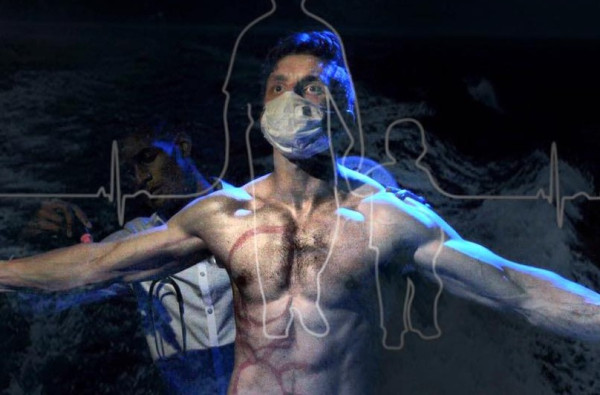 My EQView feature this week is a review of Beetles from the West at the Hope Theatre, a new play that delves deeply into the complex issues of masculinity, men’s health, and prostate cancer. It is an exceptional new play, very powerfully performed, very much from the heart. It is the best of what the fringe has to offer and I am awarding it a maximum five shining stars!

My EQView review of Beetles from the West at the Hope Theatre can be found here:
http://eqview.com/beetles-west-review/

BEETLES FROM THE WEST - REVIEW

Beetles from the West is a new play that delves deeply into the complex issues of masculinity, men’s health, and prostate cancer.

As you enter the theatre, you walk in on a tense scene. A young man and a young woman are in a hospital waiting room, the young man is pacing the room, and you can cut the air with a knife. Your eyes are drawn to the clock on the wall, as the hands crawl around slowly. You are thrust into the heart of the action before the play has even started.

When the play begins, you learn the two young people are Boyd and his girlfriend, Jenny, who are waiting to hear news about Boyd’s father, who has been rushed to hospital. After what feels like an eternity, a young doctor enters the room to explain what is happening. Boyd’s father is very ill. The doctor is awaiting test results, but it appears likely Boyd’s father has prostate cancer. The doctor needs the test results to confirm the diagnosis and to see how far the cancer has spread.

This news hits Boyd like a bombshell. His father is the one who has brought him up and who has always been there for him. Boyd’s father is his rock and the firm foundation on which his life has been built. Boyd looks up to his father and idol worships him. His father was a soldier, and he has always been tough, fit and strong – he has never been sick in his whole life. He is a giant in Boyd’s eyes and invincible. Boyd is very suspicious of the diagnosis – he simply cannot believe his father has cancer.

As the news sinks in, Boyd’s initial denial turns to anger. He is angry with his father for ignoring the warning signs, for not talking to him about his illness, and for not seeking medical help earlier. And Boyd is angry with himself for not noticing something was wrong. If only, if only …

Beetles from the West explores many of the complex issues surrounding cancer. At first, Boyd says his father is a soldier and he will fight cancer and win. But cancer should not be seen as a battle to be fought and won, because this diminishes those whom it kills, implying they are weak. Some cancers are passed down through the generations, and cast a long shadow over the lives of children, who worry about their genetic inheritance. Despite all the recent scientific and medical advances, the C word continues to strike terror into people’s hearts and remains a disease that is greatly feared.

One of the play’s real strengths is the portrayal of the relationship between Boyd and Jenny. As they wait for the test results, they pass the time by playing a game of monopoly. This enables us to see the dynamics of their relationship, which is very modern, and grounded in equality. Boyd and Jenny have a strong, loving and fun relationship. We see the genuine love they have for each other, even when put to the test under stressful circumstances. We know Boyd’s dad really loved Jenny as a daughter, because he welcomed her into the family, and asked her to look after his son.

Jenny’s monologue gives us an insight into what makes her such a strong woman. As she recalls her childhood and her teenage years, we learn her father had clinical depression, and Jenny had to care for him and support him as best she could. It was almost as though she were the parent in that relationship, taking care of her father, not vice-versa. This is the mirror image of Boyd’s relationship with his father during his formative years.

The doctor returns to confirm the devastating news – it is cancer, the cancer has spread, and the illness is terminal. Boyd’s father has been living with the illness for a long time. He has been experiencing problems, but has kept these hidden, not sharing his burden, not talking to anyone, and not seeking medical help. This has meant the disease has taken root, has spread, and is now terminal. Boyd’s father will die, and this death could have been prevented, if his father had only sought medical help sooner.

Boyd is devastated to learn the diagnosis and the prognosis, and the news is even harder to bear knowing his father could have had a very different outcome if he had only spoken to someone or sought medical help earlier. Boyd is grief-stricken, holding on to Jenny for comfort and support.

There are two incredibly powerful performances in this play – from Ryan Penny playing Boyd and Shian Denovan playing Jenny. Both actors are exceptional in their individual roles; bring real depth and warmth to the relationship between Boyd and Jenny, making it very believable; and perform their monologues from the heart. They were both outstanding.

Beetles from the West observes the classical or Aristotelian unities for Drama – unity of action, a play should have only one main plot/storyline; unity of place, a play should occur in a single physical place; and unity of time, the action in a play should take place over no more than 24 hours. The play’s focus is on the prostate cancer diagnosis for Boyd’s father and its effect on Boyd and Jenny; the play takes place in a hospital waiting room; and the action takes place over one afternoon. This makes the play much more hard-hitting and immediate.

In summary, Beetles from the West was an exceptional new play, very powerfully performed, very much from the heart. It contained important messages about masculinity, men’s health and prostate cancer, highlighting the need for men to talk about their health problems, and to seek medical help when needed, without seeing this as a sign of weakness.

I think this is what theatre should be all about – sharp new writing, powerfully performed, immediate and impactful, tackling current social issues, and seeking to make a difference. This is the best of what the fringe has to offer and I am awarding it a maximum five shining stars!

Beetles from the West by Falling Pennies Theatre Company plays at the Hope Theatre (Islington) until Saturday 23 July.