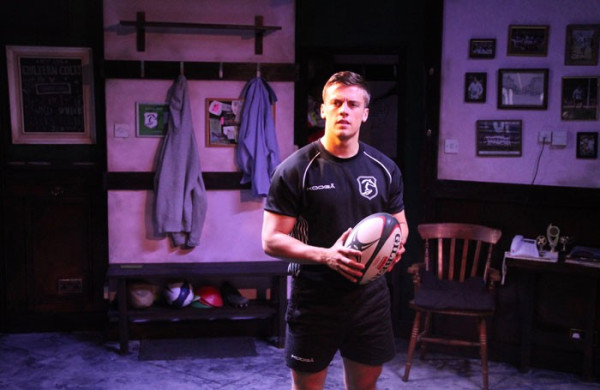 My EQView feature this week was a review of Odd Shaped Balls at The Old Red Lion Theatre, a new play which tackles the complex issue of homophobia in sport. Short, sharp, and powerful – it packs a punch! The writing was sharp as a pin, Matthew Marrs gave a truly exceptional performance, and the very clever set simply took my breath away. One of the best fringe shows I have seen in a long time. 5 shining stars!

My EQView review of Odd Shaped Balls at The Old Red Lion Theatre can be found here:
http://eqview.com/odd-shaped-balls-review/

Odd Shaped Balls is a new play, a one-man show, which tackles the issues of homophobia and sexuality in sport, and the pressures of intrusive press and social media attention into the private lives of our sporting heroes.

The play opens with a win for the Chiltern Colts and promotion to the Premiership. James Hall is one of their star players, popular with his coach, his team mates and the fans. As the team celebrates its promotion down the local pub, you get a real sense of the macho locker room culture that exists, orientated around drinking and women. Premiership rugby stars are expected to be straight, and to either be a womaniser or to have a beautiful girlfriend/wife in tow.

James’s personal life at this point is … complicated. He has a steady girlfriend, but he has also embarked on a relationship with a man. With the team’s promotion to the Premiership, media interest in the players rises. Stories start to circulate on social media that James is in a relationship with a man, and there is a danger the press will follow the lead and break the story.

James’s life is turned upside down overnight, as he has to consider whether he is going to make a statement and go public, and what he is going to say. He also has to deal with the repercussions of the breaking story and his “outing” with his girlfriend, his parents, his family, his teammates and his friends. Is he gay?, how long has he known?, has he been living a lie?, and why hasn’t he said anything sooner? are questions now directed at James by his nearest and dearest. James’s instinctive reaction is to run and hide, but he knows he has no choice but to stand and fight. He does a media interview and confirms the story.

James and his coach decide to try and ride out the storm, and James plays in the match on Saturday. Whilst progress has been made, homophobia still lurks in sport and rugby, amongst players and fans. James’s forced disclosure puts him under a lot of pressure, and his performance is under the microscope. Homophobic chants emerge from the terraces, making James lose his concentration and focus, and putting him off his game. At the end of the match, the coach decides he has no choice but to rest James for the next few matches. James can no longer play the game loves and he is cut off from the world he knows. Realising everything he has lost, James breaks down and cries.

The play explores the idea of whether it Is possible to be a successful out gay rugby player, or whether you have to hide your sexuality if you want to succeed in the game. Times moves on, James overcomes his baptism by fire, and is able to return to the game, recover his form, and succeed again. James asks people to judge him by his performance on the pitch in the game that he loves. James emerges from the scandal as someone with integrity, who is true to himself, and who can be a role model for others coming up through the game. 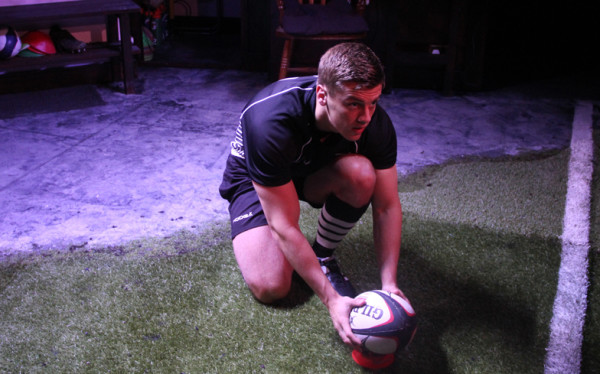 Sport in general, and rugby in particular, holds absolutely no interest for me, but I was gripped from start to finish by this play because of the quality of the acting and the storytelling. The production only runs for an hour but it packs a lot of content into its short running time, and explores complex themes with sensitivity and depth.

This is a one-man show and the play rests on the very broad and capable shoulders of Matthew Marrs. Marrs is exceptional in this piece, playing all the characters – James, his Dad, his coach, his teammate, his boyfriend, his girlfriend, the press pack, and everyone else! He changes, chameleon like, from one character to the next in the blink of an eye, but you are never in any doubt which character he is playing. And each character has real-depth. Despite the serious subject matter, there is a lot of comedy in the piece, and Marrs is able to capitalise on all these comedic opportunities. Marrs’s performance is a real tour de force.

I also have to give a special mention to the very talented set designer as the set was ingenious. The theatre space was very small, and yet the set incorporates a pub, a locker room, a living room, an office, and a rugby pitch – all the key locations needed for the play. It was an incredibly clever set, and was one of the best set designs I have seen on the fringe circuit.

If I have a minor gripe with the production, it was the lighting, which was a bit too frenetic for my taste. I found the constant lighting changes distracting, and it made it harder for me to focus on the content of the play.

In conclusion, I thought Odd Shaped Balls was stunning. The short play explored the complex issue of homophobia in sport with real depth. The piece was short, sharp, and powerful – it packs a punch! The writing was sharp as a pin, Matthew Marrs gave a truly exceptional performance, and the very clever set simply took my breath away. One of the best fringe shows I have seen in a long time and I have no hesitation in awarding it a maximum 5 shining stars!