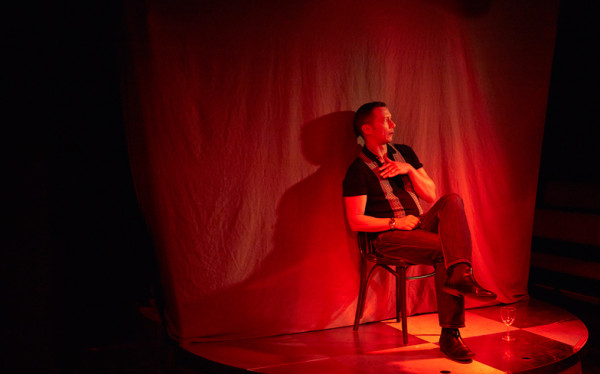 My EQView review of The Chemsex Monologues at The King's Head Theatre can be found here:
http://eqview.com/chemsex-monologues-review/

The Chemsex Monologues is a powerful piece of new writing by Patrick Cash, which played at the King’s Head Theatre last week, exploring the notorious chemsex scene.

The Chemsex Monologues is my preferred style of theatre – a small and intimate theatre space (so the audience is immersed in the story and the action), minimal props and a sparse set – a single chair. It is down to the actors to inhabit their roles, to engage the audience, and to deliver the performance. And all four actors in this piece (Richard Watkins, Denholm Spurr, Charly Flyte, and Matthew Hodson) delivered very powerful and moving performances.

The actors take it in turns to deliver their monologues, and there is only ever one actor onstage at any time. All four actors were able to command the stage, moving around so they were including everyone, speaking to everyone, and making eye-contact with everyone. They transfixed me and held my attention.

The Chemsex Monologues is a clever piece of writing because the four characters have interlocking and interconnecting stories. As the piece plays out, each monologue adds a new layer, and you get multiple points of view on each character and each story. Each monologue is one piece of the jigsaw puzzle, and as the evening goes on, you start to construct a picture as you fit the different pieces together. The piece starts and ends with the same character too, so it feels as though you have completed the circle.

The Chemsex Monologues explores the chemsex scene by focusing on the stories of four individuals (Unnamed narrator, Nameless, Fag Hag Cath, and Daniel), who have been exposed to the scene in different ways. Each character comes onstage, in turn, and speaks directly to the audience, telling them their story.

Fag Hag Cath could be a comedy character in the way she presents herself. But as she tells her story, you see how much she cares about her gay best friend, Steve, and how much his friendship means to her. As Steve gets more involved in the scene, taking more chems, his physical appearance deteriorates, he takes Cath and her friendship for granted, he says the most hurtful things about her, and he no longer goes round to see Cath’s toddler daughter, Grace. So the chemsex scene changes Steve completely, ruining his health, and robbing Cath of her best friend, and Grace of her favourite uncle.

My favourite character was Daniel, brilliantly played by Matthew Hodson. Daniel is in his 40s, a sexual health worker, laden down with the tools of his trade (condoms and lube), gearing up for another Pride Parade, and new to the chemsex scene. He is at his first chemsex party, but he is fully-dressed and much prefers a glass of red wine to the chems. His lack of enthusiasm for the chems may be because, as a sexual health worker working in a clinic, he will have witnessed only too often the damage wrecked by chems on young gay lives.

Given its subject matter and content, this piece could have been dark and depressing, but the writing and the playing are very skilful, there are many funny lines and comic moments dotted throughout the piece, and this keeps the audience engaged and entertained. As you listen to their individual stories, you get to know the characters, and you empathize with them, because they are flawed and imperfect like you. And through these individual stories, you develop an understanding and appreciation of the chemsex scene, of its many attractions and its dangerous pitfalls.

The Chemsex Monologues is a rare beast – a piece of new writing that informs, educates and entertains. An incredibly powerful, moving and funny piece of writing, superbly performed throughout. Highly recommended.

The Chemsex Monologues played at the King’s Head Theatre (Islington, London) from 17 to 21 May 2016.

The Chemsex Monologues has finished its current run but I am reliably informed it will be back!

For more information about The King's Head Theatre, follow the link:
http://www.kingsheadtheatre.com/
Collapse