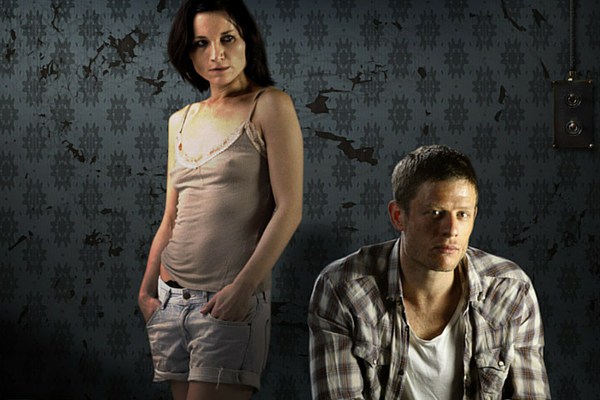 My EQView feature this week was a review of Bug at Found111, starring James Norton and Kate Fleetwood. Bug got under my skin, it unsettled and disturbed me, left a real imprint on my psyche, and will no doubt give me nightmares for weeks to come! Claustrophobic, intense, dark, chilling, heart-stopping – Bug packs a real punch. Highly recommended.

My EQView review of Bug at Found111 can be found here:
http://eqview.com/bug-review/

Bug is set in a motel room in Oklahoma City over one summer. Agnes is holed-up, in hiding from her violent ex-con ex-husband, seeking solace in drink and drugs. A stranger, Peter, arrives.

So far, so simple. But the simple structure of Tracy Letts’s play hides a very dark nature. The play takes on a myriad of complex social issues including vulnerable adults, loneliness, isolation, fear, paranoia, mental illness, drink and drugs, physical and emotional abuse, and … Bugs!

This Bug revival is playing at Found111, a new theatre space for London, housed in the former Central St Martins School of Art at 111 Charing Cross Road. This is my second visit to Found111 and, once again, this theatre space is pitch-perfect for this play. The theatre space is small, intimate and cramped – you are “in” the motel room with the actors. It is played in the round, and this draws you in and makes you feel part and parcel of the action.

Bug opens with Agnes (Kate Fleetwood) in a motel room, indulging in drink and drugs, to forget her troubles and the fact her ex-con ex-husband has tracked her down and could show up whenever he needs a place to stay. She meets Peter (James Norton), an ex-soldier, who appears to be a loving, kind and gentle giant, in direct contrast to the abusive, violent and aggressive behaviour of her ex-husband. Agnes and Peter, two isolated individuals, embark, very tentatively, on a relationship. The play could be about the healing and redemptive power of love.

But, unknown to Agnes, Peter has his own baggage and his own problems, which soon become apparent. It all starts innocently enough. Peter starts seeing Bugs. Just one Bug at first, but their numbers start to swell. Agnes cannot see them at first, but Peter’s absolute insistence that they are real becomes increasingly hard to fight. Although Peter is suffering from paranoia, which may be a result of his wartime experiences, Agnes is forced to give in to Peter’s reality. Together, they try to rid the room of the Bugs. 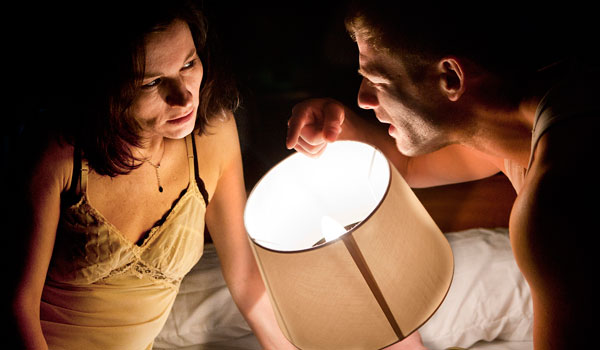 Things take a much darker turn after the interval when Peter’s mental state deteriorates and he explains the Bugs are not coming from outside. Peter believes he has brought the Bugs into the motel room because they were implanted into him by the State when he was convalescing in a military hospital. The only way he can be free of the Bugs is to cut them out of himself.

A couple of scenes that follow are deeply disturbing and excruciating to watch, and I found myself squirming in my seat, putting my hands up to my face, and peeping through my fingers. I am almost certain it is the most distressed I have felt watching a play. This was down to the quality of the acting, and was heightened by the intimate theatre space and the close proximity of the audience to the actors and the action on stage.

Peter is a totally different person when he is in the grips of paranoia. His behaviour becomes much more confrontational, challenging and uncontrollable, and he is transformed from a gentle giant into a very frightening presence in the small motel room. He resembles a pressure cooker waiting to blow. The danger is heightened by the physical contrast between James Norton, who is very tall and well-built, and Kate Fleetwood, who is thin as a rake.

As the play unfolds further, we learn of the tragedy in Agnes’s life – the past she drinks and indulges in drugs to forget. Her son went missing when he was a little boy, and Agnes doesn’t know what happened to him, or whether he is dead or alive. This means she is still constantly searching for him, even though so many years have elapsed. She confides her story to Peter.

Sadly, whether consciously or not, Peter is able to exploit this element of Agnes’s personal history, to weave it into his paranoia, to explain why they have both been selected by the State to be implanted with Bugs, and why they are being watched and are under surveillance. Agnes is willing to believe anything that may help her find her son and she is in love with Peter so, once again, it is easier to buy into Peter’s reality than to fight it.

Things come to a head when Dr Sweet, Peter’s doctor from the military hospital, the same doctor Peter claims has implanted him with Bugs, arrives at the motel room to take Peter back into hospital. As Agnes and Peter believe they are being overrun with Bugs, and with the forces of the State breaking down their door, Agnes and Peter make one last stand, and follow the only means of escape they see open to them.

There is an ensemble cast of five, and all of the performances were extraordinary, but special credit has to go to James Norton and Kate Fleetwood, who both gave incredible, impassioned, powerhouse performances. The impact of this play, and the final knockout punch it delivers, rests on the performances of the two lead actors, which were flawless.

Bug got under my skin, it unsettled and disturbed me, left a real imprint on my psyche, and will no doubt give me nightmares for weeks to come! Claustrophobic, intense, dark, chilling, heart-stopping – Bug packs a real punch. Highly recommended.

Bug plays at Found111 until Saturday 14 May.

For more information about Bug, follow the link:
http://found111.co.uk/bug/

For more information about Found111, follow the link:
http://found111.co.uk/
Collapse