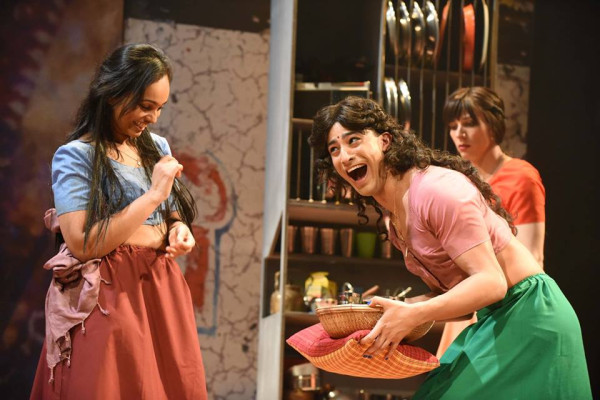 My EQView feature this week was a review of The House of In Between at Theatre Royal Stratford East, a new play exploring the hidden lives of the Hijra community (India’s third gender) in modern day India.

My EQView review of The House of In Between at Theatre Royal Stratford East can be found here:
http://eqview.com/2016/04/26/the-house-of-in-between-review/

THE HOUSE OF IN BETWEEN - REVIEW

The House of In Between, currently playing at the Theatre Royal Stratford East, is a new play written by Sevan K. Greene, exploring the hidden lives of the Hijra community in modern day India.

Hijras are India’s third gender. In past times Hijras were revered across Ancient Asia and Arabia, and in modern day India they try to follow their ancient customs and continue with their traditional way of life. They live in Hijra communities, earning their living through dancing, entertaining, and bestowing blessings on newlyweds and newborns. But Indian societal attitudes towards Hijras are changing. Hijras face prejudice and discrimination, and can find themselves shunned, reviled, and excluded. Hijras are also vulnerable to abuse, rape and murder. This increasingly dangerous world has driven many Hijra communities underground.

The House of In Between opens in a Hijra Household, where all the Hijras are rehearsing their latest song and dance numbers, presided over by the matriarch Uma. This is a great way to open the play as it gives you an insight into the individual personalities of each of the Hijras, you see how each character relates to the others, and you obtain an understanding of the pecking order in this Hijra Household. From the opening scene, you get a real sense the Hijras are a tightly knit clan/family – each Hijra has a role, they all help and support one another, and together they are greater than the sum of their parts. But the harmony in the Hijra Household will soon be shattered by the arrival of a stranger. 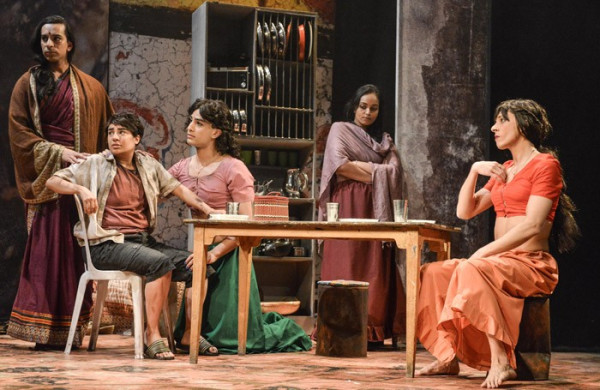 Later that evening, a stranger named Dev arrives at their door asking for help, and Uma decides to allow the young man into the Household. This one simple act sets in train a series of events which could lead to the break-up of this Hijra Household and the ending of their traditional way of life.

In a changing world, with their traditional sources of income drying up, you saw how the Hijras often had to rely on begging and sex work to make a living. You also got a real sense of how, shunned and rejected by mainstream society, Hijras had to live life in the shadows, with their communities driven underground. Dangerous alliances had to be made with corrupt policemen and criminals in order to survive.

As the play explored a Hijra’s life in more depth, and specifically the life of this Hijra Household, you understood this was a marginalised group of people, a vulnerable community, trying to carry on ancient traditions, but living in a modern world where their culture, traditions, communities and lifestyles were increasingly under threat. The clash between India’s ancient traditions, and the new modern India, was highlighted.

Although the play’s plot had strong Bollywood influences, and became more melodramatic as the play went on, using many of the clichés of a mainstream Bollywood film, the play nevertheless gave an insight into the life of the Hijras, their Households, and their communities in modern day India.

The standout performance was Gary Wood playing Shakti. Shakti was this clan’s star performer, the most beautiful, the most desired, the best dancer, and the Hijra “wife” to their most generous client. But Shakti knows time will take its toll, her looks will fade, and her clients will move on to fresh meat. When she notices this beginning to happen, hell hath no fury like a woman scorned, and the clan starts to fracture and fall apart.

Shakti is intelligent and independent, and she is also a rebel, asserting her position in the clan, and being the most demanding in terms of making her own choices and decisions about her work, and keeping as much of her own money as possible. This brings her into direct conflict with Uma, the Head of the Household, and Shakti’s independence means she runs the risk of being thrown out of the House. Wood brought an independent spirit and a feisty nature to the role, and a great deal of femininity, sensitivity and vulnerability to the part, and you would have to be very hard-hearted not to empathise with Shakti and her plight.

There were very strong supporting performances from Esh Alladi as Uma, Ashraf Ejjbair as Amrita, and Akash Heer as Pooja, all giving very convincing performances as Hijras. But I felt casting Lucie Shorthouse as Dev was a missed opportunity. Shorthouse was unconvincing as a young man and, if it is obvious from the beginning that Dev is a young woman disguised as a young man, the play does not work as well, and loses some of its power and impact.

In terms of the staging of the production, I have to give a special mention to the Indian music, songs, and dance, featured throughout the play. They were threaded through the production, were part and parcel of the play and the story it was telling, and all these elements really enhanced this theatre experience for me.

In summary The House of In Between is an engaging play, with a thrilling storyline, bursting with Indian music, song and dance. It gives you a real insight into, and appreciation of, the hidden lives of the Hijra community in modern day India. All credit to the Theatre Royal Stratford East for staging a new play about India’s third gender, a marginalised group whose voices are so rarely heard.

The House of In Between plays at the Theatre Royal Stratford East until Saturday 30 April 2016. Follow the link for more info:
http://www.stratfordeast.com/whats-on/all-shows/the-house-of-in-between/
Collapse