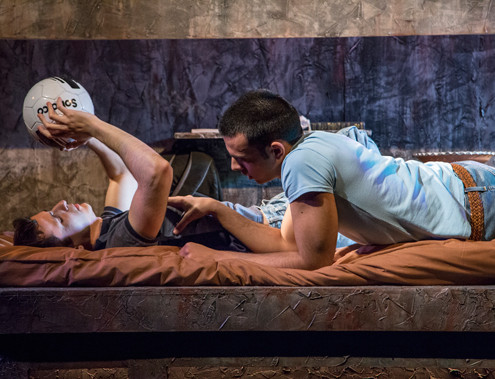 My EQView feature this week was a review of Haram Iran at Above the Stag theatre, a play inspired by the short lives of Ayaz Marhoni and Mahmoud Asgari, where I was transported to Iran to experience life under a religious dictatorship where English books are haram (forbidden).

My EQView review of Haram Iran at Above the Stag Theatre can be found here:
http://eqview.com/2016/04/13/haram-iran/

Haram Iran is a new play inspired by the short lives of Ayaz Marhoni and Mahmoud Asgari, written by Jay Paul Deratany and directed by Gene David Kirk, which has its European Premiere at Above the Stag Theatre in Vauxhall.

In 2005, two Iranian teenagers, Ayaz Marhoni and Mahmoud Asgari, were hanged in Justice Square in Mashhad, Iran. Facts about the case are scarce and are heavily contested. Some believe the teenagers were hanged for being gay. But the formal charge brought against them was the rape of a 13 year old boy.

Haram Iran imagines the lives of Ayaz and Mahmoud in the years leading up to their arrest, imprisonment and hanging. It tells the story of two teenage boys, with very different interests and family backgrounds, who meet and get to know each other, and form a deep bond through conversations and sharing confidences.

Right from the very beginning, Haram Iran draws you into this story and this world through the two lead characters, Ayaz and Mahmoud. Ayaz loves books and Mahmoud loves football, and a school tutor asks Ayaz to help Mahmoud with his academic studies.

The two young men come from very different families. Ayaz’s mother, Mrs Marhoni, is an educated woman, having been a student in Paris before the Iranian Revolution. She feeds Ayaz’s mind by giving him English books, which she has loaned from a bookseller who has a secret hoard of forbidden books in his basement. She wants her son to be able to think for himself.

Mahmoud’s family appears to be much stricter and more conventional. Obedience is more important than independent thinking. Mahmoud’s father enforces discipline within the family by regular beatings, which Mahmoud readily accepts as part and parcel of daily life. There are many things that Mahmoud just accepts, without questioning, until he starts spending time with Ayaz.

The first half of the play focuses on the nurturing relationship Mrs Marhoni has with her son, Ayaz, and the blossoming friendship between Ayaz and Mahmoud. As time goes on, Mahmoud actually prefers to spend time talking about books with Ayaz, rather than playing football with his old friends. As their friendship deepens, and they spend more time in each other’s company, gossip and rumours start to surface. 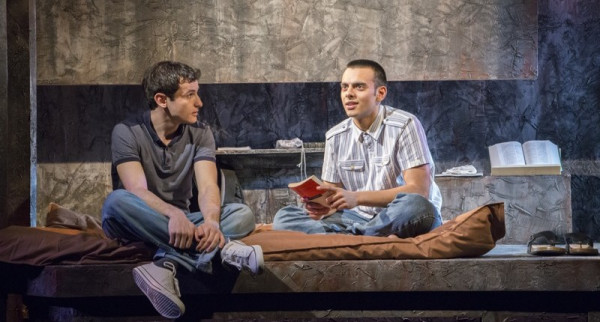 Watching the play, what struck me was how restrictive Iranian culture and society had become after the Revolution. So many things were “haram” meaning forbidden. Books written in English were haram because they could contain dangerous ideas and, being written by infidels, were a corrupting influence and evil. This state of affairs saddened me because, before the Revolution, Iran had been one of the most progressive nations in the Middle East.

From the conversations between Mrs Marhoni and Ayaz, and between Ayaz and Mahmoud, you got a real sense of what it was like to grow up in, and live under, a religious dictatorship, where freedom of thought and expression was suppressed, and you were told what to think, feel and say. You saw how books telling of life on a desert island, or life in the West, were a means of escape and refuge. The books opened a door onto a world which promised a better life.

The second half of the play was much darker, focusing on Ayaz and Mahmoud’s arrest, imprisonment and hanging. Floggings, torture, false confessions, sodomy, rape and cruelty all formed part of the prison experience. The nightmare of an Iranian prison was embodied by a sadistic jailer who made their lives hell. 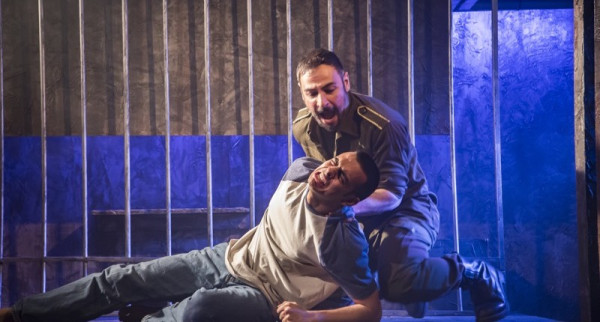 The trial scenes, where a woman’s testimony counts for next to nothing, where false confessions are given undue weight, and where evidence is deliberately manipulated and/or fabricated, is soul-destroying.

You are left in no doubt, that in a court of Sharia law, the dice is loaded right from the start. The judge’s mindset is one of absolute certainty, leaving no room for doubt. The predetermined verdict is returned speedily, and that verdict is guilty. The ending you have been expecting since the beginning is shocking, brutal and bleak.

Regardless of what crimes Ayaz and Mahmoud did or did not commit, they were under 18 at the time, and should never have been hanged.

Viraj Juneja plays Ayaz in his professional theatre debut. Juneja was excellent in the role and succeeded in engaging and charming the audience. He portrayed Ayaz as a passionate young man; a kind and caring friend; thirsty for books and for knowledge; who dreamed of escaping to a different world, a better world. I was really taken with, and moved by, his sensitive and nuanced performance.

Silvana Maimone plays Mrs Marhoni, Ayaz’s mother, and I was excited to see a lead female role so strongly written and so powerfully acted. Mrs Marhoni is the one who introduces Ayaz to English books, who wants his imagination to fly and his mind to be free, who encourages his friendship with Mahmoud, and who steadfastly stands by her son throughout his imprisonment and trial. I loved the line where the jailer says she should be ashamed of her son and hide her face in shame, and she declares she is very proud of her son, uncovers her head, and says she will walk in the sun. Maimone really brought Mrs Marhoni to life and it was a joy to see such a strong lead female role so powerfully delivered.

Finally, I have to give the set a special mention. It conjured up the look and feel of the Middle East, even though we were underneath the Arches in Vauxhall, and also managed to convey the prison by cleverly incorporating chains and a metallic tint into some elements of the set. It definitely succeeded in transporting you to a different culture, society and world.

In summary, Haram Iran is worth seeing to get a sense of what life is like living in a very different culture, in a different society, and under a very different regime. A regime where you are told what to think, what to read, what to say, and how to behave. A regime were books are banned. A regime were so many things are haram (forbidden). A regime which hangs minors after a pantomine trial. I left the theatre with a lot to think about, and it definitely made me more appreciative of, and thankful for, the life I have.

Haram Iran plays at Above The Stag Theatre until Sunday 1 May. Follow the link for more info:
http://www.abovethestag.com/whatson/haram-iran/

Above The Stag Theatre is the UK’s only full time professional LGBT theatre. Follow the link for more info:
http://www.abovethestag.com/
Collapse