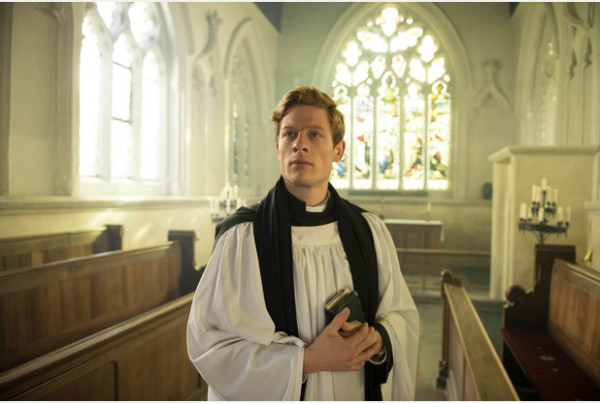 My EQView feature this week was about the ITV series Grantchester, explaining why I love it and why it is one of the best crime dramas on TV.

My EQView feature on Grantchester can be found here:
http://eqview.com/grantchester/

GRANTCHESTER - THE SECRETS OF ITS SUCCESS

Grantchester Series 2 begins this Wednesday and I wanted to write a feature about why I love Grantchester so much and what made it, for me, one of the best TV series in 2014 (when it first aired on ITV).

Grantchester, for the uninitiated, is a crime series/murder mystery series, set in 1950s Grantchester, Cambridge, England, post Second World War, where the crime solving team is made up of a Vicar, the Reverend Sidney Chambers, played by James Norton, and a police officer, Detective Inspector Geordie Keating, played by Robson Green. The strong bromance between the two leads is undoubtedly one of the draws of the show.

Here, in no particular order, are the key elements of the show, which make it what it is:

The beating heart of Grantchester is the strong male friendship, the crime fighting partnership, and the bromance between the Reverend Sidney Chambers, a Parish Priest, and Detective Inspective Geordie Keating, a police officer. 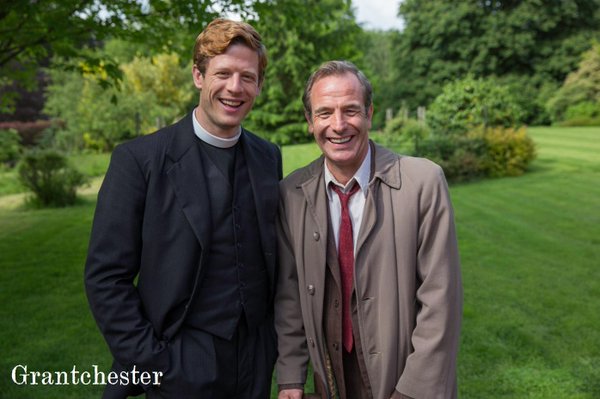 Unlike the Holmes and Watson partnership, neither is the cleverer one, Sidney and Geordie are very well matched intellectually, they just bring different skills to bear when it comes to solving crime. Geordie is the focused detective, pounding the streets, chasing down the leads, and looking at the evidence, whereas Sidney is much more intuitive, and gets his breaks because people are more willing to trust him and confide in him. You need both men, working together in harmony, to put together all the pieces, and solve the crime.

One of the real delights of the series is this growing friendship between Sidney and Geordie. When Sidney first appears on the scene, Geordie sees him as a nuisance and inept, an interfering busybody out of his depth. But as Sidney persists and stays the course, he wins Geordie over, gaining his admiration and respect. Sidney comes to relish their adventures together and the thrill of the chase, and Geordie comes to rely on his crime-solving buddy. Down the pub, downing pints together, they bond over beer and backgammon! They become firm friends and open up to each other, Sidney even revealing to Geordie at the end of Series One why he is haunted by his War memories. By then, we are in no doubt that Sidney and Geordie have a very special friendship and a deep bond binds them together.

There is a long tradition of crime series/murder mystery dramas for the weekday evening slot on British TV, and Grantchester is very much in this tradition. I am a real sucker for trying to solve a fictional murder in a beautiful English village, with a host of intriguing characters, all of whom have a dark secret to hide. Everyone fancies themselves as Sherlock Holmes, so it is always fun to see if you can identify the murderer and solve the crime before the TV detectives do.

Grantchester, the Cambridgeshire village where the story is set, is a character in itself. The best murder mystery series are often set in seemingly idyllic English villages, in small communities where everyone knows everyone else, their business and their family histories, and where busybodies abound and gossip flourishes. The Parish Church, where Sidney is based, lies at the heart of the village and, in the 1950s, it is where the community congregates every Sunday to talk, to exchange news, and to share successes and failures. Grantchester, the beautiful village surrounded by the English countryside, and the dark secrets and murders buried deep within this idyll, make for an intoxicating mix.

Ironically, being a Londoner, I was really looking forward to the episode set in London (episode 5) but I felt Grantchester lost something of its soul in moving out of its home setting. It is definitely at its strongest when the action is set in, and around, Grantchester, because then the episode is populated with all the familiar characters we know and love, all of whom are key to Grantchester’s success.

The Shadow of War

Grantchester is set in 1950s England, in the immediate aftermath of the Second World War, and the shadow of war looms large over all of the characters. Both Sidney and Geordie are war veterans, haunted by what they did, and the sights they witnessed, during the war. Sidney, as a leader, holds himself personally responsible for the death of one of his men, and he drinks to forget. The fact Sidney has his own personal demons to fight, that he drinks to forget, and his darker depressive side in general, make for a much more interesting and believable lead character. 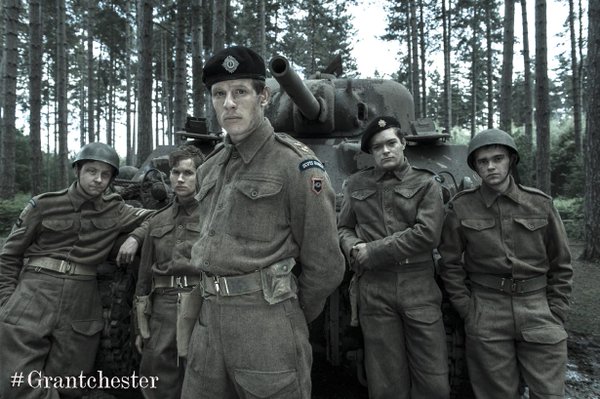 War memories feature in every single episode in Series One and this shows how much War permeated everyone’s lives and memories, men and women. Whilst Sidney is haunted by the personal part he played in the War, Mrs Maguire is equally haunted by the sons she lost and the husband who never returned.

Sidney and Geordie, firm friends, have very different home lives. Sidney is a bachelor, living on his own, whilst Geordie is a married man, with a wife and a house full of children. There are a number of women in Sidney’s life, much to Geordie’s envy!

First there is Amanda, the woman we all think Sidney should be with. Amanda and Sidney are very good friends, they are happy in each other’s company, they understand each other, and they make a handsome couple. But Sidney is only a Parish priest and all he has to offer Amanda is friendship. Amanda grows tired of waiting, and accepts Guy’s marriage proposal. Guy comes from a good family and can offer her a better life. At the start of the first episode we see how happy Sidney and Amanda are together and yet, by the end of the episode, Amanda is engaged to another man. She is the one that got away. As Series One draws to a close, Amanda’s wedding day is fast approaching, and we are left wondering if Sidney has left it too late or if he can come good and save the day.

Having lost Amanda to Guy, Sidney dates Hildegard for most of Series One. He gets to know Hildegard in the first episode when he is investigating the murder of her husband, he is the only Priest who will agree to take the funeral of an alleged suicide, and the two become close. Amanda and Hildegard are chalk and cheese, they are very different women, with very different personalities, and very different histories. Who is the woman Sidney is destined to be with? 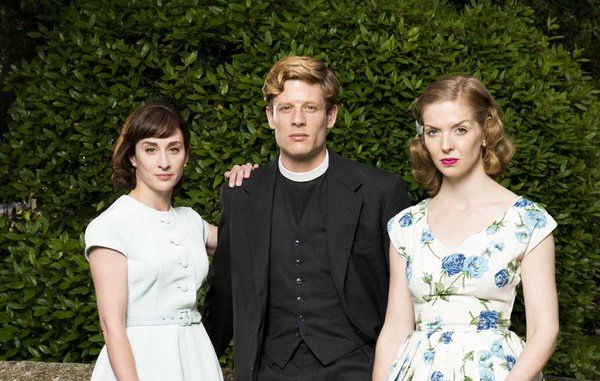 Last but not least, the icing on the cake, yet another woman enters Sidney’s life when he and Geordie have a night out in London. Sidney is drawn to the alluring jazz singer in the nightclub, Gloria, and spends the night with her. He realizes his mistake in the morning when he wakes but, nevertheless, there was something about Gloria which attracted him to her, and this provides a hint there is something missing in his relationship with Hildegard. It also makes Sidney more appealing as a character because it proves that he is only human, and has the same frailties as the rest of us.

Mrs Maguire, played by Tessa Peake-Jones, is the Mrs Hudson of Grantchester. She is the Rectory’s housekeeper and tries very hard to take care of Sidney and, much more importantly, to keep him on the straight and narrow. She never misses a chance to remind him of his Parish duties and tries to keep him out of trouble but, like Mrs Hudson, under that very tough exterior there is an equally soft centre, a heart of gold, and there is no disguising the motherly love Mrs Maguire feels for Sidney. They have a typical mother-son relationship, where they clearly care for each other, yet still can’t help winding each other up. What I like best about Mrs Maguire is that she is never backward in expressing her opinion, whether Sidney asks for it or not, and her fabulous catchphrase “What the Dickens?!”

Leonard, played by Al Weaver, is the Curate who joins Sidney’s parish during Series One. At first, he is just light relief, a comedy character, with a funny moustache, who gives the most boring sermons, sending people to sleep. But as the Series goes on, Leonard comes into his own, and we see him for the kind, caring, and considerate person he is. He is an outsider, and he is gay, and we journey with him as he struggles to reconcile his faith and his sexuality, and to accept himself for who he is. Leonard is a sensitive soul, trying to make his way in the world, struggling with his faith, his sexuality, and his conscience, and it is impossible not to empathise with his character.

Dickens is the black labrador puppy given to Sidney by Amanda when she accepts Guy’s proposal of marriage. Dickens is supposed to fill the void left in Sidney’s life by Amanda’s abrupt departure. At first, Sidney and Mrs Maguire are not sure they can cope with a dog, but Dickens rapidly steals everyone’s heart and becomes part and parcel of Rectory life. As viewers, we see Dickens growing up during Series One, and quickly becoming Sidney’s faithful and constant companion. Dickens is a firm favourite amongst Grantchester fans, many of whom prefer him to his human co-stars! 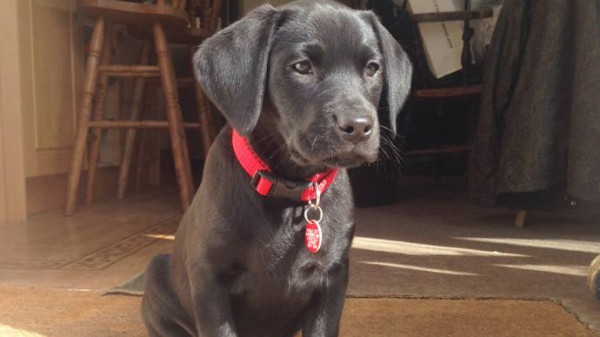 Finally one of the things I love about Grantchester is that, although it is set in the seemingly cosy world of 1950s Cambridge, it never shies away from tackling the hot topics of the day, issues that remain just as pertinent today.

Both racism and homophobia are explored in Series One of Grantchester. We see the underlying racism prevalent throughout British society in the 1950s, which means people will always assume a black man is the thief, and the difficulties experienced by mixed race couples and mixed race families. And we see how difficult it was to be a gay man in those times, and how homosexuality had to be kept hidden, a dark secret in the closet, and the damaging impact this had on gay men, their lives and their families.