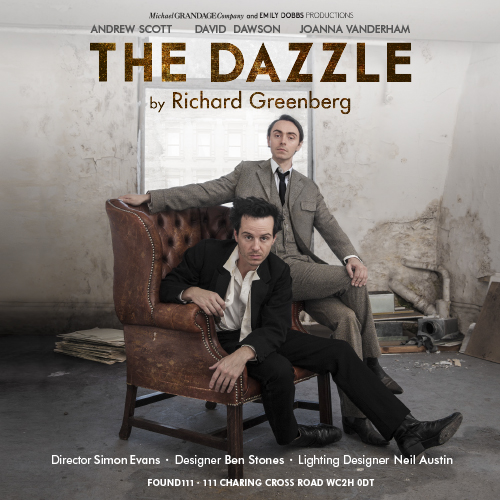 My EQView feature this week was a review of The Dazzle‬ at Found111, a play inspired by the lives of the Collyer brothers. Heart-warming, heart-stopping and heart-breaking, with dazzling performances from Andrew Scott and David Dawson. 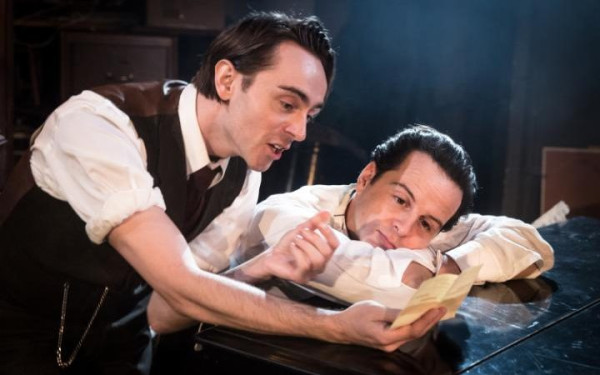 The Dazzle by Richard Greenberg is a 2002 play examining the lives of Homer and Langley Collyer (The Collyer Brothers). Its UK Premiere stars Andrew Scott, David Dawson and Joanna Vanderham, and it is playing at Found111, a new theatre space for London, housed in the former Central St Martins School of Art at 111 Charing Cross Road.

The Author’s (Richard Greenberg’s) note in the programme states:

“The Dazzle is based on the lives of The Collyer Brothers, about whom I know almost nothing”.

The Collyer brothers, were two American brothers, renowned for their compulsive hoarding, and living very isolated and secluded lives. In March 1947 both brothers were found dead in their New York home, surrounded by the 136 tons of debris, antiques and junk they had amassed. Greenberg uses these basic facts as a jumping off point to imagine the story of the Collyer brothers shared life together.

I was lucky enough to see this production twice, in December and January, and it is genuinely one of the most impactful and moving theatre experiences I have ever had.

The building and the theatre space are perfect for this play. The theatre space is housed in the former Central St Martins School of Art and, as you enter the building, and make your way up the multiple flights of steps, snaking around a derelict lift shaft, you get a real sense of a building which has a history and was a place of beauty, but is now past its prime, having fallen on hard times – a trajectory followed by the Collyer brothers over the course of the play.

When you enter the theatre space itself, you see the seating comprises individual chairs, very varied in terms of styles and sizes, each one is unique, and the seating blends into the playing space. The theatre space is small and intimate and, as an audience member, you feel as though you are in the Collyer brothers’ living room. Everyone, regardless of where they sit, is in close proximity to the actors, and this draws you in and makes you feel part and parcel of the action.

The main focus of the play is the symbiotic and codependent relationship of the Collyer brothers, Homer (played by David Dawson) and Langley (played by Andrew Scott). This relationship gives them strength and resilience, but prevents them from pursuing their own dreams and living independent lives. “Fraternal love is a powerful thing” is a constant refrain throughout the play, and is the overriding theme of the play. 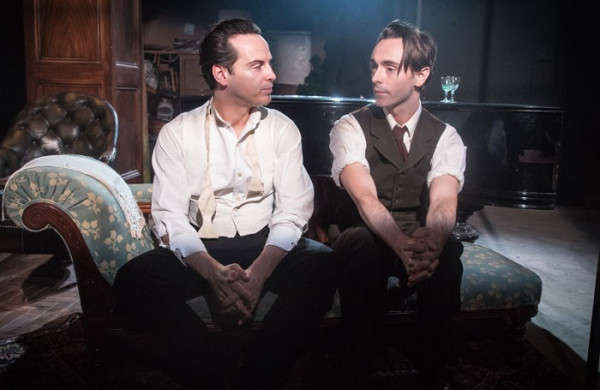 This is very much a play of two halves – the first half could be titled “promise”, and the second half “disillusion”. The characters and the set are transformed, during the interval, so they mirror and reflect the change in the fortunes and prospects of the three characters.

In the first half, we encounter the Collyer brothers as young men about town; educated, intelligent and privileged; living a charmed life; with the world as their oyster. But the seeds of future troubles have been sown – Homer has had to give up his lucrative job as an Admiralty lawyer to become Langley’s carer and to manage Langley’s career and finances. Langley is a gifted concert pianist, but he clearly has special needs and managing day-to-day life is beyond him.

The action in the first half is driven by Homer and Langley encountering Milly, a rich heiress, who could be the answer to their prayers. Milly is attracted to Langley and is one of the few people able to communicate with him on his level. Homer sees an opportunity to secure the family’s finances, and to have someone with whom he can share the burden and the reward of looking after Langley. Homer and Milly decide a marriage between Langley and Milly would be mutually beneficial, but fail to think through the implications of marriage for Langley eg leaving home, and all he knows, behind. They will all pay a heavy price for this oversight.

Homer and Langley have isolated themselves further and withdrawn from society, and society has turned its back on them. They are routinely pelted with stones and rocks by their neighbours simply because they are perceived as strange and different. Langley’s appearance is transformed – in the first half he was immaculately dressed and well turned out as a concert pianist and his jet black hair was slicked back. He now appears looking like a tramp, very dishevelled, with string tied round his waist, holes in his woollen gloves, and with wild hair. Homer’s appearance is less changed, but his circumstances are transformed – he is now almost completely housebound, never venturing outside.

Much to the brothers’ surprise, Milly re-enters their lives but she, too, is a shadow of her former self. For her, the Collyer brothers’ house is a place of safety, despite the state it is in. Unspeakable things have happened to Milly since the brothers last saw her, scarring her for life. Her appearance, like Langley’s, is transformed. She looks like an old woman, or a bag lady, she is hunched over like an old hag, and her beautiful golden hair has turned white.

Milly’s arrival shines a light on the flaws of a codependent relationship because she notices something about Homer in a flash, something Homer has been waiting for Langley to notice for years, and yet he has failed to do so. Milly’s revelation about Homer, explains why everything has fallen apart and gone to rack and ruin. When she makes the observation it seems blindingly obvious and yet I, like Langley, had failed to see something that was staring me in the face. Milly’s revelation came as a shock.

For the briefest amount of time, the play allows you to hope, and the promise of a better life for all three characters appears tantalisingly close, but this glimmer of hope is soon extinguished once and for all. Milly vanishes from the brothers’ lives as quickly as she came and all hope is gone.

The closing scene, featuring the two brothers nearing the end of their lives, is heart-breaking to watch, exquisitely played by Andrew Scott and David Dawson, and left me in bits.

In less skillful hands, the dark content of this play could have made it very depressing, but the writing and the playing in this production are very clever, there are many funny lines and comic moments throughout the play, and both actors capitalise fully on all of these opportunities. The play frequently turns on a coin, going from high comedy to dark tragedy and back again, in the blink of an eye, and this is all down to the skill of the actors.

Both Andrew Scott and David Dawson gave superlative performances. They portrayed Langley and Homer Collyer in all their eccentricity and complexity, they made you believe in the brothers’ deep and abiding love for each other and, through their heartfelt performances, they made you care about the brothers. All these factors contributed to making the Collyer brothers’ story more touching and heightened their tragedy.

This is a heart-warming, heart-stopping and heart-breaking production, which quite took my breath away. Andrew Scott and David Dawson both dazzled in The Dazzle and it was a totally unique and completely absorbing theatrical experience. Although 2016 has only just begun, I am in no doubt that this will be one of the best productions I have the privilege of seeing this year, and I have no hesitation in awarding it a maximum 5 shining stars.

The Dazzle plays at Found111 until Saturday 30 January.

For more information, check out The Dazzle website:
http://www.thedazzle.co.uk/
Collapse