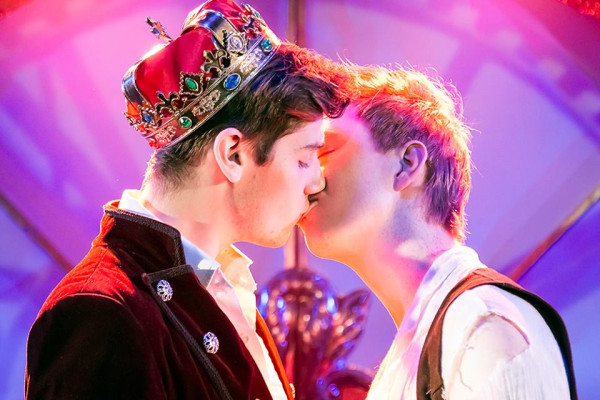 My EQView feature this week was a review of Tinderella : Cinders Slips It In‬, the latest gay adult panto at Above the Stag Theatre. I had a hugely entertaining, enjoyable and fun night out. Absolutely fabulous!

My EQView review of Tinderella : Cinders Slips It In at Above the Stag Theatre is here:
http://eqview.com/2015/12/30/tinderella-review/

TINDERELLA : CINDERS SLIPS IT IN - REVIEW

This year’s Above the Stag panto is Tinderella: Cinders Slips It In by Jon Bradfield and Martin Hooper, who have written a string of commercially successful and critically acclaimed gay adult pantos for Above the Stag Theatre.

Their pantos have a well-deserved reputation for being outrageous, silly, romantic and rude, combining long standing panto traditions, contemporary references, gay romance and comedy. Tinderella does not disappoint – it delights!

Tinderella is set in Slutvia, which means all of its inhabitants are Sluts, which makes for a strong running joke. The panto includes all the characters you would expect in a traditional Cinderella – Cinders, Prince Charming, Buttons, a Fairy, an evil stepmother, and two “ugly” sisters.

Every fairy tale needs a good old-fashioned villain, and Countess Volga (Cinders’s stepmother) makes for a great villain in this piece. At the start of the panto, she introduces us to her three former husbands, all now dead and buried, and at least one of whom she “helped” on his way. It is clear she will stop at nothing, including murder, to get what she wants, and we can boo and hiss her to our heart’s content.

My favourite characters were the sisters – Maude Escort and Nicole Ferrari. What I liked about this Cinderella adaptation was the sisters were not wicked – they each had their flaws, but they were both fabulous and fun. They provided the comic relief, drove most of the comedy, and were the life and soul of the Ball. Thanks also to Maude Escort, I was privileged enough to experience a real first – this was the first time I have ever seen a Gorilla in a production of Cinderella! (And yes, you did read that right, this production features a Gorilla in the Ball scene). 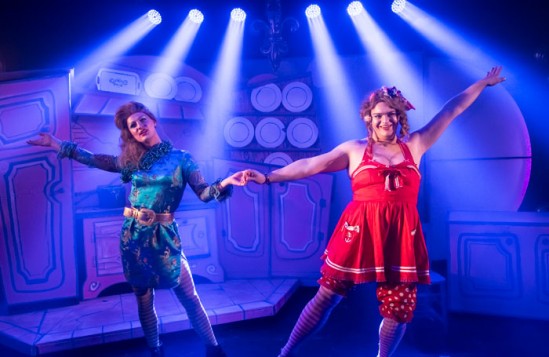 The panto ends with a big song and dance number – the Slutvian entry to the Eurovision Song Contest, performed by the two sisters. It was then that I thought – I really have seen it all!

As with all productions at Above the Stag Theatre, the sets, the props and the costumes were fabulous; the musical numbers were genius; and there was a wealth of new acting talent on display. All in all, a hugely entertaining, enjoyable and fun night out – catch it whilst you can!

Tinderella: Cinders Slips It In plays at Above The Stag Theatre until Saturday 16 January.

Above The Stag Theatre is the UK’s only full time professional LGBT theatre.

My EQView interview with the writer Jon Bradfield about his Above the Stag gay adult pantos can be found here:
http://mycroft-brolly.livejournal.com/445293.html
http://eqview.com/2015/01/09/meet-writer-jon-bradfield/