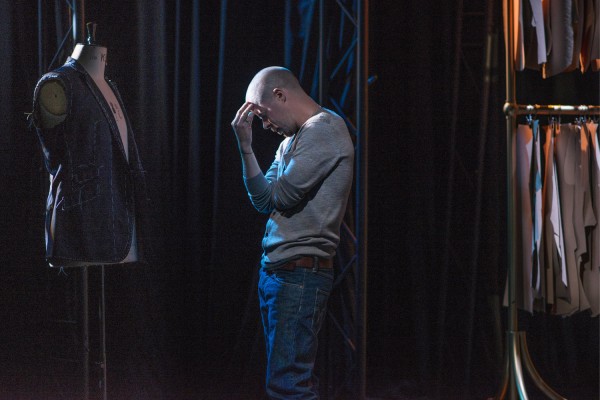 My EQView feature this week is a review of McQueen at the Theatre Royal Haymarket,
a new play inspired by the life of Alexander McQueen, Artist, Genius, Icon, Legend, the fashion visionary who broke the rules.

McQueen, a play inspired by the life of Alexander McQueen, is currently playing at the Theatre Royal Haymarket. Alexander McQueen was the fashion visionary who broke the rules: an Artist, a Genius, a British Icon, and a Fashion Legend.

This new play, written by James Phillips, is inspired by a love of the talent of the designer Alexander McQueen. It is not a documentary, nor a biography. It is a fairy story, like a McQueen show. 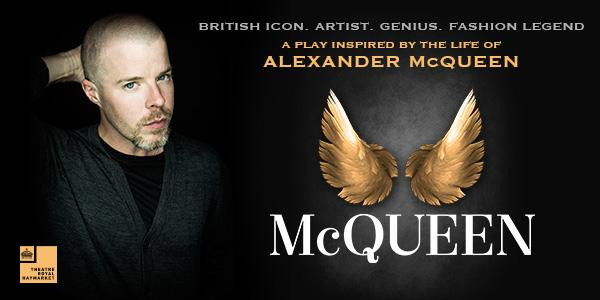 As you enter the theatre, you are greeted by Stephen Wight, playing McQueen, pacing around the stage with a belt in his hand, twisting it around in his fingers. As he paces, McQueen appears very disturbed. Given I knew McQueen committed suicide by hanging himself with his belt, this is a disturbing and shocking image to be confronted with right at the start of the show.

In the opening scene, a young woman called Dahlia breaks into McQueen’s house in search of her dream dress. We are never really sure if Dahlia is real, a figment of McQueen’s imagination, or a hallucination. Dahlia could be real or she could represent McQueen’s alter ego.

Although McQueen is initially very wary of Dahlia, (after all she has just broken into his house!), he soon warms to her. He is lacking inspiration for his new collection and decides to take Dahlia on a whirlwind tour of his life, visiting people and places which mean the most to him and are closest to his heart.

The first stop on the tour is the tailors in Savile Row where McQueen started out as an Apprentice and learnt his trade. We meet Mr Hitchcock, McQueen’s superior when he was an Apprentice. McQueen had told Dahlia that when he was working there, he had been working on Prince Charles’s jacket, and had sewn “I am a cunt” into the lining. Mr Hitchcock tells Dahlia he has heard this story and that, when Prince Charles’s jackets came back for alterations, he checked each and every one. There was nothing there. McQueen smiles and says it is little myths like this that make a brand. To help construct this brand, McQueen had taken Isabella’s advice and used his second name, Alexander, rather than his first name, Lee, for his fashion label – he reinvented himself.

In the tailor’s shop, McQueen has his flash of inspiration and suddenly “sees” Dahlia – who she was, who she is, and who she could be. He designs a dress which is a reflection not of who she is but of who she might become – a dress should be a part of you, and express who you are. There is a real buzz and excitement in the air as McQueen sets to work. In one of the most magical scenes in the production, McQueen creates and makes a dress for Dahlia, right there on stage in front of our eyes, a dress designed specifically for Dahlia, which reflects her personality, and which contains her dreams and aspirations. McQueen works his magic on the stage and this sequence literally took my breath away. The scene shows off McQueen’s imagination, his talent and his genius.

Later on, we see McQueen being interviewed by a journalist and the scene highlights McQueen’s genius and his ability to “see” women. The journalist asks McQueen to describe a woman at a nearby table, which he proceeds to do in the finest detail, deducing everything about her from the way she looks, how she sits, the clothes she wears, and her gestures. This deduction would be worthy of Sherlock Holmes. McQueen says this is a habit for him, a way of looking at people. He does this when he is working, and this enables him to see everything about a person, and glimpse into their souls. This is both a gift and a curse.

McQueen had two key women in his life – his Mum and Isabella. We meet Isabella and witness first hand the incredibly close relationship between McQueen and Isabella. McQueen is angry at Isabella for being weak and taking her own life, but he also carries around with him a burden of guilt wondering if he could or should have done more to help her. They talk about, and share their experiences of, depression, a mental illness which haunted them both. McQueen confides in Isabella that he is “not well”, black clouds are descending, and he is plagued by worry, anxiety and low moods. Isabella, having faced her own demons, is one of the few people who can truly understand.

McQueen takes photographs of Dahlia in her fairytale dress, which are then projected onto large screens on stage. For one shot, Dahlia stretches out her arms and, for the first time, we see the unmistakable marks of self-harm running along her arms. To see this projected onto a large screen is shocking and we slowly realize that Dahlia, like McQueen and Isabella, is prone to the dark depths of depression.

McQueen takes Dahlia to his Mum’s home, which for him is a refuge and a “safe house”. His Mum is upstairs, very sick with cancer. McQueen speaks very passionately and eloquently about how much courage his Mum has in fighting the cancer consuming her body, and how she is brave like a lion.

McQueen shows Dahlia the feathered golden coat he is working on. It is stunning. He makes her wear the golden coat to try and make her better, because clothes have the potential to change you inside, and to allow you to become someone else and something else. They are transformative.

The final stop in the tour is Stratford, London, where McQueen grew up, and he confesses to being a birdwatcher as a young boy, a birder. This is why feathers, birds and flight play such a large part in his collections and his designs. Whilst there, McQueen and Dahlia are lucky enough to see a peregrine falcon, a rare bird of prey. But the feathered golden coat reminded me of Icarus and his wings, and of flying too close to the sun. The fashion world is one where it is all too easy to crash and burn.

Day breaks, McQueen and Dahlia have survived the night, and Dahlia has given McQueen the inspiration and the ideas for his new collection. A new day has dawned, and life goes on, at least for the time being. But even in the excitement of the final scene, where the new collection comes to life, McQueen carries his belt in his hand, prefiguring the demons waiting in the wings and what is to come.

The play took me on a journey, along with McQueen and Dahlia, so I could witness the highs and lows, the heights of pleasure and the depths of pain, the extremes of success and failure – all integral to the rollercoaster ride McQueen was on as part of the fashion world, where you were only as good as your last collection. Something about the production got under my skin and into my blood.

Stephen Wight’s performance in the lead role is truly outstanding, and he perfectly captures McQueen’s humour, likeability, vulnerability, darkness and genius. This is a tricky combination to master but Wight nails it. He is given strong support from an excellent ensemble cast, both actors and dancers.

The stagecraft in the show – the music, the costumes, the movement, the choreography, the set, the props, the effects – were all magical, and reminded me of McQueen’s fashion shows. The play felt other worldly and dreamlike, like a fantasy adventure. This was a different type of theatre – blending storytelling, fantasy, and spectacle. Like McQueen, his designs and his shows, this play was unique and special.

In summary, this production is one of the best things I have seen in the West End this year, and it will stay with me for a very long time to come. Very dark, very powerful, very moving, and incredibly beautiful. As such, I have no hesitation in awarding it a maximum 5 shining stars.

McQueen plays at the Theatre Royal Haymarket until Saturday 17 October 2015.