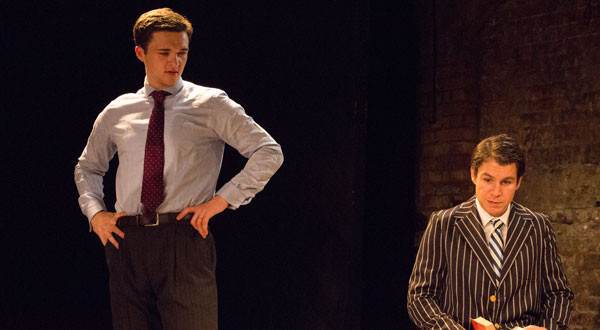 My EQView feature this week is a review of The Man Who Had All The Luck, a thought-provoking revival of an early Arthur Miller play, looking at whether a Man makes his own luck.

THE MAN WHO HAD ALL THE LUCK - REVIEW

The Man Who Had All The Luck by Arthur Miller has been revived at the King’s Head Theatre. The play examines whether people get what they deserve in this life or whether it is merely down to luck, by focusing on the contrasting fortunes of one family – a father and his two sons, David and Amos.

David is the older brother and everything always goes his way. He marries his childhood sweetheart (when her father conveniently dies!), he acquires a lot of land through his marriage, and his car repair business is booming and goes from strength to strength. David has the Midas touch and everything he touches turns to gold.

However, this constant stream of good luck does not make David happy, quite the contrary. David contrasts his own good luck to the fortunes of those closest to him – his father, his younger brother Amos, and his friends. He worries he has everything, while everyone else has nothing. David feels life is treating him too kindly, at the expense of others, and he becomes anxious that one day he will be made to pay a heavy price for all his good luck.

Meanwhile Amos, David’s younger brother, has spent his whole life training to be a baseball player, coached by their father. Amos even practices his pitching throughout the Winter down in the basement (a fatal mistake as it turns out). A scout finally comes to watch him play but delivers the devastating news that, due to a mistake his father made in his training, Amos will never be good enough to play in the big leagues. Amos’s lifelong hopes, aspirations and dreams come crashing down. This is a huge burden for David to bear because although everything is working out for him, Amos is left with nothing – no dreams, no hope and no future.

Key themes in the play are how much a man is in control of his own destiny and whether a man makes his own luck. The different characters hold different opinions. Gus, a refugee, believes fate is not in the tea leaves or in the stars, and that man makes his own luck. Shory, by contrast, describes man as a “jellyfish”, who does not swim but is washed in and out, at the mercy of the tide, having no control over his fate. We see that both Gus and Shory’s views on fate are heavily influenced by their respective wartime experiences.

The play makes it clear that, for David, his good luck feels as much of a curse as a blessing. David does not believe he deserves his good fortune, and so he spends a large part of the play waiting for a catastrophe to happen (it never does), and dreading the price he will be called upon to pay for his good fortune some day soon.

This production has a very strong ensemble cast. It would be wrong to single out any one actor as they were all excellent. As a collective, they really made the story “live”. I understood and empathized with all of the characters, I was interested in their lives, and I was keen to see how the plot unfolded and learn what happened next!

I am pleased I have seen this play, and experienced this production, because it is an interesting and thought-provoking night out at the theatre. It made me consider whether man made his own fate and got his just deserts, or whether it was all down to luck, in which case – where was the Justice? These big themes are considered through the prism of one particular family. Highly recommended – especially if you enjoy the work of Arthur Miller but have not yet had the chance to see this particular play.

The Man Who Had All The Luck played at the King’s Head Theatre (Islington, London) until Sunday 27 September 2015.
Collapse