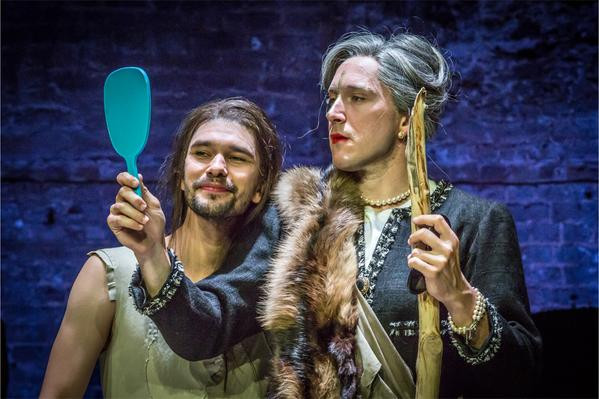 My EQView feature this week is a review of Bakkhai, the second play in the Almeida Greeks Season, a dark disturbing tragedy with a stellar cast – Bertie Carvel and Ben Whishaw.

Bakkhai by Euripides was the second play in the Almeida Greeks Season, following hot on the heels of Oresteia by Aeschylus. This was a new version of Bakkhai by Anne Carson featuring a stellar cast – Bertie Carvel and Ben Whishaw.

In contrast to Oresteia, which had an epic running time and multiple breaks, Bakkhai had a short running time of 1 hour 50 mins with no interval. The play galloped by, catching you, and holding you firmly in its grip.

The play opens with the young, charismatic and mischievous god, Dionysos, played by Ben Whishaw, coming to Thebes to work his magic and wreck havoc. The women of Thebes (the Chorus), seduced by the allure and charm of Dionysos, abandon their lives and homes, leaving Thebes to head off into the mountains to worship Dionysos. In causing this to happen, Dionysos has thrown down the gauntlet in a direct challenge to the authority of Pentheus, the King of Thebes, played by Bertie Carvel. Pentheus, for his part, has no respect for Dionysos, even questioning his divinity.

The Chorus was a group of women and I loved its diversity – the women making up the Chorus were all shapes and sizes, all ages, and all ethnicities. They expressed themselves through group singing and chanting, and the music sounded primal and supernatural, full of mystery and magic. It had a rhythm, a beat and, crucially, it had soul. Throughout the play, the Chorus moved and acted as one body, as one living organism. 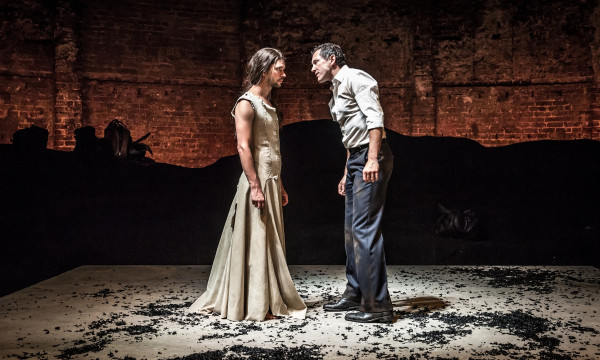 Pentheus refers to the women and their worship of Dionysos as “Bacchic nonsense” and he is scathing about what he sees as the toxic combination of women and wine. He sneers they are indulging in sexual acts but attempting to pass themselves off as a “prayer group”. And yet, despite his outright condemnation, Pentheus is intrigued and curious, and sees the allure of their revels. Pentheus wants to spy on the women and see for himself what they are getting up to in the mountains (especially because he suspects it involves drinking and sex!). Never has the phrase “Curiosity killed the Cat” been more apt than in this play.

Dionysos tempts Pentheus, saying that he can help him spy on the women. He lays a trap for Pentheus and reels him in. At first Pentheus is adamant that he will not dress as a woman as this would be demeaning. But, secretly, this is something that appeals to Pentheus like forbidden fruit and, as the idea takes hold in his mind, it becomes more and more attractive. He agrees to the disguise, all in the name of research!, and enters into the spirit. Ultimately, Pentheus takes great pride and joy in his cross-dressing, he is keen to know how good he looks, to ensure his hair and make-up are just right, and he revels in exploring his feminine side. Pentheus, dressed as a woman, makes quite an entrance and leaves a big impression.

However, this is a Greek tragedy and it all ends very badly for Pentheus. He is caught spying, he is set upon by the women, and his own mother, Agave, forms part of the mob who tear his body limb from limb (this action takes place off-stage). The play has a truly shocking and horrifying climax when Agave returns to Thebes to show off the lion she believes she has killed, only to have to face the dawning realization that her prize is not a lion but a human being, and she has killed her own son, born of her own flesh, and it is his head she is parading around in triumph. She is devastated. 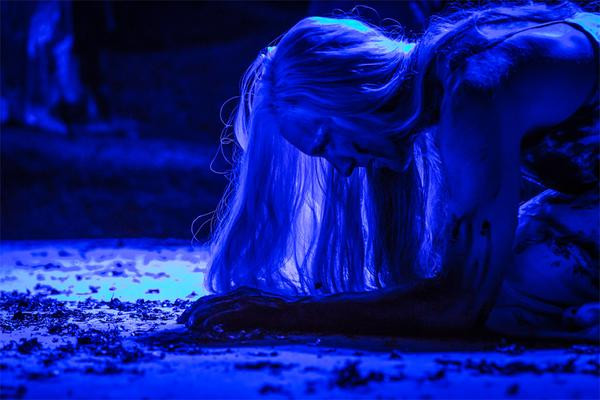 All the performances were strong in this production but I have to give a special mention to Bertie Carvel who was exceptional. Over the course of the play he is transformed from Pentheus, the incredibly strait-laced authoritarian, to a Pentheus who lets himself go and enjoys dressing as a woman, to Agave, Pentheus’s mother, a savage warrior queen with a bloodcurdling war cry. Carvel throws himself into the role of Agave and, as a result, is completely believable. The closing scene, where Agave realizes she has murdered her own son, was heart-breaking.

Another very strong production in the Almeida Greeks Season and one I would be happy to recommend. Worth seeing for an insight into how the play would have been staged in Ancient Greece (with three actors supported by a Chorus) and to see Bertie Carvel’s transformation over the course of the play as he plays across the gender divide. Dark, disturbing, and deeply unsettling – all reasons why this is a play worth experiencing.

Bakkhai played at the Almeida Theatre from 23 July until 19 September and was part of the Almeida Greeks Season.
Collapse