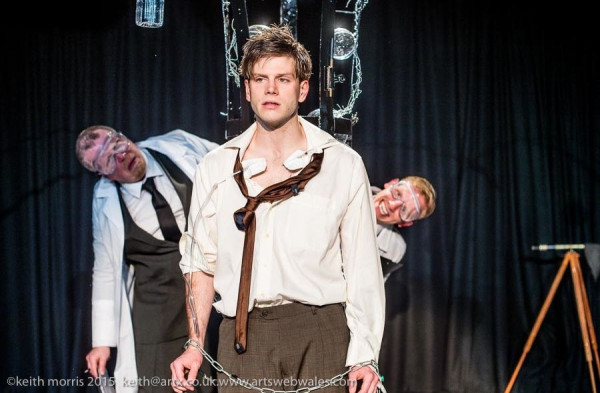 My EQView feature this week is a review of To Kill A Machine at the Edinburgh Festival Fringe. To Kill A Machine is a moving and powerful telling of Alan Turing’s life story, featuring a standout central performance from Gwydion Rhys.

TO KILL A MACHINE - REVIEW

To Kill A Machine at Zoo Venues is a new play by Catrin Fflur Huws which focuses on the life, the work and the extraordinary mind of Alan Turing.

To Kill A Machine has a short running time and covers Turing’s life story by focusing on key events – Turing’s time at Sherborne (his school) and at University, his important work at Bletchley Park, and his life after the War.

We meet Turing as a young boy, where he is perceived as “odd” both by himself and his family. They all recognize Turing is different from other boys his own age. This production highlighted how supportive, sympathetic and protective Turing’s family (his father, his mother and his brother) were of Turing and how they appreciated and valued his difference.

This play focuses on the questions that occupied Turing’s mind and which figured prominently in his work. A key question was whether machines could think. Turing believed machines could think but they differed from humans as machines would always follow the rules. The way humans thought and acted would always differ from machines, because humans were influenced by emotions and love, things a machine would never experience or feel.

The play was particularly strong on Turing’s life and downfall after the War, telling the story of his encounter with Arnold Murray, the robbery, and his prosecution for gross indecency. The reason for Turing’s undoing was his refusal to lie. He remained true to himself. This sealed his fate and he was to pay the ultimate price.

We see Turing undergo chemical castration which brings home how horrific and inhumane this process was. We also witness the longer-term effects of the chemical castration, which sabotaged Turing’s mind so he could no longer concentrate or think. “I want my mind back”, he says in despair.

The young ensemble cast was very strong, a small company (just 4 actors) playing a host of characters, but special credit has to go to Gwydion Rhys playing Turing. He conveyed Turing’s oddness, his intelligence, and his honesty and integrity in remaining true to himself. It was a standout performance.

The set was clever and I liked the central tree which dominated the stage and which had hanging off it key props integral to Turing’s story – a photo of Christopher, a tube of cyanide, and an apple. This ensured you had a constant reminder of Turing’s untimely death, overshadowing the whole piece.

The only issue I had with the play was that it framed Turing’s life story within a Game Show setting, “The Imitation Game”. I felt this framing was unnecessary and unhelpful. I could not see the point of setting the narrative within a Game Show context which was an unwelcome and annoying distraction.

A moving and powerful telling of Turing’s life story, focusing on his extraordinary mind and the very high price he paid for his honesty and being true to himself. A strong ensemble cast and a standout central performance from Gwydion Rhys as Turing. Highly recommended.

To Kill A Machine (by Scriptography Productions) played at Zoo Venues from 7 to 31 August 2015 as part of the Edinburgh Festival Fringe.
Collapse