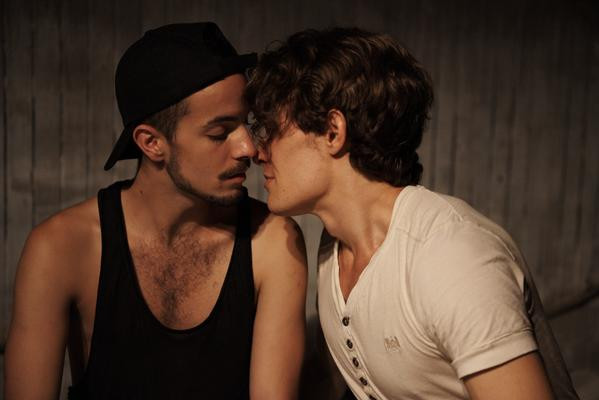 My EQView feature this week was a review of The Clinic by Patrick Cash at the King's Head Theatre. The Clinic was a play that bravely tackles all the hot topics of modern gay life and lifestyles - Grindr, chemsex, HIV, homophobia, mental health and love. Highly recommended. Go see!

The Clinic at the King’s Head Theatre takes an in-depth look at modern gay life and lifestyles. Its promotional poster highlights the hot topics of sex, chems, apps, HIV and love. The play addresses all of these complex issues in an engaging way by focusing on the lives and loves of two young gay Londoners, Ash and Elliot.

The first hot topic addressed is Grindr, and we look at the disparity between what some men are looking for (a relationship and love), and what is on offer (sex).

In the play, live acting is interspersed with short films shown on a screen, and one of the most effective uses of this multimedia is on the topic of Grindr. We see a Grindr interaction between Ash and Elliot on the screen. First we see what they want to say to eachother, the sort of conversation you would have if you were out on a first date. That sentence then gets deleted and what follows is what they think they are expected to say on Grindr. The sequence is very funny and shows how, even when people are looking to get to know eachother and make a real connection, what emerges is a shallow and superficial interaction. There is a huge disconnect between what men actually want to say and what they are prepared to commit to Grindr.

Ash and Elliot make it to a first date, and we follow them on their date and start to get to know them as people. They both have significant issues against which they are battling. Ash has a drugs habit that he can no longer control. He is on the Vauxhall party scene, engaging in chemsex and barebacking, and putting himself at risk. Elliot is HIV positive and is still coming to terms with his diagnosis and the associated stigma and discrimination.

Every story needs a good old fashioned villain, and in this play it is Jason. Jason is very wealthy and he uses his money to exert power over others, and has even bought a fiancé by showering him with expensive gifts. Jason is a predator, used to getting what he wants, and he doesn’t care who he destroys in the process. Ash becomes entangled in Jason’s web because he needs the money. Jason, although newly diagnosed with HIV, pays Ash for sex, plies him with drugs, and engages in chemsex and bareback sex, exposing Ash to HIV. Ash has to escape this self-destructive cycle before it is too late.

Elliot looks the way he does, and has the body he does, as a direct response to the homophobic bullying he experienced at school where he was called every name under the sun, including fag and poof. This had caused Elliot to feel ashamed and this was compounded by his HIV positive diagnosis. Over the course of the play, Elliot is able to face his fears and overcome them by returning to his old school, and giving a successful talk about being out and proud. He stops feeling worthless and starts to feel good about himself. 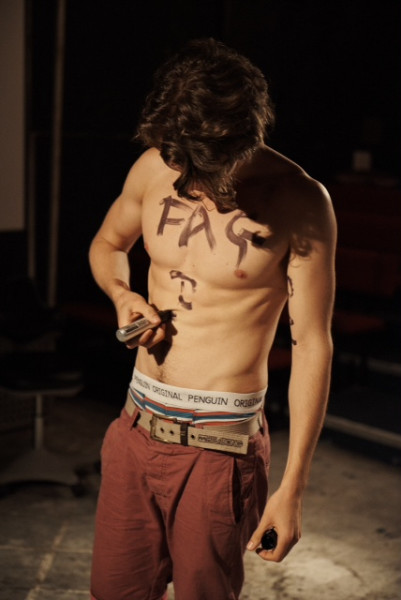 Ash and Elliot begin to fall in love, and start a relationship where they are there for eachother. Ash finds a way to be with Elliot when he gives his talk at his old school, and Elliot is there for Ash as he battles his drug addiction. Through watching them when they are together, it is clear their relationship is founded on intimacy and love, not sex.

Through getting to know Ash and Elliot as individuals, and following their stories, the play introduces us to, and addresses, many of the hot topics facing gay men today – Grindr, chemsex, mental health, HIV, homophobia and love.

As the play drew to a close, I was hopeful Ash and Elliot would have a relationship, which would enable each to overcome their own personal demons – in Ash’s case, his drugs habit and his mental health issues, and in Elliot’s case, the stigma and discrimination surrounding HIV. Being in a genuine, caring and supportive relationship, founded on honesty and love, would empower both individuals to emerge stronger. This was a positive and uplifting message.

This was an intelligent and insightful piece of writing, which covers issues in much more depth and complexity than you would expect from its short running time (80mins). The play bravely addresses most of the hot topics in modern gay life, does not shy away from controversy, and engages the brain. It positively provokes debate and discussion, and starts a conversation bound to continue after the curtain has come down. Highly recommended.

The Clinic is written by Patrick Cash and plays at the King’s Head Theatre (Islington, London) from 24 to 29 August 2015.

The Clinic will be playing an extra date at the King’s Head on Monday 7th September, 9.15pm. Tickets:
http://kingsheadtheatre.ticketsolve.com/shows/873537529/events