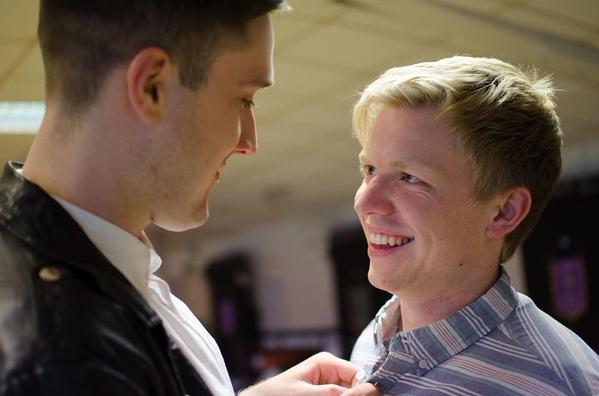 My EQView feature this week was a review of Positive at the Park Theatre. Positive follows the life and loves of Benji, a newly diagnosed HIV positive young gay man. It is a very powerful play, looking at what it means to be HIV positive, and exploring the prejudice, stigma and discrimination faced by HIV positive people today. But it is also an uplifting play with a positive message because it shows there is life after a HIV positive diagnosis, it is possible for HIV positive people to find love and have relationships and, ultimately, true love will triumph.

My EQView review of Positive at the Park Theatre is here:
http://eqview.com/2015/07/27/positive-review/

Positive is a new play, written by Shaun Kitchener, which follows the life and loves of Benji, a newly diagnosed HIV positive young gay man. It explores the impact of Benji’s HIV positive diagnosis on his life, and its effect on his friends and family.

The play opens when Benji has been living with his HIV positive diagnosis for about a year. We discover that since his diagnosis, Benji has withdrawn into himself, stopped going out, and he is definitely not dating. One of the underlying reasons for this, whether he admits it or not, is that Benji is apprehensive about disclosing his HIV status to new people, and he fears their reaction – what they will think and say. All in all, it is so much easier to stay in and reconnect with his passion for Britney Spears!

We enter Benji’s life just as he decides it is about time he stopped staying in and started going out again. He ventures out clubbing on his own and meets Olly – will this brief encounter end in a night of passion? And he reluctantly goes out on a date with Matt, set up by his flatmate Nikki and her boyfriend Greg – will this blind date lead to a meaningful relationship?

There are a couple of scenes in this play that spoke to me and moved me profoundly, and I will cover both scenes in some depth.

The first is Benji’s encounter with Olly. Benji has decided to go out clubbing on his own and he is at a club, hanging around outside. Benji meets Olly, a young student, who is obviously attracted to him. They exchange pleasantries, they flirt, one thing leads to another, and they end up back at Olly’s. Things get heated, sex is on the cards, and Benji suggests they use a condom.

Olly is insistent there is no need as he is “clean”. The use of that word sent a shiver down my spine. Benji, in order to explain why he wants to use a condom, ends up disclosing his HIV status, supposedly the right thing to do. Olly freaks out, calls Benji “disgusting” and “sick”, and is stressed out as he has kissed Benji and thinks he will get HIV and die of AIDS. Olly’s outright rejection of Benji is painful to watch and he has no regard for Benji’s courage and honesty in disclosing his HIV status. Benji quips that the fallout to his HIV disclosure is like “Christmas Day on Eastenders” which is an incredibly funny line, but this is a brutal scene to watch. Olly’s reaction is totally unjustified and should not be happening in this day and age.

The irony is that, whilst Benji is HIV positive, as he is on treatment and his viral load is undetectable, there is almost no chance of him passing the HIV virus on. And, whilst Olly insists he is clean, given he has been enjoying Fresher’s Week to the full, and as he has never had a HIV test, he has no way of knowing his status. There is a possibility that Olly is HIV positive, he just doesn’t know it as he has never been tested.

The second scene is when Benji’s mum, Margo, pays him a surprise visit at home and interrupts his date night with Matt. Margo loves her son, and accepts his sexuality, but it doesn’t take long for her deep-seated prejudices to come to the fore. Margo thinks Benji “decided to be gay” and she has a poor understanding of HIV, refusing to drink from the same glass as Benji, as she is frightened she will become infected. For Margo, HIV is something that should be kept hidden, a dark secret. These attitudes would be heartbreaking coming from anyone, but to have these views expressed by your Mum is very destructive. This scene highlighted the stigma faced by HIV positive people today, sometimes coming from their nearest and dearest, the people you would expect to support you, not to undermine you.

Ultimately this play is about the triumph of love over adversity. By the end of the play, Benji has a new boyfriend, Matt, who knows and accepts his HIV positive status, who does not see that as an issue, and who loves Benji for the person he is. The play shows there is life after a HIV positive diagnosis and it is possible for HIV positive people to find love. But the play also rightly highlights the prejudice faced by HIV positive people, and the stigma associated with the diagnosis, both of which need to be challenged in order for them to be overcome.

The play comes full circle and we end with where it all began – Benji’s HIV positive diagnosis. By revisiting the start of Benji’s HIV story, and being with him as he receives this devastating news, it enables us as an audience to reflect on what we thought a HIV positive diagnosis might mean, what it actually means, and how far Benji has come in the year since he got this news.

What I liked about this play was that it took what could be a very intimidating and frightening subject – a HIV positive diagnosis – and, by looking at the impact of this diagnosis on one particular person, Benji, and on his life, it made the topic accessible to a general audience. Humour is used continuously throughout the play and, by tackling a very serious subject in a relatively light-hearted way, the play is able to reach out to a wide range of people.

Timothy George, playing Benji, was excellent. He came across as a young man, who was popular, confident, lovable and funny, but whose HIV positive diagnosis had made him insecure and vulnerable. The play is Benji’s story, he is the central character in the play, and George is able to carry the play. Strong support was provided by Sally George (playing Margo, Benji’s mum), Shaun Kitchener (playing Matt, Benji’s boyfriend) and Ryan J Brown (playing Olly, Benji’s one night stand).

In summary, a very powerful play, looking at what it means to be HIV positive, and exploring the prejudice, stigma and discrimination faced by HIV positive people today. Positive is an uplifting play with a positive message because it shows there is life after a HIV positive diagnosis, it is possible for HIV positive people to find love and have relationships and, ultimately, true love will triumph.

Follow the link for more information on Positive and to book tickets:
https://www.parktheatre.co.uk/whats-on/positive
Collapse