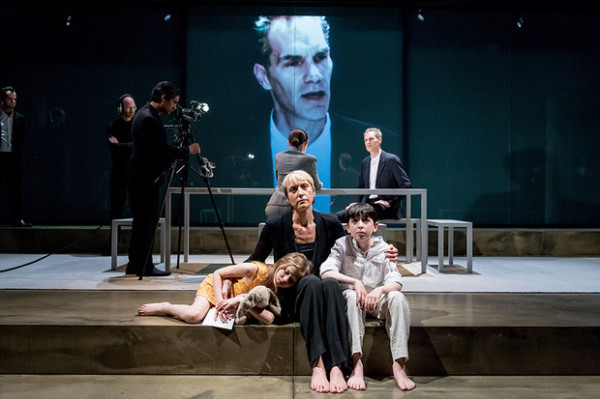 My EQView feature this week was a review of ‎Oresteia‬ at the Almeida Theatre. It was an amazing night out at the theatre, with a piece that is hard-hitting, modern, relevant, resonated strongly, and which made a lasting impact on me. 5 shining stars!

My EQView review of Oresteia at the Almeida Theatre is here:
http://eqview.com/2015/07/08/oresteia-review/

Last week I went to see Oresteia by Aeschylus, in a new version created by Robert Icke, at the Almeida and I genuinely had one of the most amazing theatre experiences I have ever had in my entire life. I am very thankful I got to experience this production, I cannot recommend it highly enough, and I have no hesitation in awarding it a maximum five stars.

I had not even intended to write a review of this production but, having experienced it, I had to put pen to paper to at least attempt to capture some of the magic that took place on stage.

I had no prior knowledge of Oresteia before seeing this production – all I knew was that it was a Greek tragedy. I have seen Greek plays and tragedies before but, overall, I would say that I am very ill-informed about, and have very little knowledge of, Greek theatre.

In the post show Q&A, the Director Robert Icke said his goal was to make his productions equally accessible to everyone – to first-time theatregoers, to those who have no knowledge of the play, and to informed theatregoers who know the play in depth. He succeeded in achieving this ambition. I had no prior knowledge of the play, but this new adaptation and interpretation gripped me right from the start, and did not loosen its hold on me until its conclusion. I had no trouble following the action of the play or understanding the dialogue and the meaning.

Oresteia is a piece which contains big ideas and themes, examined through private and public prisms, personal and political spheres, and we see the impact of words and actions on individuals, family, and wider society. Big moral dilemmas are posed, and the themes of revenge, retribution, justice and mercy are explored in depth.

Oresteia opens with a big moral question – is Agamemnon, the King, willing to sacrifice his beloved young daughter, Iphigenia, for the sake of his people and the greater public good? It is foretold that Iphigenia’s death will ensure Agamemnon wins the war, and the taking of one innocent life (Iphigenia’s) will save the lives of hundreds, and possibly thousands, of Agamemnon’s countrymen.

After much agonizing, Agamemnon agrees to sacrifice his daughter but this unleashes a bloody trail of murder and destruction that will plague his family down the generations for many years to come. This one act, the taking of his daughter Iphigenia’s life, will lead to his own murder at the hands of his wife, Klytemnestra, and then the murder of his wife Klytemnestra at the hands of his son, Orestes. Blood breeds blood.

We start with this one unjust act, the taking of Iphigenia’s life by Agamemnon in pursuit of the greater public good, and we then follow the repercussions of this act on Agamemnon’s family down the generations.

Oresteia culminates and climaxes in a trial scene, where Orestes, Agamemnon’s son, is on trial for murdering his mother Klytemnestra, an act he carried out in revenge for his mother murdering his father. We the audience are asked to decide whether Orestes is innocent or guilty, whether he is mad, whether his actions are justified, and what punishment he should suffer for his crime.

The play feels very relevant and contemporary – so much so, it could be a piece of new writing rather than something that was written over 2,000 years ago. The actors wear modern dress and the set is modern and minimalist. Everything feels very now. This has the effect of drawing the audience right into the heart of the play and its action, because the world on stage is very much our world.

The intervals and the breaks in the production are very strictly timed and there are digital clocks in the theatre and in the foyer area counting down the time, in seconds, to when the action resumes. This made the play feel as though it was taking place in real time, and it lent the production a real immediacy and urgency. It also created a buzz.

For me, the quality of a production can be measured by the quality of its actors, and I truly value a strong ensemble company, creating a special energy on stage on any given night, working together and feeding off eachother so each actor gives of their best. This was definitely the case with this ensemble and, on the night I saw the production, every actor delivered an exceptional performance. It was one of the strongest ensemble performances I have seen in a long time.

In summary, an amazing night out at the theatre, with a piece that is hard-hitting, modern, relevant, resonates strongly, and which made a lasting impact on me. Theatre at its best, reaching the parts others cannot reach. 5 shining stars!

Oresteia plays at the Almeida Theatre until 18 July 2015 and is part of the Almeida Greeks Season.