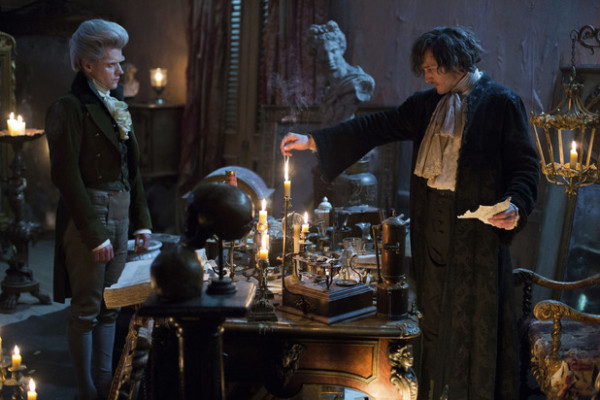 My EQView review of Episode 6 of Jonathan Strange and Mr Norrell is here:
http://eqview.com/2015/06/24/jonathan-strange-mr-norrell-episode-6-review/

BBC One’s lavish Sunday night period drama about English Magic and Magicians, Jonathan Strange & Mr Norrell, continued this week and could easily have been titled “Jonathan Strange goes mad in Venice”. Strange flees to Venice, in pursuit of madness and his beloved wife, Arabella, whom he is determined to bring back from the dead.

The penultimate episode begins with Jonathan Strange being declared a Fugitive in England, and his Book of Magic, with a dedication to his beloved wife, finally goes on sale to the public. Norrell, having failed to stop the publication of Strange’s book, resorts to magic and the books disappear as soon as they are purchased. By making the books vanish in this way, Norrell ensures Strange’s ideas about English magic do not see the light of day.

Meanwhile, Strange has fled to Venice, but he is a changed man. The death of his wife, Arabella, has left him a broken man. Strange, when Arabella was alive, was a confident young man, happy and content, looking every inch the true gentleman, finding his true vocation and path in life. Now in Venice, Strange has immersed himself in his experiments, driving himself on and on, not eating or sleeping properly, and appearing dishevelled, unkempt and mad.

Strange personally witnessed how King George’s madness enabled him to see into other worlds, and now, in a bid to find Arabella, Strange is chasing after madness himself. Strange’s aim is to conjure up a Fairy Servant and ask him to bring Arabella back from the dead. Strange realizes Fairies are wicked and dangerous but he knows he needs their help to bring Arabella back.

Through sheer determination and dogged persistence, Strange discovers a path through to the Lost Hope Ball, where he finds Stephen, Lady Pole and Arabella. Horrified, Strange realizes Arabella has been enchanted by the Gentleman and is doomed to dance forever at the Lost Hope Ball. Strange has journeyed to other lands, he has seen where Arabella and Lady Pole are held captive, and he has witnessed their enchantment. He is rewarded for his efforts by being cursed himself, encased within a spell of the Gentleman’s making, and unable to break free.

Back in England, Norrell continues to agitate against Strange to anyone willing to listen. Norrell claims Strange is playing with forces he does not understand, and dabbling in Black Magic which will bring catastrophe and disaster down upon England.

The episode ends with a truly stunning sequence. Strange says “Tell Norrell I am coming”, and hundreds of Black Ravens, last seen in Venice, break through Norrell’s mirror at home and into England. These Black Ravens may symbolize Strange’s return to England, but they are also a clear sign that Ancient Magic, the Magic of the Raven King, is returning to England after a long absence. Strange has succeeded in restoring the Magic of the Raven King to England but what has he unleashed, and are these forces for good or evil? Will Strange, Norrell and the other English Magicians be able to control this Magic, and will they use it for good or ill?

All will be revealed in the final episode next week and I, for one, cannot wait!

Jonathan Strange & Mr Norrell concludes next Sunday at 9pm on BBC One.
Collapse