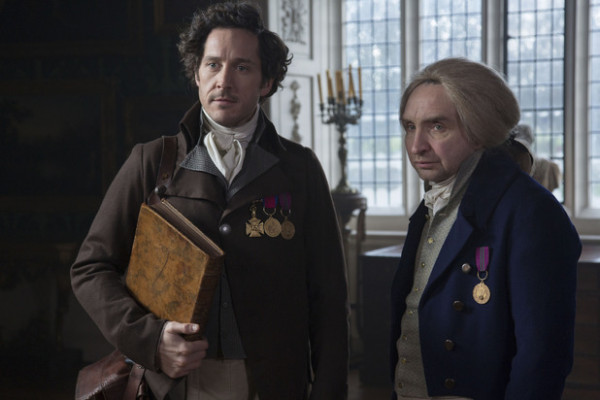 In EQView this week I reviewed Episode 4 of Jonathan Strange & Mr Norrell, which continued this week with an episode where the two Magicians, Strange and Norrell, start out as close colleagues but end as sworn enemies.

My EQView review of Episode 4 of Jonathan Strange and Mr Norrell is here:
http://eqview.com/2015/06/12/jonathan-strange-mr-norrell-episode-4-review/

BBC One’s lavish Sunday night period drama about magic, Jonathan Strange & Mr Norrell, continued this week with an episode where the two Magicians, Strange and Norrell, start out as close colleagues but end as sworn enemies.

At the end of Episode 3, Lady Pole attempted to assassinate Mr Norrell because of what he had done to her. Episode 4 opens with this fact being covered up and a story being put about that a French spy shot at Mr Norrell in revenge for his successful magical interventions in the War. Plans are quickly made to send Lady Pole to an asylum, where she will be out of harm’s way and unable to commit any further atrocities.

Their commission to cure the King brings into sharp focus Jonathan Strange and Mr Norrell’s differing approaches to the practice of English magic. Mr Norrell wants “Modern magic for the modern age”, whilst Jonathan Strange is keen to explore the Black Magic of the past and to follow the paths of the Raven King.

When Jonathan Strange returns to see King George III alone, the King helps Strange find a way back to the old World through mirrors, and Strange rediscovers the “King’s Roads”, the dark paths and highways of the Raven King. This is a strange, mysterious and magical world, and once Strange has found his way into this world, he is keen to return and explore it further despite the obvious dangers.

Jonathan Strange is drawn towards the ancient ways of the Raven King and the practice of Black Magic, at the same time as Mr Norrell and Lascelles are working away on a book setting out “Norrellite Magic for the Modern Age”, the only form of magic they deem acceptable and respectable.

Jonathan Strange profoundly disagrees with the ideas expressed in the Lascelles book and he reviews the book, denouncing its contents and the magic it advocates. Strange realizes he will have to break free from Mr Norrell, branch out on his own, and follow his own path. Only then can he explore the Black Magic he wants to practice, the medieval magic of the Raven King. For Strange, this ancient magic is truly wonderful and belongs to a Golden Age of English Magic. Compared to this, Mr Norrell’s modern magic appears dull, mundane and commonplace.

With Jonathan Strange denouncing Mr Norell’s book in print and in public, their collaboration and partnership is at an end. Mr Norrell will pursue the practice of modern magic and Jonathan Strange will attempt to follow the paths of the Raven King and rediscover medieval magic.

Throughout this episode, we get a firm sense of the deep love between Jonathan and Arabella Strange. They are a very modern couple and their marriage is a meeting of hearts and minds. Towards the end of the Episode, Jonathan Strange is willing to give up being a Practical Magician, and return to being a Theoretical Magician, so he can spend more quality time with his wife.

But we all know what happens to the best laid plans! Just as Jonathan and Arabella resolve to focus on their marriage, Strange receives a summons. Napoleon has returned to France and captured Paris. Strange is the Army’s Magician and his services are urgently required. So much for Strange enjoying a quiet life of domesticity!

In this Episode, it becomes clear the two Magicians have diametrically opposed views on the direction English Magic should take. Jonathan Strange and Mr Norrell split and go their separate ways – Mr Norrell to practice “Modern Magic for the Modern Age”, and Jonathan Strange to try and rediscover Medieval Magic, the Black Magic of the Raven King. As the Episode closes, we focus in on Mr Norrell, who now sees Jonathan Strange as his sworn enemy. The battle lines are drawn and there can only be one winner. Let battle commence!