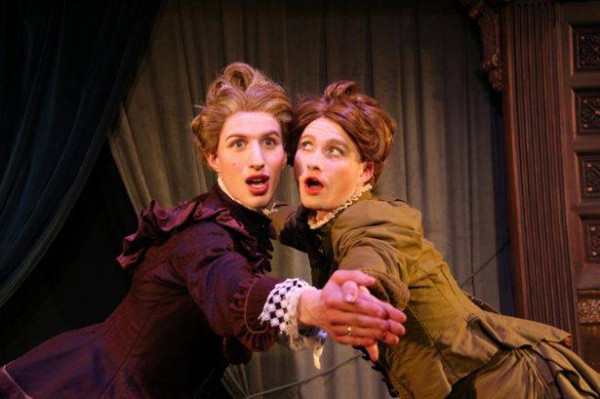 My EQView feature this week is a review of Fanny & Stella, currently playing at the Above The Stag Theatre in Vauxhall. Fanny & Stella tells the true story of Victorian cross dressers Frederick (Fanny) Park and Ernest (Stella) Boulton, two young men who dared to be different, whatever the cost. A very enjoyable and fun night out. Go and see Fanny & Stella – you will be entertained and educated, and I guarantee you will have the time of your life!

Fanny & Stella: The Shocking True Story is a new play with songs, currently playing at Above The Stag Theatre, which tells the true story of Victorian cross dressers Frederick Park (Fanny) and Ernest Boulton (Stella), two young men who dared to be different, whatever the cost.

The way the story is presented is very effective, as it empowers Fanny (Frederick) and Stella (Ernest) to tell their own stories. When you sit down in your seat, you are transported to a Victorian Working Men’s Club where, for one night only, Fanny and Stella are going to inform and entertain you by bringing their real life stories onto the stage. They tell their stories warts and all – their rise to fame and their fall from grace. You know right from the off that you are embarking on a fabulous adventure and that you are in for one hell of a ride!

Frederick Park (Fanny) and Ernest Boulton (Stella) were two young Victorian men who dared to be different. Known to their friends as Fanny and Stella, and to the tabloids as the “He-She Ladies”, they loved to dress as women. They performed on stage as female impersonators, and went out on the town, to theatre and social engagements, still dressed as women, hoping to pick men up for sex. They were much admired and Stella in particular had many suitors, including Lord Arthur Clinton.

Fanny and Stella were real people and I appreciated, valued and respected the way in which the play covered all aspects of their lives – their parents, their families, their friends, their suitors, their love lives, money, jobs, and their ambitions and aspirations. This was an in-depth and rich exploration of Fanny and Stella’s multi-faceted lives.

The songs are a real riot – incredibly clever and very funny. They move the story along at a rapid pace, enable the audience to join in and participate, ensure the show is a lot of fun, and give the production that elusive X factor. Songs include “Sodomy on the Strand”, “Those Funny He/She Ladies”, “Has anyone seen my Fanny?” and “My Mother”, and they are all so catchy I guarantee you will be singing them in the interval and as you leave the show!

All the actors in the production are excellent but special mention has to go to Marc Gee Finch (Fanny) and Robert Jeffery (Stella) who make convincing women and work very well together as a double act. They convey how colourful and charismatic Fanny and Stella were as characters and as women, and they also tug at your heartstrings when you think about how sad it is that Fanny and Stella had to suffer so much just for wanting to be themselves.

For a fringe production, the costumes and the set are a real treat and an absolute delight. Fanny and Stella’s dresses are to die for and Marc Gee Finch (playing Fanny) and Robert Jeffery (playing Stella) wear them with real style and aplomb. The staging and set is excellent too, and I especially loved the use of the closets to reveal surprise characters and interiors. Walking out of the closet, and leaving it behind, at the end of the piece was a stroke of pure genius!

All in all, a very enjoyable and fun night out, where you will also learn a lot about hidden LGBT history, and appreciate just how much progress has been made on LGBT rights in a relatively short space of time. Go and see Fanny & Stella – you will be entertained and educated, and I guarantee you will have the time of your life!

Fanny & Stella: The Shocking True Story plays at Above The Stag Theatre until Sunday 14 June.

Above The Stag Theatre is the UK’s only full time professional LGBT theatre.

My interview on Fanny & Stella with the playwright Glenn Chandler can be found here:
http://eqview.com/2015/05/29/fanny-stella-glenn-chandler/
Collapse