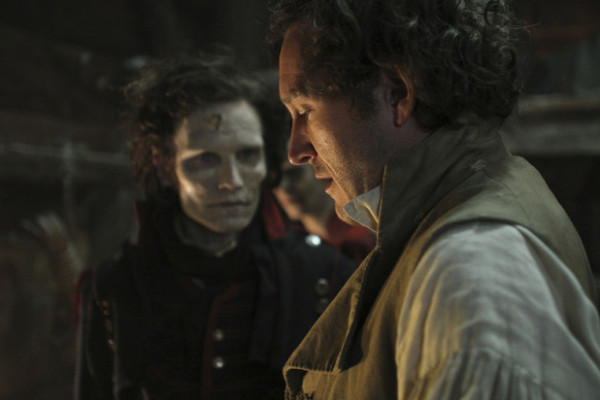 In EQView this week I reviewed Episode 3 of Jonathan Strange & Mr Norrell, which continued this week with an excellent episode, much darker in tone, with viewers led to believe the Dark Arts and Black magic are in the ascendant.

My EQView review of Episode 3 of Jonathan Strange and Mr Norrell is here:
http://eqview.com/2015/06/03/jonathan-strange-mr-norrell-episode-3-review/

At the start of Episode 3, London society has noted Lady Pole’s “strangeness” and gossip is rife about why she remains aloof from society, shuts herself away and about the state of her mind. Arabella, Jonathan Strange’s wife, is one of the few people permitted to visit Lady Pole and she becomes a close friend and confidante.

Lady Pole is unable to tell Arabella what has happened to her (she ends up talking gibberish), and so she tries to explain through embroidery, stitching a tapestry depicting herself, the Gentleman, Stephen and the ghostly Last Hope Ball. Lady Pole is distraught when her elaborate embroidery work is destroyed overnight.

Whilst Arabella is trying to unravel Lady Pole’s dark secrets in London, her husband, Jonathan, has journeyed out to the War in search of Wellington. At first, Wellington does not have much time for the magician sent out to help him, but when Jonathan starts working his magic, Wellington sees his potential, nicknames him “Merlin”, and starts asking for very specific pieces of magic.

Jonathan enjoys the War to begin with, especially practical tasks like making a road. But misfortune strikes, Jonathan loses his closest servant and all the books Mr Norrell lent him in one horrific explosion, and all he has left to guide him is one book, “The History of the Raven King”. This is the only magic book he owned, given to him by Arabella.

Using the Raven King book, Jonathan practices Black magic in the later stages of the War, bringing dead soldiers back to life. These near zombies, his own creation, disturb Jonathan greatly. He knows this magic is dark and dangerous, not the “respectable” magic Mr Norrell tried to teach him, and he is unable to control it.

Arabella is the constant in this episode, unifying the diverse characters and the multiple storylines. She is Lady Pole’s closest friend and confidante. She is Jonathan’s wife, and Mr Norrell intercepts the letters between Jonathan and Arabella, so he knows what is happening to Lady Pole and what is going on in the War. Finally, the mysterious Gentleman is strongly drawn to Arabella and desires her for his own.

This episode ends on a cliffhanger when a deranged Lady Pole, driven almost out of her mind, fatally shoots one of the main characters (I won’t say who!). Is this character really dead or can magic, whether black or white, come to the rescue and bring him back from the dead? If he is restored to life, what penalty will have to be paid this time around?

An excellent episode, much darker in tone, with viewers led to believe the Dark Arts and Black magic are in the ascendant. Jonathan resorts to the Black magic of the Raven King to help win the War, Lady Pole and Stephen are under the evil Gentleman’s power, and Arabella is in real danger of being drawn into the Gentleman’s dark web against her will.