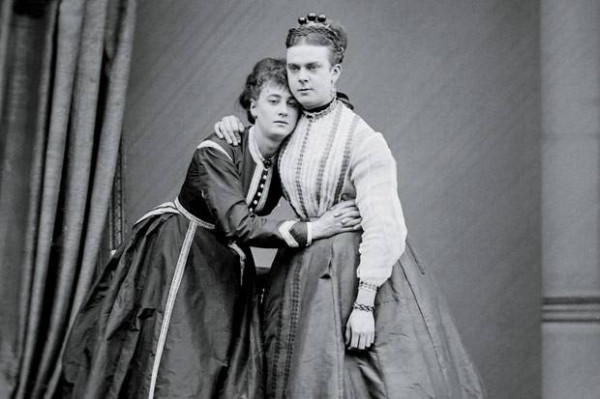 My EQView feature this week is an interview with Glenn Chandler, the playwright of Fanny & Stella, currently playing at the Above the Stag theatre in Vauxhall. Fanny & Stella tells the true story of Victorian cross dressers Frederick Park and Ernest Boulton, two young men who dared to be different, whatever the cost.

Fanny & Stella: The Shocking True Story is a new play, currently playing at the Above the Stag theatre in Vauxhall, telling the true story of Victorian cross dressers Frederick Park and Ernest Boulton (Fanny and Stella), two young men who dared to be different, whatever the cost.

I saw the play with songs recently and I thought the writing, the songs, and the acting were exceptional (review to follow). It made me want to find out more about the play and so I interviewed Glenn Chandler, the playwright, to find out how and why he came to write the play.

EQView: What is special about the theatre and why do you love writing for the stage?

Because it’s different every night. A television film or a movie remains the same every time you look at it. A theatre piece is something which is constantly evolving. And besides, I like being hands-on, writing for and working with actors.

It is London’s only LGBT theatre and hats off to Peter Bull who started it. Gay themed plays will always have a home.

When did you first come across the case of Fanny and Stella?

While I was producing Cleveland Street The Musical, which I also wrote, at the old Above The Stag. One of the rent boys at the Cleveland Street brothel had mixed with Boulton and Park and put his name to a pornographic memoir in which he described their relationship. I began researching them for a book initially – but then thought theatre was the place for them!

What research did you do into Fanny and Stella’s story and into the Victorian period during which the play is set?

I read the whole trial at the National Archives in Kew, and spent many hours at the British Library in Colindale (now closed) reading accounts of the magistrates’ procedings. The papers reported their lives and activities in enormous detail. I was stunned to discover that Park had a brother who had been arrested for fondling a policeman! It obviously ran in the family.

What drew you to Fanny and Stella’s story? Why did you want to put it on the stage now?

I think now is absolutely right. LGBT issues are prominent – and by luck we coincided with the referendum on gay marriage in Ireland. I wonder what Boulton and Park would have thought of that!

The subtitle for the play is “The Shocking True Story”. What do you think is “shocking” about Fanny and Stella’s story?

It was shocking at the time, to the Victorians. Not to us. Sodomy was something they didn’t like to discuss, and the details of such cases the newspapers deemed unfit to print.

Why did you decide to tell Fanny and Stella’s story as a “play with songs” rather than as straight drama?

Straight drama demands that you have to get serious and make “dramatic points” and it all has to mean something. With songs, you can get serious, make dramatic points and mean something, but at the same time tell the story in a much more light-hearted and fun way. Besides, Fanny and Stella were theatrical and sang in public – they would not have dreamt of a show about them without songs. I’m pretty sure anyway.

How did you find the right person to compose the music and write the songs? Did you input into that process?

Steven Dexter the director introduced me to Charles Miller the composer. I hadn’t worked with either before. It worked amazingly well. One song ‘Sodomy on the Strand’ I wrote the lyrics before breakfast, emailed them to Charles, and by lunch he had set it and sent it to me as an MP3 file. I’m sure it doesn’t always happen that way! I think his music is superb and very, very memorable, judging by the audience members I hear humming it in the bar afterwards.

Fanny & Stella was one of the rehearsed readings that Above The Stag staged last year. Did you make any major changes following the reading?

I made a few changes, as one does, but the shape of it remained the same. Some people at the reading asked why I didn’t just tell the story of them straight through, ending in their demise. I wanted to tackle how they must have felt after their acquittal, and show them telling their own story.

How did you find the right actors to play Fanny and Stella? Were there any qualities in particular you were looking for?

They had to be good actors, be able to sing well, and look good dressed as women! It wasn’t easy. But Robert Jeffrey and Marc Gee-Finch, who had never met before, are now a double act who could perform on any stage!

Why do you think Fanny and Stella’s story is relevant to a modern-day audience?

Because we need to be reminded of where we came from, and what it was like in the past. I was never taught gay history at school. We should all be taught it now. Fanny and Stella teaches it in a light-hearted, fun way. What better way to learn history?

What audience responses have you got so far to Fanny & Stella?

Audience reactions have been brilliant. Not heard a bad word yet. And believe me, that’s rare!

What next for Glenn Chandler?

Not saying! A couple of projects I’m working on, one which stems indirectly from Fanny and Stella, but I’m keeping mum about them at the moment. Sorry!

Fanny & Stella: The Shocking True Story plays at the Above the Stag theatre in Vauxhall until Sunday 14 June.
Collapse