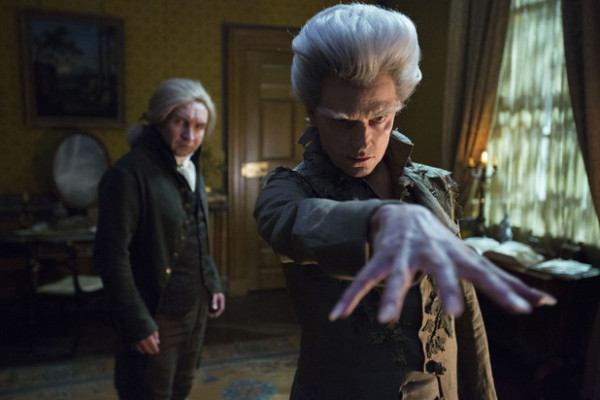 In EQView this week I reviewed Episode 2 of Jonathan Strange & Mr Norrell and found it drew me further into its tangled web of magic and mystery.

My EQView review of Episode 2 of Jonathan Strange and Mr Norrell is here:
http://eqview.com/2015/05/28/jonathan-strange-mr-norrell-episode-2-review/

Episode 2 opens with Mr Norrell at the height of his powers, fully involved in England’s War effort. The French are completely fooled by his latest pièce de résistance – a seemingly endless fleet of ships made from rain. Back in England, Mr Norrell is showered with praise and enjoys basking in his new found fame.

But evil forces are at play, and the bargain Mr Norrell made with the Gentleman at the end of the opening episode, to restore Lady Pole to life, returns to haunt him. Lady Pole is alive but she is not at peace, and her illness gets progressively worse throughout the episode. When she tries to explain what has happened to her, she ends up speaking gibberish, and neither doctors nor magicians can help her. Sir Walter summons Mr Norrell, but all he can say is there is nothing he can do as Lady Pole has gone mad.

The Gentleman claimed half of Lady’s Pole life for helping Mr Norrell bring her back from the dead. Every night, as Lady Pole sleeps, she is doomed to dance the night away with the Gentleman at his ghostly Last Hope Ball. Lady Pole sees this as a fate worse than death, saying she was “better dead than as I am”.

The most important event in this episode is that Jonathan Strange and Mr Norrell finally meet. Strange’s instinctive magical powers make him Mr Norrell’s equal, because although Strange has never formally studied magic, he is able to practice effective magic. Mr Norrell, having witnessed the magic Strange can perform, agrees to take him on as an apprentice and promptly develops a 10 year study plan for him! To Strange’s profound disappointment, The Raven King and Fairy Magic are not on the curriculum.

Although the Magicians start out as friends, it is inevitable they will become rivals. Sir Walter consults Strange when Mr Norrell is away, and when Mr Norrell is too indisposed to help with a ship that has run aground, Strange springs into action, conjuring up sand horses in one of the most breathtaking special effects sequences I have seen on British TV in a long time. Strange’s magic and his can do approach impresses everyone.

The English politicians are keen to send Strange abroad to the battlefields where he can be of most help. Although initially very reluctant, Mr Norrell changes his mind when he sees this as a means to get Strange out of the way. Strange, like an eager puppy, bounds off to War, anticipating excitement and adventure. Strange would much rather be out on the battlefields with the Army, actively putting his magic to the test, than poring over magic books in Mr Norrell’s library, restricted to only studying those aspects of magic Mr Norrell deems appropriate.

The Gentleman returns towards the end of the episode and makes his presence felt. He is particularly drawn towards the youth and beauty of Arabella Strange. The audience are left pondering the questions – who is the Gentleman, what does he represent, what is he after, and how many more people will he drag down into the depths?

A thrilling episode, which developed key characters, moved the story on, was packed with action and adventure (and mind-blowing special effects), and introduced us to the Gentleman’s dark world. I can’t wait for next week’s installment when I’m hoping we will find out more about the mysterious Gentleman. Let the magic continue!