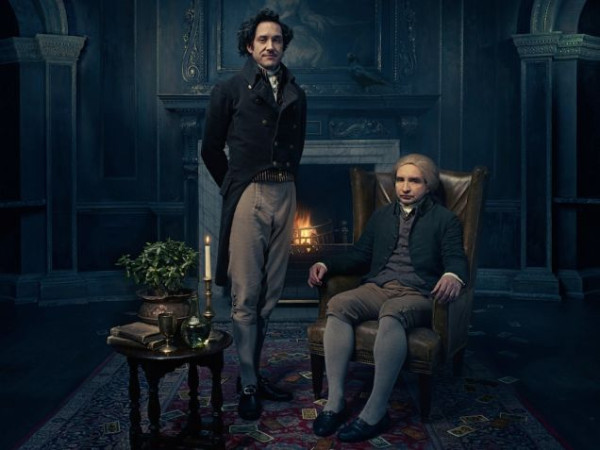 My EQView feature this week was a review of Jonathan Strange & Mr Norrell, the BBC’s new lavish period drama. It was a wonderful box of delights - pure magic!

My EQView review of Jonathan Strange and Mr Norrell is here:
http://eqview.com/2015/05/18/jonathan-strange-mr-norrell-review/

On Sunday night BBC One unveiled their new period drama, Jonathan Strange & Mr Norrell, a lavish 7 part adaptation of Susanna Clarke’s 2004 award winning first novel. And what a box of delights it was!

The intertwining stories of Jonathan Strange and Mr Norrell take place in 19th century England and, right from the opening sequences, this adaptation draws you into that familiar yet strange and mysterious world. This is a period drama with a difference – it revolves not around money, marriage and manners, but around magic. This focus on magic makes it both unique and very special.

The story opens with Mr Segundus visiting the prestigious Society of Magicians in York to enquire “Why is magic no longer done in England?”. Segundus wants to know why magic is now only found in the pages of books, rather than being practiced out in the streets and on the battlefields. The answer he receives is that the role of these gentleman magicians is to study magic not to perform it – they are theoretical magicians not practical ones!

Not content with this answer, Segundus sets out in search of the two English magicians he has heard about and tracks down Norrell, who has been busy buying up and hoarding all the books on magic and is proud to call himself a practical magician. When Segundus returns to tell the Society of Magicians in York about Norrell, they challenge Norrell to prove his magic, which he is able to do by making the statues in York Cathedral come to life. After proving his magical abilities and credentials in York, Norrell decides to go to London to offer his services to help England’s War effort.

There are a few delightful scenes which follow, where we see the quiet, reclusive and introverted Norrell, a Yorkshireman, arriving in London and having to break into London society. London society is shown to be very superficial and shallow, and its worst attributes are represented by the duo of Drawlight and Lascelles, who decide they will take it upon themselves to introduce Norrell to London society’s movers and shakers. The London scene is one long social swirl and all poor Norrell wants to do is to retire home and immerse himself in his magic books!

We are also introduced to Jonathan Strange in the opening episode, who is to be the second practical magician in England. Strange, when we first meet him, is a man who is in search of an occupation and a purpose. His intended bride, Arabella, is adamant he must make himself useful before he proposes. Luckily for Strange, his father dies at this very opportune moment, making him an estate owner and a landowner overnight, a firm foundation on which to build. Also, fortuitously for him, Vinculus, a street magician from London finds him, and foretells that he is going to be a magician. Maybe Strange’s vocation has found him rather than the other way round!

Initially Norrell’s offers to help with England’s War effort are met with cynicism by Sir Walter Pole, who fails to see how a magician can be of any help. However, Sir Walter experiences a deep personal tragedy when his fiancée dies a few days before they are due to be married. Norrell comes to the rescue but to bring the bride-to-be back to life he has to accept the help of the Gentleman, and promises him half of her life to come. Chillingly, to seal the deal, the Gentleman takes half of the lady’s little finger as surety. Sir Walter is overjoyed at the return of his bride-to-be, but what terrible price will she have to pay, and will the cost be too much to bear? Norrell runs off, depressed and unhappy with the deal he made.

In summary, this TV adaptation lived up to, and far exceeded, my expectations. It conjured up a mysterious England, a place where magic thrives. All the actors were excellent, bringing their characters to life, and perfectly translating them from page to screen. Special effects were used sparingly but, when employed, had maximum impact and were magical. And the opening episode ended on a real cliffhanger because you were left wondering what terrible price Lady Pole would have to pay in the future for the deal Norrell made with the Gentleman. The audience does not know who the Gentleman is, or what he represents, but he bore a strong resemblance to the Devil and was certainly from the dark side!

An excellent opening episode. I cannot wait to see how the story unfolds next week and what further mystery and magic lies in store. If you missed it on Sunday, catch up with it now before the second episode screens. If you don’t, you will be missing out on a treat!