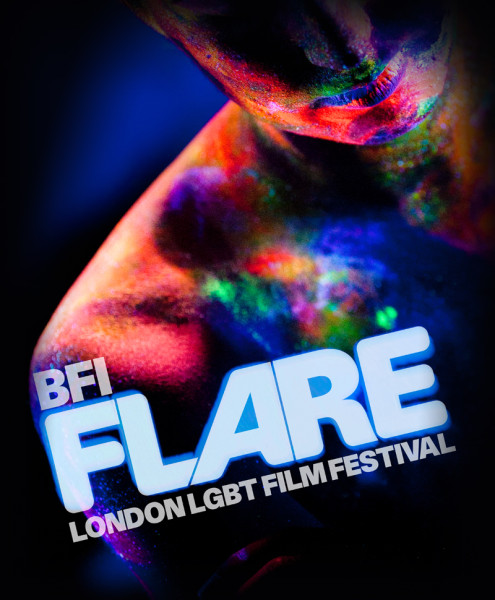 This is my EQView Preview of BFI Flare, Britain’s longest running and most popular LGBT film festival.

BFI Flare runs from 19 to 29 March in London and presents the best in queer cinema from around the world. I have being going for many years, I am very excited about this year's programme, and I genuinely think there is something for everyone > Enjoy!

This week I am previewing BFI Flare, the 29th edition of Britain’s longest running and most popular LGBT film festival. BFI Flare runs from 19 to 29 March in London and presents the best in queer cinema from around the world.

I have been going to the BFI London Lesbian and Gay Film Festival (as was) for the past few years and it introduced me to the range, depth and sheer diversity of LGBT cinema from around the world. BFI Flare gives me an opportunity to see a wide range of LGBT films that I would not normally get the chance to see.

– Bodies – Stories of sex, identity and transformation; and

It is very difficult to choose a few films to showcase from such a wide-ranging and diverse programme but I have chosen to focus on the Opening and Closing Night Gala films and films I have booked to see. This makes for a very personal selection.

The Opening Night Gala is I Am Michael, a provocative film which tells the true story of Michael Glatze, a pioneering gay rights activist who shocked the community by denouncing his homosexuality and embarking on a new life as a Christian pastor.

A former San Francisco based writer and journalist, Glatze founded his own trailblazing publication ‘Young Gay America’ in 2004, offering support and giving voice to queer youth. Following years of dedication to the cause, he underwent a crisis of identity, finding himself drawn to religion and a more conservative outlook on life. In 2007, he left not just the magazine, but also his boyfriend of 10 years, to start all over again. The films stars James Franco in the title role.

The Closing Night Gala is Out to Win, an inspirational documentary charting the history of homosexuality in competitive sport, with interviewees including Martina Navratilova, Billie Jean King, John Amaechi and Jason Collins.

In the competitive world of professional sports, homosexuality continues to be a big issue. With so many athletes afraid that coming out will mark the end of their careers, there is a dearth of proud LGBT sportspeople representing the community and empowering future generations. Thankfully, some brave individuals have spoken out about their sexuality and paved the way for change. Told through the words of these pioneers, Malcolm Ingram’s inspirational documentary charts the history of homosexuality in sport, highlighting the triumphs, and indeed the tragedies, of those fearless forerunners, and profiling the victories of present day stars.

I have booked to see six films as part of BFI Flare, all of which I am very excited about seeing. I am showcasing them to give EQView readers a flavour of the richness and diversity, the depth and breadth, of the films on offer.

The Falling is set in 1969 and is about a mysterious fainting sickness that overtakes an English girls’ school. Lydia and Abbie are best friends, existing largely in a universe of two. Abbie has a natural charisma and magnetism that enthrals Lydia and her peers. When Lydia’s older brother and Abbie sleep together, her fragile world starts to unravel. Then tragedy strikes and a mysterious delirium overtakes the school.

Tab Hunter Confidential is a moving documentary about the one-time matinee idol with a secret. With his chiselled good looks and beautiful physique, it’s not surprising that when Tab Hunter went knocking on Hollywood’s door in the early 1950s the studios welcomed him with open arms, making him an overnight sensation. But Hunter was a star with a secret, one he knew would ruin his career if it was ever made public and that he felt unable to talk about until now. The director coaxes a remarkable testimony from the once-closeted Hunter, tracing what life was like inside the Hollywood machine for a gay actor.

Something Must Break is a striking coming-of-age tale about a young trans teen living in Stockholm. Sebastian is a shy trans teen whose world is rocked by the arrival of an alluring young man named Andreas. Initially captivated by Sebastian’s non-traditional outlook, as the relationship between the pair develops Andreas soon begins to feel threatened by it, and the sense of impending tragedy is never far away.

Tiger Orange contrasts big city morality and sex culture with small town values in a sweet tale of two gay brothers from rural California. An absent mother and a harsh father don’t make for the happiest beginnings and Todd is the brother who left town, while Chet stayed, looked after his father, and ran the family hardware store. When Todd’s promiscuous LA lifestyle falls apart and he is forced to return home, the story properly begins. Chet’s shy refusal to engage with a gay lifestyle is thrown into high relief by Todd’s very modern engagement with online sex, outdoor cruising and full-on misbehaving. The clash of cultures forces both of them to re-examine who they are in a tale of small-town regret and brotherly misunderstanding.

Jamie Marks Is Dead is an unconventional horror film focusing on adolescent loneliness and isolation, and exploring adolescent awakening and sexual identity. When the lifeless body of a young outcast named Jamie Marks is discovered naked and abandoned by a local river, sensitive jock Adam becomes fascinated by the sad demise of the high school pariah. As Adam forges a tentative relationship with Gracie, the girl who discovered Jamie’s body, he finds himself haunted by spectral visions of his former classmate, and soon begins to realise that Jamie has some unfinished business and needs Adam’s help to find peace in the afterlife.

The Last One: Unfolding the AIDS Memorial Quilt, is a moving documentary following the AIDS memorial quilt as it tours the US in a mission to change social perceptions of the disease. The brainchild of AIDS activist Cleve Jones, the AIDS memorial quilt is the largest piece of folk art in the world. It commemorates the thousands of victims of the disease in segments the same size as a standard grave. Yet in each of these segments is the proof that love, admiration and a determination to fight stereotypes were present in the worst years of the epidemic.

Finally, there are a number of events taking place as part of BFI Flare, including talks and club nights, and I wanted to highlight one in particular. On Saturday 28 March, LAGNA presents Chris Birch and Mike Jackson talking about the film Pride. Chris Birch was a friend of the activists featured in Pride, and Mike Jackson was the co-founder of Lesbians and Gays Support the Miners. They will talk about the importance of the film and the lives of the people who inspired it. This is a free event but tickets have to be booked in advance.

If you are based in and around London, I would recommend you sample BFI Flare this year. There is something for everyone!

Public booking for BFI Flare is open and the Festival itself opens TOMORROW!

BFI Flare Website where you can explore the programme in full and book tickets:
http://www.bfi.org.uk/flare
Collapse