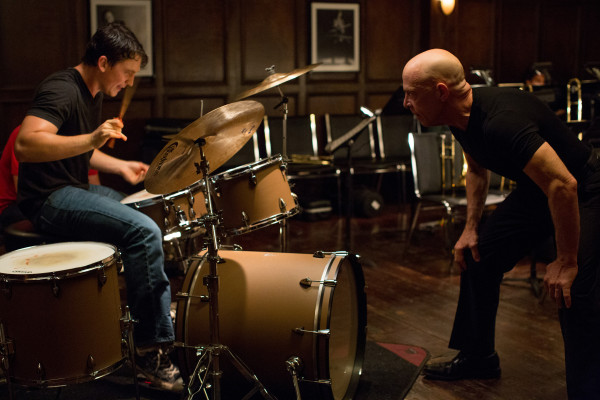 My EQView feature this week is a review of the film Whiplash. It is an intense rollercoaster ride!

Whiplash is an independent film with a small budget, no star names and a new Director, which is taking the film world – critics and audiences – by storm.

On the surface, Whiplash is a film about jazz drumming and what it takes to become a “great” jazz drummer. As such it would only appeal to a very niche audience. Why Whiplash has had such universal appeal, and why it speaks to so many people, is because the themes explored in the film are ones everyone can relate to.

Whiplash is written and directed by newcomer Damien Chazelle and is partly based on his own personal high school experiences with a tough music teacher.

The film focuses on Andrew Neiman (Miles Teller), a student at the prestigious Shaffer music school, a young jazz drummer, aiming high and aspiring to be one of the greats. The film puts us in Neiman’s shoes and we see the story unfold through Neiman’s eyes.

Whiplash is the story of what happens when Neiman, the promising music student, encounters and gets drawn into the world of Terence Fletcher (J.K. Simmons), the charismatic and terrifying conductor of Shaffer’s band. It is their relationship, Neiman and Fletcher, Student and Teacher, Mentee and Mentor, that is the dark pulsing heart of this film.

The film opens with Neiman being talent spotted by Fletcher in a rehearsal room and being invited to join the in-house band. This is what Neiman and every other student at the music school has been waiting for, a golden ticket, the opportunity of a lifetime. Ironically this dream come true scenario has the potential to become the nightmare from hell.

We then follow Neiman’s journey, from being the rookie in the band, to experiencing Fletcher’s barbaric teaching methods first hand, and through the constant struggle to secure and retain a regular spot in the band as a core member. This is by no means a linear progression, there are many ups and downs, and twists and turns along the way.

The themes explored and examined in this film are universal ones which everyone can relate to. What happens, and how does it feel, when your family does not value your talents and your chosen career? What personal sacrifices are you prepared to make in pursuit of success? Does practice make perfect? What happens if you push yourself too hard, beyond your limits? Will success make you happy? In terms of Fletcher, when does striving for excellence become bullying and exploitation? When does a Man become a Monster? And do the ends ever justify the means?

The relationship between Neiman and Fletcher, which lies at the heart of the film, is a complex one. Whilst Fletcher has all the power, and holds all the cards, at the start of the film, the power dynamics change over the course of the film, and this makes for an interesting battle of wills. Both Neiman and Fletcher are driven individuals, very focused on their goals, and neither will stop at anything to get what he wants. Fletcher has every intention of pushing Neiman to his absolute limits, as he firmly believes that is what is required to achieve greatness, but will Neiman crack under the pressure?

Whilst I would not ordinarily be tempted to see a film about a music student striving to be a great jazz drummer, this film drew me in and held me like a magnet because it focused on Neiman and Fletcher and their professional working relationship – both its potential for achieving greatness and the risks of it becoming dangerous, destructive and toxic.

Both the lead actors in this film, Teller and Simmons, give truly outstanding performances. It is Simmons who is up for all the awards, including a Best Supporting Actor Oscar, in the more showy role; but Teller holds his own in the more difficult and low-key role, where the audience must feel empathy for a character who is far from sympathetic.

Neiman’s struggle towards becoming an accomplished musician, set against his battle of wills with Fletcher, makes for a gripping film where tension builds and builds towards a fitting crescendo. An intense rollercoaster ride. Very impressive.

Whiplash is out in cinemas across the UK now.
Collapse