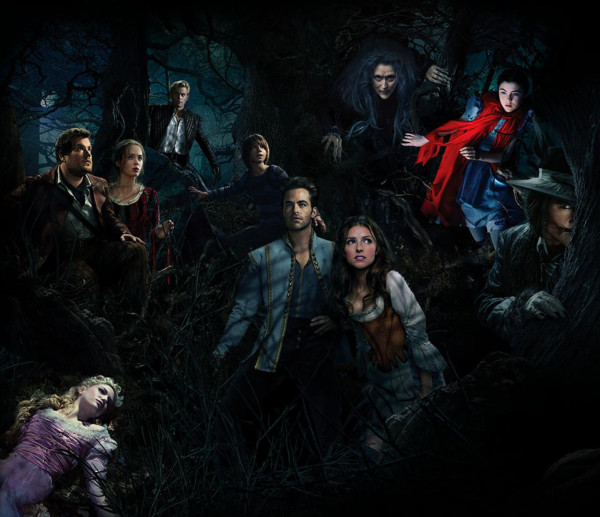 My EQView feature this week is a review of Into The Woods, the Disney film adaptation of the Sondheim stage musical. Fairytale or Nightmare / Hit or Miss?

INTO THE WOODS – REVIEW

Into The Woods is a hugely successful and award-winning stage musical, written by James Lapine, with music and lyrics by Stephen Sondheim. A film adaptation has now – finally! – been brought to the screen by Walt Disney Pictures.

Into The Woods weaves together several very well known and beloved Grimm Brothers’ fairy tales – Little Red Riding Hood, Cinderella, Jack and the Beanstalk, and Rapunzel. All the familiar characters from these fairy tales, those dear to our hearts, feature in Into The Woods. Into this rich mix is added an original story of a Baker and his Wife who want to start a family, but are childless because a Witch has placed a curse on their household. I think this blending of the old and the new, the familiar and the unknown, is one of the strengths of the piece.

All of the characters head here for a reason, and the woods are a place where you can be free, pursue your dreams and have adventures; but they are also a place to hide, where dark secrets can flourish, and where danger lurks close by. So you go into the woods at your own peril, and you have to be prepared to take the rough with the smooth.

The film has a stellar cast – including Meryl Streep as The Witch, James Corden as The Baker, Emily Blunt as The Baker’s Wife, Anna Kendrick as Cinderella, Chris Pine as Cinderella’s Prince, and Johnny Depp as The Wolf – each of whom play their parts to perfection. The actors are very well matched to their parts, so much so that their parts could have been written for them, and they work very well together, making a very strong ensemble.

In addition, the characters, the woods, and the settings, are all brought vividly to life on the screen, and the film looks good enough to eat and has stunning special effects.

The stage musical Into The Woods is very dark, brutal and cruel in places, and there were concerns that Disney would dilute these elements of the story, giving the film a more upbeat ending. On the whole, these fears are unfounded. However, the second half of the film, the darker section of the musical is undoubtedly weaker, and I felt the film lacked the “punch” of the stage version.

Into The Woods should make you look at fairy tales in a new light, as it explores their darker elements and takes you beyond the familiar “and they lived happily ever after” ending. It poses a key question of “Do the characters really live happily ever after?” when they get what they wish for and when their dreams supposedly come true. The stage version is much more successful at examining the unhappiness inherent in the human condition and how and why most people often feel unfulfilled.

Overall, a good film adaptation of a highly successful stage musical, with excellent performances from a stellar cast, despite the weaker second half compared to the stage musical. The film therefore lacks that essential bit of fairy dust, the icing on the cake, which would have made it truly magical.

Into the Woods is out in cinemas across the UK now but, if you want to compare and contrast this film version to a stage version, you can rent or buy the excellent Regent’s Park Open Air Theatre production (2010) from Digital Theatre.