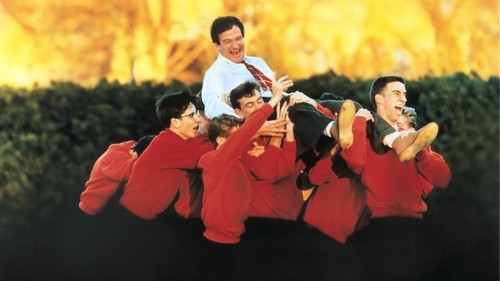 My EQView feature this week is a belated tribute to Robin Williams, an actor who truly touched my heart with every performance he gave. I have written about one of his films which means the most to me personally – Dead Poets Society. I originally watched this film when I was nineteen and it made a very profound and lasting impression on me. It taught me the importance and the value of independent thinking, of being your own person and of carving out your own way in the world. A truly inspiring film, as thought provoking today as the year it was made.

My EQView review of Dead Poets Society is here:
http://eqview.com/2015/01/02/dead-poets-society-review/ 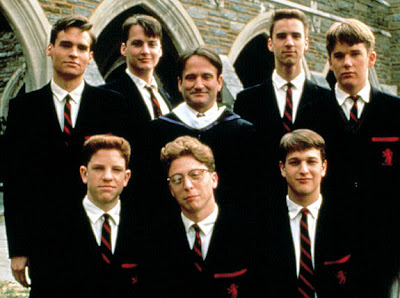 As the year ends, I have decided to pay my belated tribute to Robin Williams, an actor who truly touched my heart with every performance he gave. This post features one of his films which means the most to me personally - Dead Poets Society (1989).

Dead Poets Society is set in Welton Academy, an elite US boarding school for young men. The Academy is very conservative, built on the firm foundations of "tradition, honour, discipline, excellence". The school is an academic hothouse and the young men are taught to follow the rules and to obey authority. There is very little room for free thinking, being your own person and following your own path. But things are about to change!

Robin Williams plays John Keating, an inspirational English teacher who teaches poetry. He is newly arrived at Welton Academy as a teacher but is an Old Boy of the School. Williams excels in this particular role because he is able to create a sympathetic and charismatic larger-than-life character, who is truly inspirational and someone pupils would instinctively look up to. Williams plays Keating as a remarkable and unique individual who brings real magic into the classroom.

Keating uses unorthodox teaching methods in an attempt to instill into his pupils a true appreciation of, and love for, poetry. He also tries to nourish and develop them as people, urging them to "Carpe Diem" (Seize the Day) and, as the famous quote goes, to make their lives extraordinary. He wants his pupils to be able to think for themselves, not just to follow the herd and to conform. The character of Keating is based on a real teacher and most people have been lucky enough to have at least one such inspirational figure like Keating grace their school lives.

When Keating was a pupil at Welton Academy he was one of the founding members of The Dead Poets Society, a group who used to meet in a nearby cave at night to read poems aloud. When Keating's pupils find out, they resurrect the Society, meeting in the cave regularly at night, and they become a close-knit group. Keating's teachings and membership of the group helps each of these individuals to grow, and they all try out new things and take on new challenges.

One of the bravest aspects of Dead Poets Society, and something that gives the film integrity, is that it does not have a happy upbeat ending. Through the character of Neil Perry, played by Robert Sean Leonard, the film shows how difficult it can be to follow your heart, and try and be your own person, when the weight of parental expectations and pressure is against you. It highlights the high price that people often pay for trying to follow their dreams and making their own way in the world.

The happy times of magic, fun and free thought in the classroom are painfully cut short, but you can see that Keating has made his mark on each of the young men he has taught. He has lit a fire in their hearts which will burn for a long time to come.

I originally watched this film when I was nineteen and it made a very profound and lasting impression on me. It taught me the importance and the value of independent thinking, of being your own person and of carving out your own way in the world. So, if you have never watched Dead Poets Society, I am heartily recommending it now. It's a truly inspiring film and as thought provoking today as the year it was made.

Dead Poets Society is available to rent or buy on DVD.
Collapse