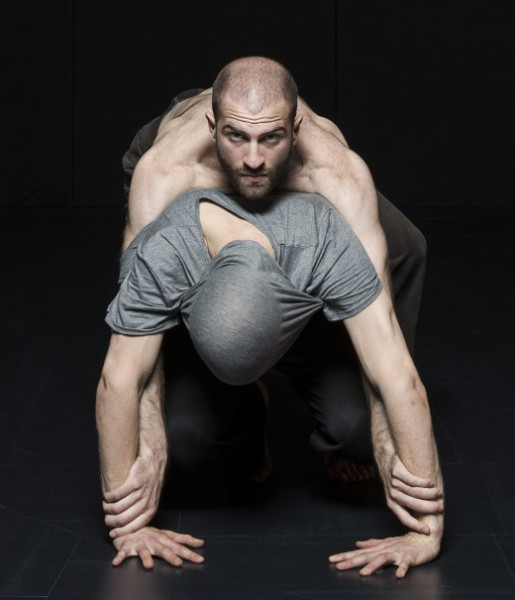 My EQView feature this week is a review of John by DV8 Physical Theatre, currently playing at the National Theatre, which tells the extraordinary life story of a man named John. Powerful and hard-hitting. Highly recommended :)

DV8 Physical Theatre is a dance company with a difference. They tell powerful and hard-hitting stories, and their work is designed to provoke discussion and debate on key political and social issues of the day. Their latest work is currently playing at the National Theatre and it tells the extraordinary life story of a man named John.

John is a middle-aged man who has had a very eventful life and his story encompasses child abuse and neglect, beatings, domestic violence, rape, drugs, alcohol, homelessness, HIV, relationships, arson, crime, and death (many of those closest to John die). It is the story of a man, with his back up against the wall, facing multiple challenges, fighting hard to survive and to make a better life for himself.

Whilst it is a hard story to watch, especially the first section on John’s early family life, the story is gripping from start to finish and speaks to the resilience of the human spirit. Despite all the challenges John experiences in his life, he keeps going, trying to forge bonds with people, and never giving up on his search for love.

My favourite section takes an in-depth look at a gay sauna where John starts to go, still seeking a meaningful connection with another human being. We meet the owners, who explain how and why they set-up the business, and who let us in on the secrets of their success. We meet their customers, and explore why they come and what they are looking for. We learn the etiquette and the unspoken rules of the sauna. And we get a tour of the establishment, exploring its many facilities, and all of its nooks and crannies.

Whilst this section is light-hearted, playful and very funny, it explores serious issues in an intelligent and thoughtful way. It looks at the appeal and risks of unprotected sex in such an environment; and the highs, lows and potentially fatal consequences of party drugs and chem sex.

It considers in some depth the varying attitudes of gay men to unprotected sex, HIV, and HIV status, and stresses the importance of taking personal responsibility for keeping yourself, and those you are having sex with, safe.

This is also the section that has the strongest character sketches contained within it, and where the company ensemble playing is at its strongest. The rest of the piece tends to revolve around John with other performers playing supporting roles.

All the performers are outstanding but special credit has to go to Hannes Langolf, playing the title role of John. He is never off-stage and is responsible for telling, and carrying, the story. It is not easy to tell John’s story, warts and all, and to play John sympathetically so the audience is always with him, and never against him. Langolf plays the part to perfection and, as an audience member, you are rooting for John throughout the piece.

In summary, I felt John was bold, honest, raw and taboo breaking. The physical movement and dance was mind blowing and took my breath away. Unusually for a dance piece, John tackled very difficult and challenging social issues head-on, giving voice to a diverse range of opinions. The piece got my brain working overtime and succeeds in provoking discussion and debate on a range of pertinent social issues. Highly recommended.

John plays at the National Theatre until Tuesday 13 January 2015 and was broadcast live to cinemas across the UK and around the world on Tuesday 9 December 2014 via NT Live.

Follow the link to the production information on John at the National Theatre and to book tickets:
http://www.nationaltheatre.org.uk/shows/john
Collapse