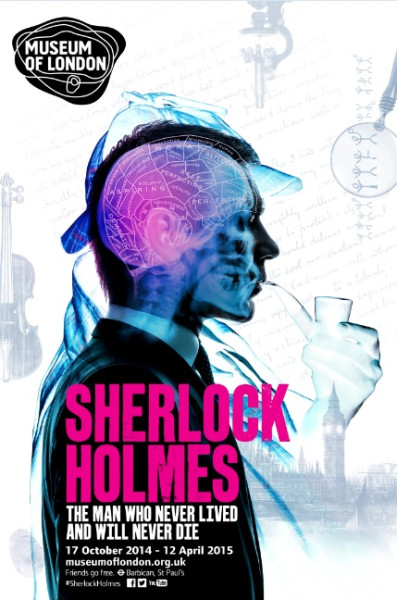 My EQView feature this week is a review of the Museum of London's Sherlock Holmes: The Man Who Never Lived and Will Never Die Exhibition. This is London’s first major exhibition on Sherlock Holmes since 1951.

My EQView review of the Sherlock Holmes Exhibition at the Museum of London is here:
http://eqview.com/2014/11/29/sherlock-holmes-exhibition-review/

This month I visited the Museum of London to see their Sherlock Holmes: The Man Who Never Lived and Will Never Die Exhibition. This is London’s first major exhibition on Sherlock Holmes, one of the world’s most famous fictional detectives, since 1951 and so this is a unique event.

As a longtime fan, I was really looking forward to seeing this exhibition and my expectations were high.

Upon entering you see a bank of TV screens, showing a wide range of film and TV representations of Sherlock Holmes. Holmes is closely associated with three key symbols: a deerstalker hat, a pipe and a magnifying glass. Most portrayals of Sherlock Holmes in the theatre, on film and on the TV, will feature these symbols or, at the very least, reference them in some way.

There are some amazing treasures in this exhibition. These include the original manuscripts of Arthur Conan Doyle’s notebooks where he penned the Holmes stories; the original cover art for The Strand Magazine, which published all the Holmes stories; original copies of Beeton’s Christmas Annual, which contained the first Holmes story A Study in Scarlet; and most breathtaking of all, a superb selection of Sidney Paget’s original illustrations for The Strand Magazine. These very rare and priceless originals were one of the key highlights of the exhibition.

The publicity material for the exhibition had highlighted how it would be looking at the different representations of Sherlock Holmes on stage, on film, and on TV, through the ages, and around the globe. I had gone along to the exhibition expecting this to be covered in depth; and so I was very disappointed by the omission of these elements. There was a distinct lack of analysis of how the famous detective had been portrayed over time, which I had eagerly anticipated.

One element of the exhibition that has been given a lot of media coverage is that it features the famous Belstaff coat, as worn by Benedict Cumberbatch in the hit BBC TV series Sherlock. In the exhibition, the coat is simply displayed within a glass case. The coat comes to life when it is worn by someone and, as they walk/move, the coat swishes and swirls around. Stuck behind a glass case, inert and static, it loses its magic.

A key opportunity is missed. It would have been really interesting to read or hear the Sherlock costume designer outline how they went about costuming a modern day contemporary Sherlock. It would have been even better if they had talked about costuming the other key characters in Sherlock like John Watson, Mycroft Holmes and Jim Moriarty. But you don’t get any of this context or detail and so I was left wanting.

My favourite exhibit was right at the end of the exhibition and featured The Reichanbach Falls. The exhibit was innovative, creative and it took my breath away. You pass along a walkway, and one side of the wall is taken up by a giant screen, playing images of The Reichenbach Falls in Switzerland. As you enter, you can hear someone reading sections from The Final Problem and The Empty House, both stories relating to Holmes’s death at the hands of Professor Moriarty at the Reichenbach Falls. The words are hushed and whispered, creating a sense of secrecy, intrigue and suspense. You hear the feared name of Moriarty. You genuinely feel as though you are in one of the Holmes stories. I stayed in the exhibit, listening to the words, and watching the Reichenbach Falls playing on the screen in front of me, for quite some time, and I found the exhibit very atmospheric and moving. I will remember being in the exhibit, watching the waterfall, and hearing the hushed words, for a long time to come.

Overall I would say I was underwhelmed by the exhibition. It contains some real treasures, like the Paget illustrations which are well worth seeing, and I was very taken by the exhibit on the Reichenbach Falls. I was expecting a lot more, in particular an examination of how Sherlock Holmes had been represented on stage and screen, over the years, and around the globe. The exhibition spent too much time and allocated too much space to looking at Victorian London, without making a strong enough link back to Sherlock Holmes and his world. I left disappointed and fervently hoping that there will be another Sherlock Holmes exhibition in London very soon that does real justice to my beloved Sherlock Holmes.

Sherlock Holmes: The Man Who Never Lived and Will Never Die runs at the Museum of London from 17 October 2014 to 12 April 2015.