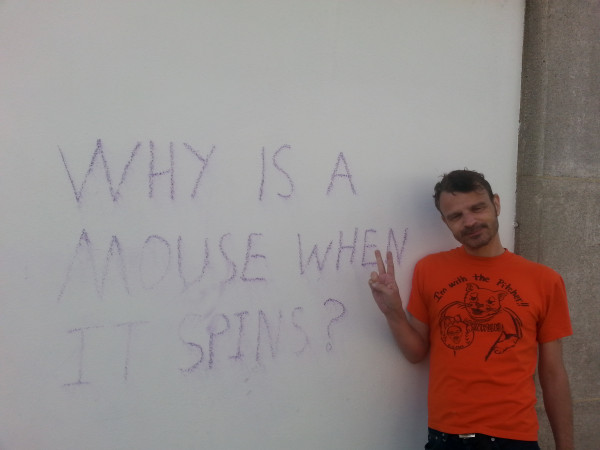 My EQView feature this week was a tongue-in-cheek interview with the enigmatic Fagburn, creator of the blog about gay men and the media, politics and gay culture.

The enigmatic Fagburn, creator of the renowned blog which critiques gay men, the media, politics and gay culture, here shares his outlook on life, motivations, and future collaboration with Fracking for Gays BP.

EQView: Choose five words to describe who you are and what you are about/stand for.

How did your blog come about?

I was trying to come up with ways to save my home for abandoned labrapoodles, and thought starting a left-wing gay critique of the media, politics and culture would get the money rolling in.

What did you set out to do when you started writing your blog? What was its purpose?

An increasing sense of utter despair when reading the reporting of gay news stories; so much of it is nonsense, which, in the age of the internet, is quite easy to check in five minutes.

I have an old-fashioned and dull obsession with things like truth, fact-checking and evidence, so thought I’d document these failings, as well as documenting the things that are good and great and funny.

Has the blog achieved this/delivered on this vision?

Has anyone you respect ever fallen out with you over something you have written on your blog?

Not that I can think of. Various ‘gays of note’ have followed me then blocked me on Twitter, but then so has Melanie Philips.

The bigger the head, the thinner the skin…

How would you like the blog to develop going forwards?

I’m working on the Fagburn 2015 Awards – where anyone who pays £4,500 for a table at the awards ceremony gets a prize.

What do you love and hate about writing as an activity?

Love? Communicating my thrilling thoughts and ideas to the world!

Any new projects in the pipeline that you want to tell us about?

I wake up every day and wonder why bother. You tell me.

What are your passions in life?

My mum and my sister, my late friend Peter Burton, and my boyfriend, Tom. I’d be dead, if it wasn’t for them.

[Pause while Gwyneth Paltrow comes on and cries...]

Name the three gay men whom you most admire and why.

I tend to be fascinated by pretty horrible people, straight or gay. Peter Cook, Mark E Smith etc. The – living – gay men who regularly bring me the most pleasure are:

Eddie Mair, cause his sardonic (piss) take on Radio 4’s current affairs programme is the second highlight of my day;

David Sedaris, the American essayist, I love his delight and detail on the absurdities of modern life, and how we go bumping along trying not to get ground down by others’ idiocy;

Tom Daley, you may not have heard of him. He is a very promising 10m solo platform diver. I’ve been raving about him for years – but thought it best to keep it quiet till he was legal. He is aesthetically quite pleasing, I have heard, but I mainly love the way he always looks so happy. As a devout miserabilist, I find this – genuinely – life-affirming.

Is there a particular event in gay history that speaks to your heart? What is it and why is it special to you?

There were many uprisings in Paris in the late 19th Century against men being forced apart from their boyfriends in prison, and a clamping down on cruising grounds. Because we were fleeting figures, little is know about them, but hurrah for these spontaneous ejaculations of rebellious joy.

What do you have against the lovely Peter Tatchell?

I don’t. There is much to be admired about Saint Peter, but I don’t think anyone should be above criticism. As I’m sure he would agree.

How would you describe your politics?

Name your favourite places to go and things to do in Brighton?

Going and sitting on the beach, as the tide comes in/out, and watching the sun come down, and thinking about things is good therapy.

I also like charity shopping on St James’s Street and London Road. Queen’s Park, looking at the duck pond.

How do you want to be remembered? What do you want written on your gravestone/in your obituary?

I’d be quite happy being forgotten, to be honest, and embrace my own insignificance. Not having a Napoleon-complex.

If not, can I have my corpse burned on one of those burning Viking norse longship things? Where all my ex-boyfriends have to queue up and throw themselves on it.