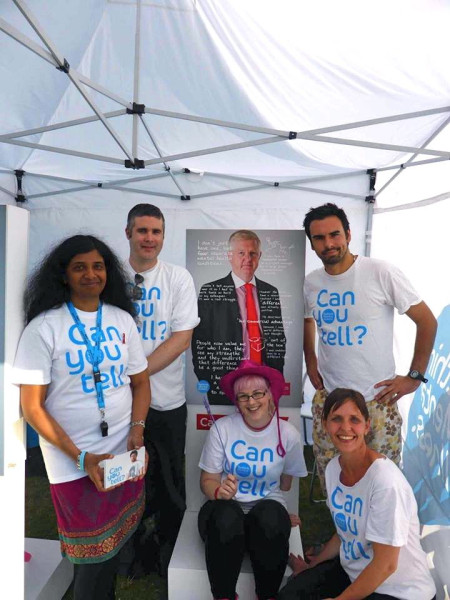 My EQView feature for World Mental Health Day on Rethink's Can You Tell? Project is here:
http://eqview.com/2014/10/10/rethinks-can-you-tell/

RETHINK’S CAN YOU TELL? MENTAL HEALTH PROJECT – A PERSONAL TAKE

Rethink Mental Illness is a charity that believes a better life is possible for millions of people affected by mental health issues.

Over the last year, I was involved with Rethink’s Can You Tell? project, funded by Time to Change. In this article I look back on my involvement in the project and reflect on what we achieved and what I learnt.

I was on Rethink’s Can You Tell? Steering Group and I was a campaign volunteer at five Can You Tell? events – the Lambeth Country Show, Brighton Pride, Chelmsford High Street, Peterborough’s LAMMA show, and the Whitgift Shopping Centre in Croydon.

I had a very positive experience at all the Can You Tell? events and taking part in the events, working with the Rethink team and the other volunteers, made me much more confident about speaking out on mental health issues and challenging mental health stigma and discrimination.

I have always been very open about my mental health issue, and happy to share my experiences, with my friends, family and work colleagues. But I have never before spoken to members of the general public about these issues. I was very nervous before my first event (Lambeth Country Show) and I found it very hard initially to approach people and to engage them in conversation. But it got easier as the shift went on and as I got used to approaching people and talking to them.

Each of the events was different – I went to a London fair, a Pride event, a High Street, a farmers’ market, and a shopping centre. Some events were easier than others. It was very easy to talk to people at Brighton Pride – LGBTQ people understand stereotypes, prejudice and discrimination, and many are actively involved in campaigning activities, so they understood very quickly and easily who we were and what we were about. But we were received positively everywhere we went, and people were much happier to talk to us and spend time with us than I had assumed they would be.

The surprise event for me was Peterborough’s LAMMA show – the farmers’ market. The majority of visitors to the show were farmers, men, self-employed, working the land, and living in rural communities. I am a woman who has always worked in the public sector in office jobs, and I have only ever lived in big cities. Would I be able to talk to farmers and find a connection? The answer was yes. I was surprised at how many farmers were happy to stop and talk, speak about mental health, and share the difficulties they were facing and the pressures they were under. We were able to have many meaningful conversations on a day when I really didn’t expect to.

By the time I got to my fifth event, I was very comfortable approaching people and confident about talking to them about my own story and experiences, the Can You Tell? campaign, Rethink and Time to Change. Taking part in the Can You Tell? events equipped me with the confidence and the know-how to speak out about mental health issues to a much wider audience.

People’s response to the exhibition and to us at the events was very positive. People were very keen to talk to us, to listen to our stories, and to share their own experiences with us. They were particularly interested in learning where they could go to access further help, support, information and advice.

I believe the Can You Tell? project made a real difference, because by sharing our stories and our experiences, others affected by mental health issues – either personally, or as a carer, relative or friend – knew they were not alone; there were many others facing similar issues; and they could be directed to sources of help, support, information and advice. It showed people with mental health issues could get better and recover, and return to being full and active members of society.

My involvement with the Can You Tell? project, both as a Steering Group member and as a campaign volunteer, made me realise first-hand the benefits of being open, and speaking up about, mental health issues. Its Time to Talk. Its Time to Change.

Can You Tell? project on the Rethink Website:
http://www.rethink.org/get-involved/campaigns/can-you-tell

Sign up to become a Rethink campaign activist here:
http://www.rethink.org/get-involved/campaigns/become-a-rethink-mental-illness-activist 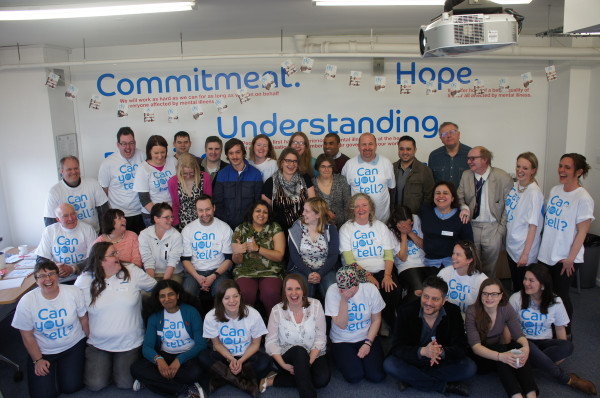