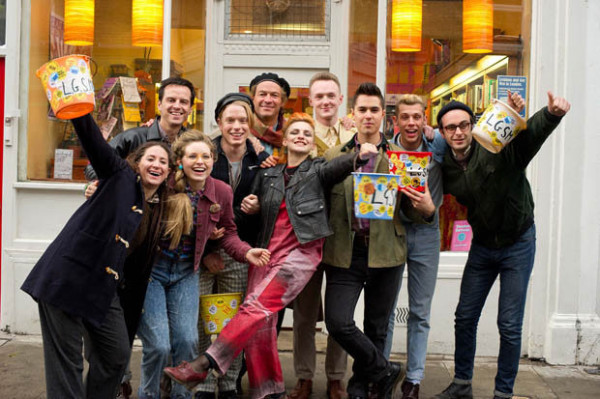 My EQView feature this week is a review of Pride, a British film set during the 1980s miners’ strike, telling the true story of how a group of London-based lesbians and gays lent their support to the striking miners in Wales. It shows how two very different communities got to know one another and realised that what they had in common far outweighed their differences.

If you want to go and see a film that is intelligent, entertaining, uplifting, inspiring and a lot of fun, I recommend you go and see Pride! 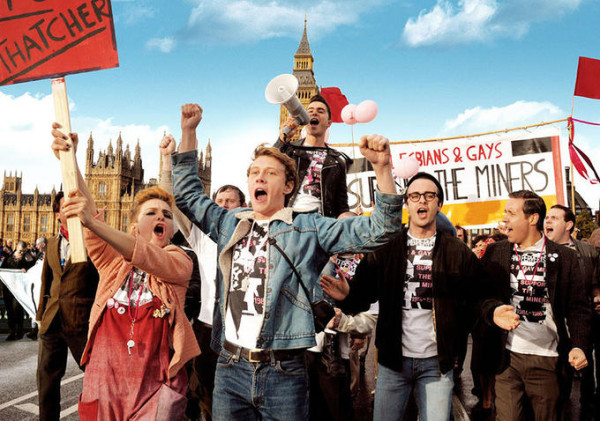 Pride is a British film, set during the 1980s miners’ strike, telling the true story of how a group of London-based lesbians and gays lent their support to the striking miners in Wales, and how two very different communities got to know one another and realised that what they had in common far outweighed their differences.

The film focuses on how the lesbians and gays decide to show their solidarity by raising money to support the miners through the tough days of the strike. They form the Lesbians and Gays Support the Miners group (LGSM) and begin collecting money in earnest and with real passion.

One of the founding members of the group is Mark Ashton, who is young, attractive, energetic and charismatic; a born leader. He firmly believes that oppressed minority groups should show solidarity for each other, and support one another, as it is only by working together that they stand any chance of overcoming their common foes – the Thatcher Government, the police and the tabloid press. Mark’s zeal is a force to be reckoned with and he is able to overcome most of the obstacles in his path.

We see Mark inspire others to want to help the miners – the founding of the LGSM group – and we see them raising lots of money. The group are undeterred when the Union is reluctant to accept their money, and they decide to choose a Welsh mining village and donate their money direct. The miners invite the group to their village to thank them for their support and their money and this is when the two groups of people start to get to know each other. The key to the film lies in the scenes where the two groups of people are interacting; whether this is when the LGSM are visiting the Welsh village, or when the Welsh miners and their wives come down to London.

The focus of the film is showing these two very different groups of people meeting each other, getting to know one another, understanding each other, and realising how much they have in common.

Pride is a very funny film, packed full of humour, ranging from gentle light-hearted touches, to caustic one-liners, and big set-piece scenes with laugh-out-loud moments. It is also a heart-warming film because its focus is on the support and compassion people can, and do, provide for each other in times of need.

I was profoundly moved by some of the individual stories told within the film. One of the fictional characters is Joe (George MacKay), a young gay man, not yet out to his family, nicknamed “Bromley’ by the group because that is the suburb where he lives. You follow Joe’s personal journey from his first attendance at a Pride march at the start of the film, to being actively involved in LGSM, and becoming a key member of the group – its official photographer.

The other individual I wanted to highlight was Gethan (Andrew Scott), another founding member of the LGSM group, a gay man in a long-term relationship who runs the gay bookshop. Gethan is Welsh but has not been back home for 16 years, because when he came out he was rejected by his family, including his Mum. So he escaped to London and has not been back since. For him, returning to Wales is bittersweet and I really felt for him. I was touched by how the community welcomed him, and how much this meant to him, and was profoundly moved by the scene when he takes the opportunity of being back in Wales to try and reconnect with his Mum. I challenge even the most hard-hearted of people not to shed a tear at this point!

The film has a star-studded cast of British actors – as well as those named above it also includes Bill Nighy, Imelda Staunton and Paddy Considine. Pride features a very talented ensemble cast, all of whom create fully-rounded and engaging characters whom you genuinely care about. And it was very pleasing to see as many strong women characters featured as men, both in the LGSM group and in the Welsh mining village.

Pride has been very well received and successful in a number of countries outside of the UK because it is primarily a film about people, which everyone can relate to – you don’t have to be LGBT or a miner to appreciate it! It is a mainstream film with universal appeal.

If you want to go and see a film this weekend that is intelligent, entertaining, uplifting, inspiring and a lot of fun, I recommend you go and see Pride!

Pride is out now in cinemas across the UK.
Collapse