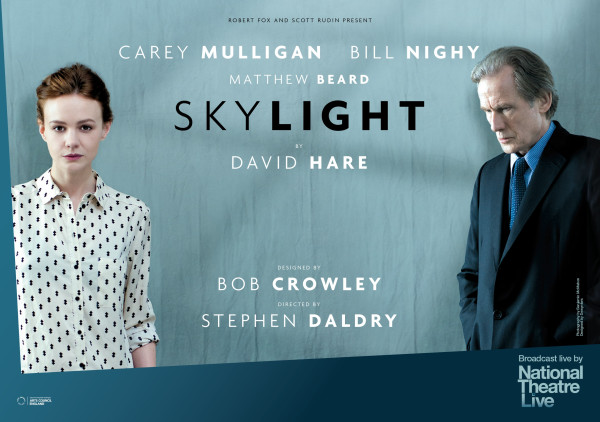 For my EQView feature this week I reviewed Skylight, a revival of a David Hare play, currently midway through a very successful and sold-out run in the West End. An intelligent and thought-provoking production that absorbed and entertained me, with Bill Nighy and Carey Mulligan delivering very strong powerhouse performances. Must-see!

Skylight is a revival of a David Hare play starring Bill Nighy and Carey Mulligan, currently midway through a very successful and sold-out run in the West End.

Kyra Hollis (Carey Mulligan) is surprised one evening by an unexpected visit from her former lover, an older man, Tom Sergeant (Bill Nighy). Kyra is a schoolteacher working in an inner-city London school and Tom is a very rich and highly successful restaurateur. They now live very different lives and move in very different circles. Tom’s wife has recently died and he is there to try and rekindle their romance. Fireworks ensue!

I first saw Skylight on Thursday 17 July via NT Live (National Theatre Live) at my local cinema, the Ritzy in Brixton, when it was broadcast live to over 500 UK cinemas. I was blown-away by the piece and so I saw it again this week at the Wyndhams Theatre in a cheap standing “seat” (if that isn’t a contradiction in terms!).

Skylight is written by David Hare and premiered at the National Theatre (Cottesloe) in 1995. Hare is best known for his political plays examining the state of institutions, politics and society in contemporary Britain.

Skylight is an unusual play for Hare because it is primarily a personal not a political play. It focuses on two people, an older man and a younger woman, Tom and Kyra, and their relationship – past and present. They are two very different people, living their lives in very different ways, by very different principles and values. The play explores political ideas and ideologies through a personal prism.

The play divides its time equally between exploring the relationship between Tom and Kyra, then and now, how it came about and why it had to end; and examining the conflicting political ideas and ideologies of the two main characters – Tom being a Thatcherite entrepreneur believing in capitalism and the free market and Kyra being a left-wing socialist trying to improve the quality of life for the children she teaches. I liked the way the play focused on a personal story, Tom and Kyra’s relationship, but managed to explore political themes and ideas through this frame.

It would be very easy to portray Kyra, working hard as a teacher for very little reward, living in very poor conditions, trying to make a difference, as all “good”. And by the same token, it would be very easy to portray Tom, the very rich Thatcherite entrepreneur, living a very comfortable and easy life, as all “bad”. But things are never that simple and life is much more complex. Nothing is ever black or white; there are endless shades of grey. Tom is charismatic, funny and full of energy, so you are prepared to forgive him his sins, whilst Kyra can be very self-righteous which means you do not always warm to her. It is to the great credit of the writer and the actors, who give very nuanced performances, that they maintain a balance so your sympathies are always evenly split between the two characters.

This is the type of theatre I love. There are only three actors (Tom’s son is the third character), and one static set, with no tricks, no effects, and no special staging. This means the actors have to do all the work, in terms of getting the audience to care about their characters and telling the story. It is theatre stripped to the bone, where the audience is only drawn in and carried along by the performances of the actors. Bill Nighy and Carey Mulligan are big name actors and both deliver very strong powerhouse performances.

Tom and Kyra as characters spend a large proportion of the play locked in an equal battle of wills and wits. It was a thrill for me to see a strong young woman on stage – intelligent, determined, passionate, opinionated, able to stand her ground and argue her case with real conviction. There are too few representations of strong women on stage and so it was a real delight to see this portrayal of a strong independent young woman, able to hold her own.

Skylight observes the classical or Aristotelian unities for Drama – unity of action, a play should have only one main plot/storyline; unity of place, a play should occur in a single physical place; and unity of time, the action in a play should take place over no more than 24 hours. Skylight’s main plotline is Tom and Kyra’s relationship, and their ongoing battle of wills and wits, and the action takes place in Kyra’s flat over the course of one day (late afternoon through to the following morning). The impact of focusing on one storyline and playing the piece in real-time is that it makes the play more absorbing and gripping for an audience.

In summary, an intelligent and thought-provoking production that absorbed and entertained me, with Bill Nighy and Carey Mulligan delivering very strong powerhouse performances. Must-see!

Skylight is playing at the Wyndhams Theatre until 23 August 2014.
Collapse