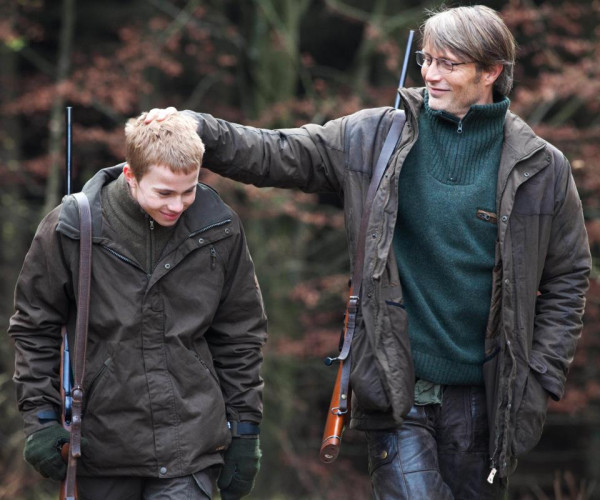 This feature was first published in Vada Magazine here:
http://vadamagazine.com/09/05/2014/vadafilm/hunt-denmark-eurovisions-cinema

The Hunt is a story of a modern-day witch-hunt, and follows what happens to an ordinary citizen when a false allegation about their conduct spreads. It is intelligent, thought-provoking, dark, powerful, shocking and moving, and grips from start to finish. A ground-breaking film which makes you think about serious issues long after the screening is over. Highly recommended.

“A story of a modern-day witch-hunt”
- Thomas Vinterberg, Director and Co-Writer of The Hunt

The Hunt is about what happens to an ordinary citizen when a false allegation about their conduct spreads.

Lucas is a nursery school helper/assistant and his whole life is turned upside down when a little girl in the nursery, Klara, makes an allegation of sexual abuse against him. Klara is the daughter of one of Lucas’s best friends.

Lucas is innocent, but that does not stop the lie from spreading and the whole town turning against him. Overnight, his life goes from one of normality to a living nightmare.

The Hunt shows how, in a small-town, a single lie can lead to your whole life unravelling and being destroyed; and how you can go from being a pillar of the community to a social outcast overnight, even when you are innocent and have done nothing wrong.

Klara is played by a beautiful little blonde girl, who looks like an angel and personifies innocence. It is inconceivable that such an angelic looking child could ever lie. And yet anyone who has ever had children, or worked with children, knows that children are capable of lying.

The scene where Klara is interviewed about the allegation shocked me to the core. On several occasions the interviewer asked leading questions, and put thoughts and words into Klara’s mouth, which were not there – he planted them. This was grossly unfair and unjust.

The principle of “innocent until proven guilty” fell down in this situation because the nursery staff decide Lucas is guilty whilst investigations are still ongoing, and inform parents that certain things have happened when the allegations are yet to be proven.

Lucas is newly divorced from his wife and is living separately from his wife and teenage son. The Hunt deals very sensitively with issues of separation, divorce, and family breakdown, exploring how fraught these relationships can be, especially when there are children involved.

Lucas becomes a leper and a social outcast, and his whole world falls apart because of this one false allegation of child abuse.

If you think this could never happen in real-life, think again! The story is a fictional one but it is based on real-life cases and so this can – and has – happened in the real world. The Hunt shows how suspicion breeds suspicion, and how quickly and easily one lie can spread and contaminate the whole water supply.

The Hunt was the first film I saw at the 2012 London Film Festival and it turned out to be my favourite film of the Festival because it moved me and touched me deeply.

To summarize, The Hunt is excellent and I would recommend it to anyone who wants to see a ground-breaking film, that makes you think about serious issues long after the screening is over. It is intelligent, thought-provoking, dark, powerful, shocking and moving, and grips from start to finish.

The Hunt is available now on DVD.