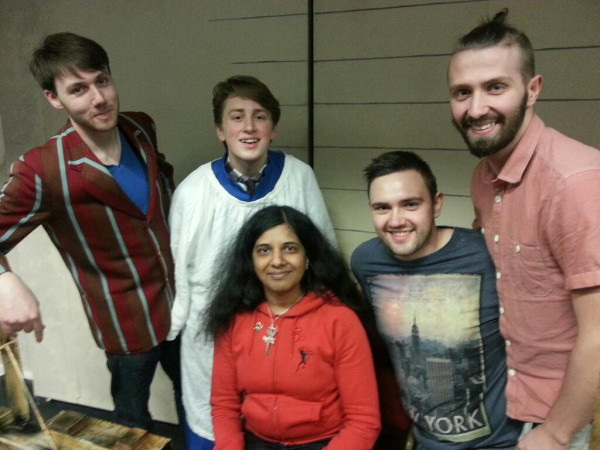 Me with the Sandel Cast
Photographer: Glenn Chandler

Just a very quick post to say that I had THE best time with the Sandel creatives and cast when I visited them during rehearsals at Above The Stag Theatre to interview them for my upcoming feature on Vada Magazine.

Cut and pasted from the Above the Stag Website:

Glenn Chandler's beautiful adaptation of the well-known cult gay classic was one of the major critical hits at last year's Edinburgh Fringe.

Set in Oxford in the 1960s, it tells the story of a love affair between a 19 year old undergraduate, David Rogers, and a precocious and beautiful Cathedral choirboy, Antony Sandel. When David is sent down after infringing college regulations, he is given a job as a teacher at the choir school - where Sandel is still a pupil. Add David's catholic friend Bruce, who is studying to be a priest, to the mix and the stage is set for a powerful showdown.

Though even more controversial today than it was in the 60s, Sandel is nevertheless very funny, witty and light-hearted, a tale about what love can do in any age when it takes over your life. The uncompromising ending left Edinburgh audiences stunned in their seats. Sandel is bound to both delight and shock.

*Angus Stewart's Sandel, long out of print, has now been republished by Pilot Press.

More details and tickets for Sandel, Above the Stag:
http://www.abovethestag.com/sandel/