This feature was first published in Vada Magazine here:
http://vadamagazine.com/11/04/2014/arts/orton-review

Orton is a new musical based on the lives of the 1960s gay playwright, Joe Orton, and his long-time lover and collaborator, Kenneth Halliwell. Orton is a great night out, fun and joyful, and it succeeds in telling the story of a complex relationship in an intelligent and thoughtful way. It is very enjoyable, a huge amount of fun, and has an excellent ensemble cast. New, innovative and different. I LOVED it!

Last week I saw a preview of Orton, a new musical based on the lives of the 1960s gay playwright, Joe Orton, and his long-time lover and collaborator, Kenneth Halliwell.

Orton and Halliwell’s stories are not an obvious choice for a new musical, encompassing depression, mental illness, murder and suicide, and I was not sure what to expect, much less if it would work.

However, I was surprised and delighted to find a real corker of a new musical. Orton is a great night out, fun and joyful, and it succeeds in telling the story of a complex relationship in an intelligent and thoughtful way.

Orton begins on the day Joe Orton and Kenneth Halliwell meet at RADA where they are both students. Orton is a fresh-faced youth, from a working class background and a council estate, newly come down from Leicester to explore the metropolis that is London. Halliwell is seven years his senior, a man of independent means, with a traumatic past. Orton and Halliwell are both learning and developing the crafts of acting and writing, they form a connection, and begin a relationship.

Orton then follows the highs and lows of their relationship from the happy days at the start, when they begin collaborating and writing together, to the real issues and tensions that develop in the relationship further down the line.

One of these issues was Orton’s promiscuity. Orton regularly went out cottaging and enjoyed casual sexual encounters with a wide range of men. One of the highlights of the show was a musical number about the joys of cottaging, where an imaginative use of a couple of swing doors very effectively conveys one of the old-style public lavatories where cottaging was commonplace. The song is unique, upbeat and a lot of fun.

Orton and Halliwell started out as equals and collaborators, but Orton rose to fame as a playwright and became a celebrity. Although Halliwell had collaborated with Orton, and in many cases made a significant contribution to Orton’s plays, he was never recognized or credited for his work. And Orton never publicly acknowledged Halliwell as his lover and partner.

Orton’s continued promiscuity, and his failure to publicly acknowledge Halliwell as his collaborator and lover, increased tensions within their relationship and contributed to Halliwell’s feelings of low self-esteem, depression and isolation. Halliwell feared Orton would leave him.

What comes across very strongly is Orton’s youthful exuberance and his passion for life, contrasted with Halliwell’s increasing sense of failure and feelings of despair. Halliwell’s mental state deteriorates, leading to the final tragedy.

There are 16 songs in the play and they are all performed with real joie de vivre and gusto by the ensemble cast. There are some very catchy melodies and the lyrics are sharp, witty and clever. All the songs are very enjoyable and a lot of fun.

The story races along with never a dull moment, and it is an engaging narrative because it is about real people and real lives, and the relationship issues tackled within the play are ones that many will have experienced and everyone can understand. I can honestly say the time flew by.

The entire ensemble cast is very strong, but I wanted to give a special mention to the two leads, Richard Dawes playing Joe Orton and Andrew Rowney playing Kenneth Halliwell, who really brought their respective characters to life, in a way where you could fully understand and empathize with both.

Simon Kingsley deserves a special mention for a truly show-stopping performance as Kenneth Williams. Kingsley does a magnificent impersonation of Williams but, much more than that, he manages to embody and represent the real spirit of Williams’s public persona. His performance as Williams is a joy to behold.

The staging is minimal yet very effective and incredibly clever. Over the course of the play, a wide range of settings are realistically represented, including RADA, Orton and Halliwell’s shared flat, Ramsay’s office, a prison, and a public lavatory!

In summary, this is an amazing show and a great night out. I recommend you give all those long-running West End musicals a miss and head on down to Above the Stag for something that is new, innovative and different. This is an intelligent and thoughtful show, very enjoyable and a huge amount of fun, with an excellent ensemble cast. Very highly recommended.

Orton plays at Above the Stag Theatre, Vauxhall, London, until 4 May 2014.

Follow the link to Above the Stag's official website where you can find out more about the production and book tickets:
http://www.abovethestag.com/whatson/ 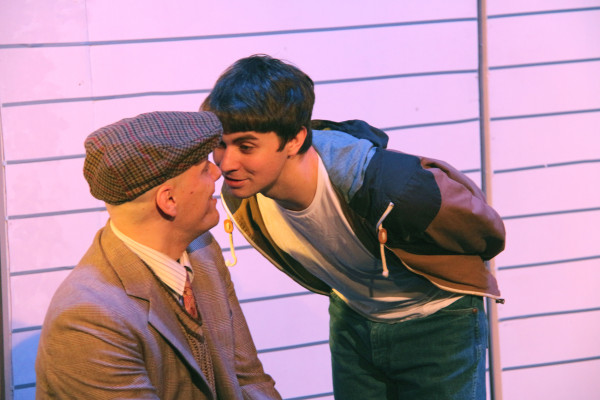