This feature was first published in Vada Magazine here:
http://vadamagazine.com/04/04/2014/vadafilm/bridegroom-review

Bridegroom tells the real-life love story of Shane Bitney Crone and Tom Bridegroom. Their love story was tragically cut short by a fatal accident, and the events following the accident transformed Shane into a passionate Marriage Equality campaigner in the US. Bridegroom makes a very strong case for Marriage Equality. A very powerful, deeply moving and truly inspiring film.

My wish for Bridegroom is that it will succeed in challenging prejudice and discrimination against LGBT people; and changing people’s hearts and minds in favour of Equal Marriage. I want people to recognize and appreciate that Love is Love.

The film Bridegroom tells the real-life love story of Shane Bitney Crone and Tom Bridegroom. Their love story was tragically cut short by a fatal accident, and the events following the accident transformed Shane into a passionate Marriage Equality campaigner in the US.

Bridegroom is the story of two individuals, Shane Bitney Crone and Tom Bridegroom, growing up in conservative small-town America, where you were expected to fit in and conform, and difference is neither accepted nor tolerated. They came to California in search of a new life, met and fell in love. They built a shared life together and made plans for the future. But their happiness came to an abrupt end when Tom died in a tragic accident.

Bridegroom features interviews with Shane, his family, and friends of both Shane and Tom, alongside photographs, home movies, videoblogs, and text messages. Taken together, they present a rich and detailed portrait of Shane, Tom, their relationship, and their life together.

First, Shane’s story, aspects of which moved me profoundly. Shane describes surreptitiously watching the film Philadelphia as a little boy and thinking that is what happened to all gay men – they got very sick and died. The story of his first schoolboy crush is heart-breaking. Shane wrote a letter to one of his closest male friends explaining how he felt about him. The recipient of the letter and his family publicized the letter with devastating consequences for Shane. Shane was no longer welcome at many of his school’s sporting events because his friend played on the sports team. These sporting events were a central part of American High School life and Shane was excluded from them. Shane was mocked and bullied at school and this got so bad that he stopped going to school.

Life became increasingly difficult for Shane at school and within his community, and he suffered from anxiety, panic attacks and depression. Shane describes one occasion when he went and got his father’s gun and seriously considered taking his own life. He decided against it because he realised the effect this would have on his family and how hurt and upset they would be.

After graduating from High School, Shane moved to California in search of a fresh start and a new life. For Shane, California represented freedom and an escape from small town mentality. California was a place where he could be himself. Not long after arriving in Los Angeles, Shane met Tom.

Tom, like Shane, grew up in small-town America and had a traditional and conservative family upbringing, even attending a military school. But Tom’s High School experience was markedly different from Shane’s. Tom was very popular, he got on well with everyone, he was extrovert and outgoing, and everyone was drawn towards him. Tom knew he was gay but only told a few of his closest and most trusted friends; he was not out to his family, his school or his community. For Tom, as much as for Shane, Los Angeles and California was a place where he could finally be himself, an out gay man.

Shane and Tom met, fell in love, and were together for six years. They had a shared life and together they bought a house, stared a business, adopted a dog and went travelling. Tom had even given Shane a “promise ring” because he wanted to marry Shane as soon as it became legal for gay men to marry in the state of California.

When you hear their friends speak about Shane and Tom and their relationship, and you see their photographs and their videoblogs, what strikes you is how much fun they had together, how much they enjoyed their life together, and how happy they were together.

Shane rarely felt able to show his love for Tom in public, through open shows of affection and love, like holding hands, hugging, or kissing. He was always too self-conscious, worried about what people might think or say, and scarred by his early experiences of homophobic bullying. They developed a code – three taps (tap, tap, tap) to say “I love you” – and they used this secret code to express their love for each other in public. Whilst this is romantic, I was sad they felt they had to hide their love in this way.

Whilst Shane’s family were completely accepting of their relationship, when Tom came out to his family and told them about Shane, he was forced to flee his family home. Tom’s family threatened both Tom and Shane with violence and accused Shane of turning Tom gay.

I was struck by how the two families, who held the same underlying values and beliefs, reacted in completely different ways. Shane’s family wanted him to know he was loved and they accepted him for who he was. They could see Tom brought Shane out of himself and Tom made Shane happy. Tom’s family, by contrast, let their homophobia rule over them, and rejected Tom because he was gay, refusing to accept Tom and Shane’s relationship. This rejection caused Tom and Shane heartache and unhappiness.

Shane and Tom were in a committed, long-term and loving relationship and were planning a future together. But Shane’s world was turned upside down when Tom tragically died in an accident on 7 May 2011. Events following the accident brought home to Shane the brutal reality that, because they were not married, their shared life counted for nothing in the eyes of the law. Even though he was Tom’s partner, he had no rights in relation to Tom.

When Tom was taken to hospital, Shane could not be with him nor was he entitled to any information about Tom’s condition as he was not family. Following Tom’s death, Tom’s family took his body back to his hometown and Shane never heard from them again. Shane was not invited to the funeral and was threatened with violence if he tried to attend. Shane was not mentioned in Tom’s funeral service or in the programme. Tom’s family simply erased Shane’s existence from Tom’s life because they refused to acknowledge or accept Tom was gay.

Shane’s personal experience of what happened to him following Tom’s death, and the fact that he was willing to share his story and his experience, has transformed Shane into a passionate Marriage Equality campaigner in the US. Something positive has come out of a deeply personal tragedy.

It is worth briefly mentioning how Bridegroom came about. On 7 May 2012, the first anniversary of Tom’s death, Shane posted a video tribute to Tom entitled “It Could Happen To You” on YouTube chronicling their relationship and the aftermath of Tom’s death. Shane wanted it to serve as a warning to other LGBT couples, and show the world what can happen when two people are legally barred from having equal rights and equal protections under the law to marry.

Shane’s video went viral, has received over 4 million views to date, and was translated into over 20 different languages. It was clear Shane’s story was one that many people could relate to and had touched people all around the world. A Kickstarter campaign was launched to make a feature length documentary and by mid July 2012 Bridegroom became the most funded documentary in the history of crowd-funding with over 6,500 backers. Bridegroom premiered at the Tribeca Film Festival in April 2013, had its US TV premiere on the Oprah Winfrey Network in October 2013, and was released for instant streaming and on DVD (US) in November 2013.

I had the privilege of seeing Bridegroom as part of BFI Flare, the London LGBT Film Festival, on the day that Equal Marriage came into effect in England and Wales. By presenting the real-life story of a gay couple and their love for each other, Bridegroom succeeds in making a very strong case for Marriage Equality.

My wish for the film Bridegroom is that it will succeed in challenging prejudice and discrimination against LGBT people; and changing people’s hearts and minds in favour of Equal Marriage. I want people to recognize and appreciate that love is love. Overall, a very powerful, deeply moving and truly inspiring film. Very highly recommended.

Bridegroom is now available to stream online for Netflix subscribers.

Follow the link to see Shane's video tribute to Tom "It Could Happen To You":
http://www.youtube.com/watch?v=pR9gyloyOjM 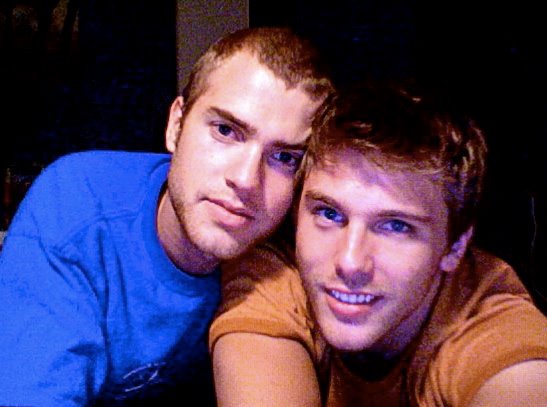