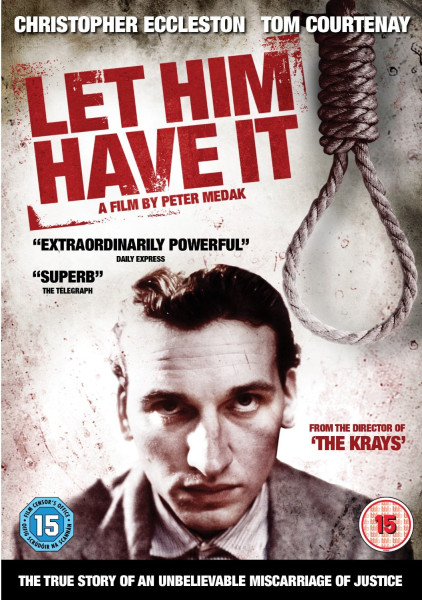 Vada Magazine now has a "Film of the Week" feature where Vada film writers choose their favourite film of the week from the films being shown on TV that week (we only cover the free channels). This week, I chose Let Him Have It as my Film of the Week.

I have chosen Let Him Have It because it is a very powerful and moving British film, based on the true story of Derek Bentley, highlighting a real miscarriage of justice.

The film is set during the 1950s and gives a real sense of what it was like to live in Britain at that time. Rationing is in place, money is tight, and life is hard. But families and communities are close-knit.

Let Him Have It tells Derek Bentley’s story, seen through his eyes. Derek is played by Christopher Eccleston in what would be a breakthrough role.

Derek is a kindly soul, but has learning difficulties, and this makes him vulnerable. Written off as “subnormal”, often mocked and rejected, Derek wants to have friends and to fit in. He is befriended by Christopher Craig and is pleased to be included in Chris’s “gang”. Derek wants to impress and prove himself.

But Derek’s new found friendships prove his undoing. He gets mixed up in a burglary, where Chris kills a police officer by shooting him. Derek is an accomplice and the prosecution argues that Derek’s words – “Let him have it” – incited Chris to kill the police officer. Yet Derek may simply have been asking Chris to hand over the gun.

The final section of the film focuses on Derek’s trial and the verdict, and his family’s increasingly desperate fight to overturn Derek’s death penalty. The film really draws you in so that you feel the intense pain and suffering of Derek and his family, and you grieve for them and with them.

Let Him Have It highlights real injustice within the British criminal justice system and is a powerful testament against the death penalty. Highly recommended.

Let Him Have It Trailer:

You can see what the other Vada film writers chose as their Film of the Week here:
http://vadamagazine.com/24/03/2014/vadafilm/film-week-3
Collapse