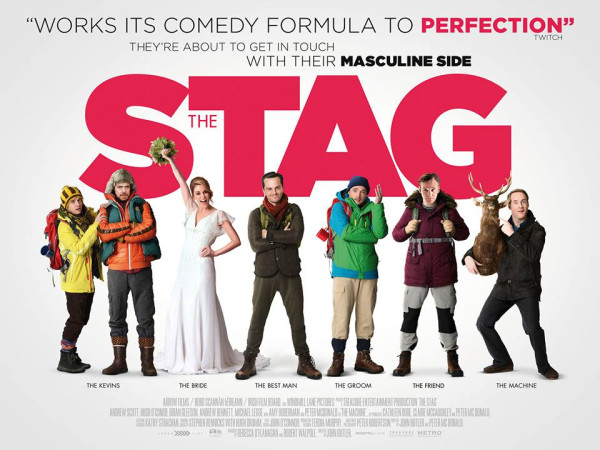 This feature was first published in Vada Magazine here:
http://vadamagazine.com/22/03/2014/vadafilm/stag-review

The Stag is an Irish comedy drama where a group of New Men find their Stag Weekend, which is supposed to be an idyllic walking holiday, rapidly descents into the nightmare from hell!

Let The Stag surprise you! There is no much more to it than meets the eye :) 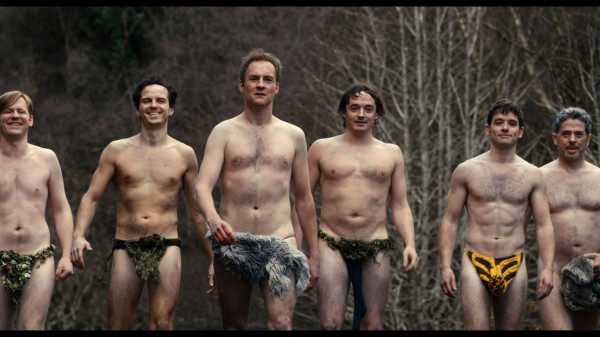 The Stag is an Irish comedy-drama about a stag weekend that the groom doesn’t really want, which rapidly descends into the nightmare from hell because he is forced to invite along the bride’s brother, “The Machine” (the nickname tells you all you need to know!).

This was a film that took me by surprise because I was expecting a straightforward laugh-out-loud raucous comedy about a stag weekend; outrageous adventures and male bonding. But I was delighted to find that there was a lot more to this film than meets the eye. Inside its bold, brash and loud exterior, there is a real pearl of a film; tender and heart-warming.

The groom, Fionnan, and his circle of male friends, are all New Men, metrosexuals through and through. Fionnan is more obsessed with wedding planning than his bride to be, Ruth, taking care of all the details, including the font on the place cards. Fionnan doesn’t even want a stag do – he would rather go to Ruth’s hen party.

But under intense pressure from Ruth, the Best Man (Davin), played by Andrew Scott, cajoles Fionnan into agreeing to a stag weekend. The friends decide to do something adventurous outside of their comfort zone and opt for a hiking weekend in the great outdoors in rural Ireland.

The stag weekend becomes a real challenge when they are forced to invite along Ruth’s brother, “The Machine”, the ultimate Alpha Male. Despite their best efforts to prevent The Machine from coming along, including telling him they are embarking on a silent religious pilgrimage to ancient historical sites, The Machine turns up anyway. What could have been a relaxing walking holiday rapidly descends into the nightmare from hell as soon as he arrives on the scene.

The film has its fair share of laugh-out-loud moments – the scene in the camping shop when Fionnan and his friends try out a tent, and the electric fence scene during the weekend both stand out for me. However, what surprised me was that The Stag is so much more than a comedy film about high jinks on a stag weekend.

The film gives us a real insight into the lives and the characters of all the men featured in the film, and looks at lost love, broken hearts, gay relationships, male friendships, families and even debt. Within the context of a light-hearted comedy film, these subjects are explored in some depth and, as a viewer, you feel a real connection with, and an empathy for, all the characters. Over the course of the weekend, all the characters learn something new about themselves and about each other – it is a journey of exploration and self-discovery.

I liked the fact that The Stag continually confounds your expectations – as the film unfolds, you learn more about the men as individuals and their collective friendships. You realize The Machine has a kind heart when you scratch beneath the surface. You realize the closest friends keep secrets from each other because the truth is too painful. And you learn why no woman is ever good enough for Davin.

Fionnan’s brother, Kevin, is gay and is in a long-term committed relationship with an older man, also called Kevin. Both Kevins are on the stag weekend. Kevin is “out” to his family, but his relationship with Kevin is not accepted, and this is problematic in terms of who is invited to the wedding and who will attend. The film looks at issues facing all LGBT people – “coming out” to your family and your sexuality/partner being accepted by your family. The Stag examines the possibilities of acceptance and reconciliation within families and this is highly unusual in a “comedy” film.

Overall, I would say The Stag had more sensitivity, depth and complexity than I was expecting and it is a better film as a result. I am recommending The Stag because there is so much more to it than meets the eye, and I want people to go along and be surprised!

The Stag was released in Ireland on 7 March and in the UK on 14 March. It will premiere in the US at the Tribeca Film Festival next month where it will be titled The Bachelor Weekend.