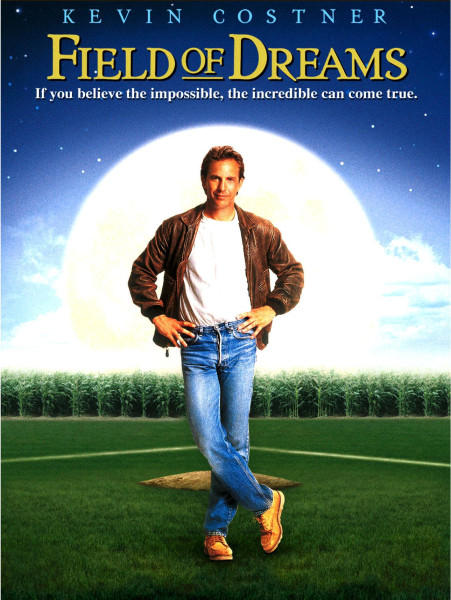 Vada Magazine now has a "Film of the Week" feature where Vada film writers choose their favourite film of the week from the films being shown on TV that week (we only cover the free channels). This week, I chose Field of Dreams as my Film of the Week.

I have chosen Field of Dreams because although I saw the film eons ago, it made a deep and lasting impression on me when I saw it which has stayed with me right through to the present day.

Field of Dreams is an American fantasy-drama film, directed by Phil Alden Robinson, who also wrote the screenplay, based on W. P. Kinsella’s novel Shoeless Joe.

Superficially, the film is about American baseball, but I have zero interest in sport and I know nothing about baseball. The film is really about trusting your instincts, having the courage to follow your dreams, and family.

Field of Dreams tells the story of Ray Kinsella, an Iowa farmer, played by Kevin Costner. Ray is a very ordinary and average American family man with a wife (Annie) and a young daughter (Karin).

One day, whilst out in his cornfield, Ray hears a voice which tells him “If you build it, he will come”. For once in his life, Ray chooses to follow his dreams and does something truly extraordinary. He ploughs under his corn and builds a baseball field on his land.

The film explores how sometimes in life you should take a risk and follow the road less travelled, even if others think you have lost your mind. Its message is that you should believe in yourself and follow your dreams – you never know where they will lead and what you will find.

You can see what the other Vada film writers chose as their Film of the Week here:
http://vadamagazine.com/17/03/2014/vadafilm/film-week-2
Collapse