This feature was first published in Vada Magazine here:
http://vadamagazine.com/07/03/2014/arts/red-velvet-review

Red Velvet, currently playing at the Tricycle Theatre, London, before transferring to Broadway, is a new play by Lolita Chakrabarti, starring Adrian Lester, which tells the true but forgotten story of Ira Aldridge, a young African-American actor who played Othello on the London stage in 1833. How the company, the audience and the critics respond is the crux of the play. 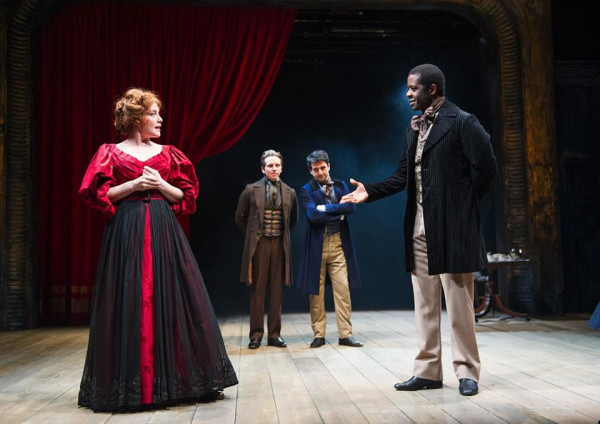 Red Velvet is a new play by Lolita Chakrabarti. It tells the true but forgotten story of Ira Aldridge, a young African-American actor who played Othello on the London stage in 1833.

Red Velvet creates imagined experiences based on the little-known, but true, story of Ira Aldridge, an African-American actor who, in the 19th century, built an incredible reputation on the stages of London and Europe.

The play examines and analyses the hot topics of race and racism in the Victorian era by exploring aspects of Ira Aldridge’s life story. This makes the play’s subject matter and politics engaging and accessible to all.

Red Velvet focuses on a key moment in Aldridge’s theatrical career. It looks at how and why he came to play Othello on the London stage in 1833, the audience and the critics’ reaction to his performance, and why Aldridge subsequently went into “exile” touring around European theatres but never returning to the London stage.

The play is bookended by opening and closing scenes where we see Aldridge in 1867 in Lodz, Poland, the year and place of his death, as he tours his Shakespeare productions around Europe’s regional and fringe theatres.

In 1833, at the Theatre Royal in Covent Garden, Edmund Kean, the greatest actor of his generation, collapsed on stage whilst playing Othello. Charles Kean, his son, who had been playing Iago opposite his father, expected to take over the title role. But Pierre Laporte, the theatre manager, took a risk and cast his friend Ira Aldridge, an African-American actor, as Othello. How the company, the audience and the critics respond is the crux of this play.

The historical context of the play is all-important. This was a time when slavery was abolished and the French Revolution was still fresh in people’s minds. It was a time of revolution and change, when ordinary people, including women and Black people, were rising up and challenging the Establishment and demanding their rights and equality. The Establishment wanted to hold on to power and maintain the status quo. They did not want change.

In the play, this clash between the old and the new, the Establishment and the revolutionaries, is played out on a London stage, when the French theatre manager, Laporte, takes a risk and casts Aldridge, an African-American actor, as Othello rather than Edmund Kean’s son, Charles, which is what everyone was expecting. And we, the audience, are witnesses to the fall-out and the aftermath of this theatrical revolution.

The play and the production is excellent at conveying Victorian Britain/London – its attitudes, its prejudices and its mindset. When Aldridge is first introduced to the company, many of the actors are visibly shocked and shaken by the thought of an African-American playing Othello; they fear their production will be seen as a “freak show” or a “curiosity” and that it will not be taken seriously. The theatre reviews of Aldridge’s performance are truly shocking to a modern-day audience but are very revealing of the commonplace bigotry, prejudice and racism prevalent in Victorian London and Britain, the beating heart of the British Empire.

There is a very powerful and moving scene between Aldridge and Laporte in the second half. They talk about acting as an “Art” and theatre being a political act, which it often is. They had planned a theatrical revolution. Laporte had warned Aldridge to tread carefully to start with, to allow the audience time to acclimatize and adjust. But Aldridge had played hard and fast from the beginning, giving full expression to the anger and passion of The Moor. The charged and passionate scenes, between a black man and a white woman, prove too much for Victorian sensibilities. Both men argue their corner with true passion and conviction and, in the heat of the moment, even Laporte’s latent racism surfaces when he claims Aldridge’s “true nature” had surfaced by playing Othello in the style and manner in which he did. Hearing such a comment from someone Aldridge considered to be a good friend must cut like a knife.

What gives this play and this production an extra edge is the energy and the passion brought onto the stage by the excellent ensemble cast. The piece was acted with total commitment by all the actors, and all the performances felt very heartfelt. The actors really made me care about the people in the story.

There is an outstanding central performance from Adrian Lester playing Ira Aldridge, who truly lives and breathes the part. He is ably supported by an excellent ensemble cast, with all the actors giving very strong performances, but special mention has to be given to Eugene O’Hare playing Pierre Laporte, Rachel Finnegan playing Halina/Betty Lovell/Margaret Aldridge and Natasha Gordon playing Connie.

In summary, I thought this production was outstanding, due to the quality of the writing and the ensemble acting. It took my breath away and I was mesmerized from start to finish. Race and racism are hot topics in modern-day Britain, and the subject matter and the themes of the play remain relevant and pertinent today. Finally, the play made me think, and that is what I go to the theatre for. Beg, borrow and steal to get a ticket and see the show!

Red Velvet first played at the Tricycle Theatre in 2012 to sold-out houses and widespread critical and public acclaim. It has returned to the Tricycle for a limited run prior to its Broadway (New York) transfer.

Red Velvet plays at the Tricycle Theatre until 15 March 2014 and then transfers to Broadway (New York).

Follow the link below to the Tricycle Theatre website for all the details about Red Velvet:
http://www.tricycle.co.uk/current-programme-pages/theatre/theatre-programme-main/red-velvet/
Collapse