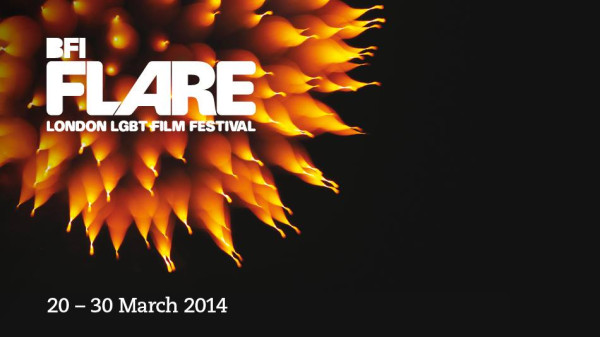 This feature was first published in Vada Magazine here:
http://vadamagazine.com/28/02/2014/vadafilm/bfi-flare-lgbt

My preview of the BFI's London LGBT Film Festival, expanded and rebranded this year with a new identity - BFI Flare. It runs from 20 to 30 March.

This week I am previewing the BFI London LGBT Film Festival, now in its 28th year, which runs from 20th – 30th March. This year the Festival has been expanded and rebranded with a new identity – BFI Flare.

Connoting the light of a cinema projector and also a beacon, ‘Flare’ suggests the spark of an idea, moving forward and growing outward. It is inclusive and welcoming to all audiences.
- BFI Flare Festival Programme, 2014

I have been going to the BFI London Lesbian and Gay Film Festival (as was) for the past few years and it introduced me to the range, depth and sheer diversity of LGBT cinema from around the world. The festival gives me an opportunity to see a wide range of LGBT films that I would not get the chance to see otherwise.

This year the Festival has three strands:
- Hearts, films about love, romance and friendship;
- Bodies, stories of sex, identity and transformation; and
- Minds, reflections on art, politics and community.

It is very difficult to choose a few films to highlight from such a wide-ranging and diverse programme but I have chosen to focus on the Opening and Closing Night Gala films and others which I have booked to see. This makes for a very personal selection.

The Opening Night Gala Film is Lilting, written and directed by Hong Khaou, and starring Ben Whishaw, Cheng Pei Pei and Andrew Leung. Staggering from loss after the recent death of his lover Kai (Leung), Richard (Whishaw) reaches out to Kai’s mother Junn (Pei Pei), a Chinese-Cambodian woman, whom Kai had never come out to. An intimate portrait of two strangers brought together by the common language of grief. This is a new British film and this will be its European Premiere.

The Closing Night Gala Film is 52 Tuesdays, directed by Sophie Hyde, and starring Tilda Cobham-Hervey and Del Herbert-Jane. The film tells the story of a teenage daughter, Billie, struggling with her mother’s transition from female (Jane) to male (James). James and Billie see each other every Tuesday and the film was shot consecutively over a year of real-life Tuesdays. Sophie Hyde won a best director award at Sundance for this film.

I have booked to see five films as part of BFI Flare, all of which I am very excited about seeing. I am featuring them to give Vada readers a flavour of the richness and diversity of the films on offer:

Test is set in San Francisco in 1985 and is written and directed by Chris Mason Johnson. Frankie is a young gay performer in a modern dance troupe grappling with the pleasures and pain of promiscuity and the desire for a relationship. When the chance to take the first test for HIV comes along, it brings with it a host of issues.

Will You Dance With Me? is directed by Derek Jarman. In September 1984 Derek Jarman spent an evening in a London gay nightclub as an experiment in filming dancing for Ron Peck’s feature film Empire State. The film captures the atmosphere of a night at Benjy’s and Jarman’s camerawork offers a raw experience of cruising around a gay club.

Bridegroom is a heartbreaking documentary about a young love cut tragically short. Inspired by a YouTube video posted by Tom Bridegroom’s grieving partner Shane Bitney Crone, Bridegroom is the story of Tom and Shane’s love and the aftermath of Tom’s death. It tells how two young men from different small towns in America met, fell in love, and found the courage to come out to their families and make a life together. But when Tom died, Shane found he had no legal recourse to fight Tom’s parents who barred him from the funeral. The film makes a strong case for Equal Marriage.

Kill Your Darlings is the story of the Beat Generation and stars Daniel Radcliffe as the young poet Allen Ginsberg. The film follows Ginsberg as he navigates his way through freshman year at Columbia in 1944, focusing on his burgeoning friendships with William Burroughs and Jack Kerouac, and his increasingly toxic relationship with Lucien Carr.

Valentine Road is an important documentary about the life of a queer youth cut tragically short. In 2008 Larry King, a young queer high school student in California, was shot twice in the back of the head by his classmate Brandon McInerney and died two days later in hospital. The documentary explores the lives of the victim and his murderer to try and uncover what really happened. What emerges is a tale of shattered lives, a community torn apart by prejudice, and a young bullied boy who never got the opportunity to know “it gets better”.

Finally, there are a number of events taking place as part of BFI Flare including talks, club nights and exhibitions and I wanted to highlight a couple of these in order to give readers a flavour for the events happening around the Festival.

On Monday 24 March, Stephen Beresford talks Pride. Writer Stephen Beresford will be in conversation with Brian Robinson on writing the screenplay for Pride. Pride is a bittersweet comedy based on the true story of how a group of gay activists came together in 1984 to support the striking miners. The film stars Bill Nighy, Imelda Staunton, Dominic West, Andrew Scott and Paddy Considine. You can find out how this fascinating piece of gay history has been turned into a heart-warming, uplifting and very funny film.

On Sunday 30 March, the BFI will host The Abominable Laws – Homophobia across the globe, a round table discussion about the state of LGBT rights around the world. Seventy-six countries worldwide outlaw homosexuality, with seven of those countries carrying the death penalty if found guilty of a same-sex act. Some countries will imprison you for life while others will just take away 14 years of it for being who you are and daring to love whom you want. Many of these laws used against lesbians, gay men and bisexuals also apply to trans people as well. While in the west we’re securing victories for equal marriage and adoption rights for LGBT people, across the globe the story is depressingly different. The BFI will host a round table discussion about these issues with filmmakers, film programmers and activists from some of the countries affected by these unjust laws to help keep the debate about global LGBT rights alive.

If you are based in and around London, I would recommend you sample the expanded and rebranded BFI Flare: London LGBT Film Festival this year. There really is something for everyone!

BFI Flare Official Website, where you can browse the programme and book tickets:
http://www.bfi.org.uk/flare
Collapse