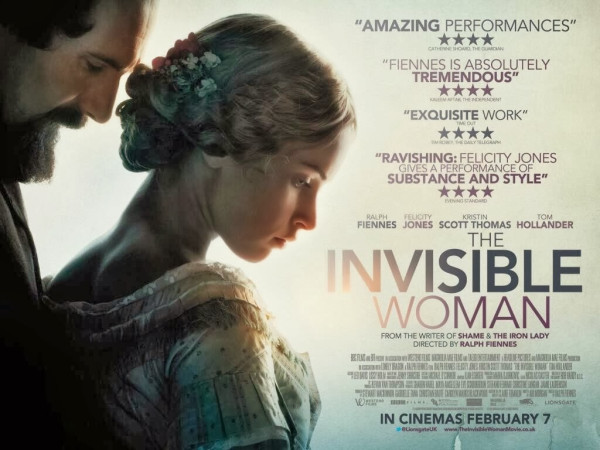 This feature was first published in Vada Magazine here:
http://vadamagazine.com/21/02/2014/vadafilm/invisible-woman-review

The Invisible Woman is about the "secret" love affair between Charles Dickens and Nelly Ternan. It is directed by, and stars, Ralph Fiennes.

The film focuses on the affair between Dickens and Ternan and so only covers a segment of Dickens’s life. Dickens meets Ternan when he is an actor-manager and Ternan is a young actress who steps in at the last minute to cover for another actress. She is intelligent and beautiful, an avid reader of Dickens and a fan of his work, and many years his junior.

Fiennes portrays Dickens as a larger-than-life character, the life and soul of the party, the bright Sun around whom everyone else revolves. But although Dickens is very successful in his work, his personal life is lacking, because he is stuck in a lonely and loveless marriage with a wife he cannot open up to and who has little understanding of him or his work.

The film opens and closes with Ternan, not Dickens, and the film focuses on Ternan’s recollections of her time with Dickens. The film as a whole is very strong on women – in terms of the range and depth of characters portrayed, in giving women a voice and telling their stories, and in showing how difficult it was for women to make their way independently in Victorian Britain.

There are three very strong performances by actresses in this film; all three giving real depth to their characters and ensuring that you empathize with them and their particular story. Felicity Jones plays the young Nelly Ternan, Dickens’s lover; Kristin Scott Thomas plays Catherine Ternan, Nelly’s mother; and Joanna Scanlan plays Catherine Dickens, Dickens’s estranged wife.

A very powerful scene in the film is when Catherine Dickens, the estranged wife, meets Nelly Ternan, the lover, in very unusual circumstances (to reveal the circumstances would be a spoiler!). As a viewer, you sympathize with both women, and your heart goes out to them both for the very difficult situation they find themselves in.

I loved the fact that this film gave us, the audience, an in-depth portrait of Charles Dickens the man, not the legend. The film shows Dickens as someone who was a huge success professionally, a Victorian “celebrity”, someone who liked putting on a show. However, most human beings also crave companionship, someone they can share their lives with. This film is the story of Dickens meeting Ternan; finding affection, understanding and love; the inner turmoil and struggle this brings them; and the repercussions for Dickens, his family, and for Ternan.

A key theme of the film is Victorian values and morality, and how they impacted on the daily lives and life choices of men and women living in the Victorian era. Charles Dickens, married with children, cannot leave or divorce his wife without losing his reputation. Nelly Ternan does not wish to be a mistress/kept woman but has no hope of marrying Charles Dickens whilst his wife is still alive. And Catherine Dickens has no choice but to stay with her husband, even when she knows he is being unfaithful to her and wants to leave her for another woman. They are all victims of Victorian values and they all suffer as a result.

The film is excellent at portraying the real Victorian Britain. This means not just the glitz and glamour, but also the very real poverty and hardship which Dickens’s personally experienced in his childhood and which were part and parcel of everyday life in Victorian Britain.

In summary, a real-life Victorian love story, of a secret love affair between one of Britain’s most celebrated writers and a young actress, showing the far-reaching consequences for all involved. A film that privileges women, portraying strong women, empowering them with a voice, telling their stories, and revealing the many challenges they faced in Victorian society. A film highlighting the impact of Victorian values and morality on people’s daily lives and life choices. Recommended.

The Invisible Woman has been out in cinemas across London since 7 February and was released nationwide across the UK on 21 February.