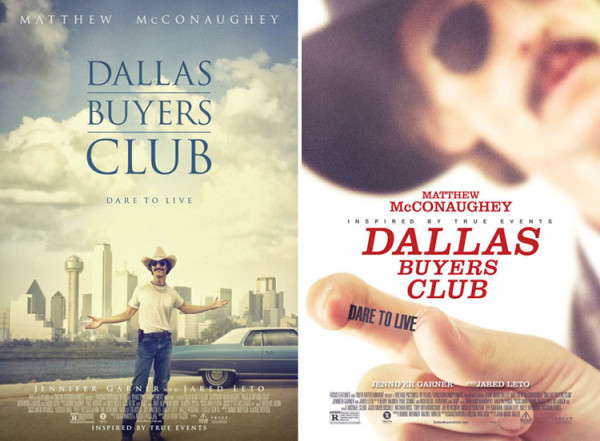 This feature was first published in Vada Magazine here:
http://vadamagazine.com/14/02/2014/vadafilm/dallas-buyers-club-review

The film Dallas Buyers Club is based on the true story of Ron Woodroof. Diagnosed with AIDS in 1985 and given just 30 days to live, Ron Woodroof fights back. An incredible film with a powerful story that deserves to be told. Although it is only February, Dallas Buyers Club will definitely make my list of best films of 2014.

The film Dallas Buyers Club is based on the true story of Ron Woodroof, who was diagnosed with AIDS in 1985 and given just 30 days to live. The film documents his fight for life and how he managed to help himself and fellow AIDS sufferers live longer by establishing the “Dallas Buyers Club”.

Ron Woodroof is a larger than life character – self-assured, confident and cocky; a redneck Texan with a passion for life. At the start of the film, we see him working as an electrician and a rodeo cowboy, and we see first-hand his love for drink, drugs, and women. But a chance visit to the hospital, and the news that he receives there, changes his life forever.

In one of the opening scenes, Woodroof is informed of his AIDS diagnosis in the most brutal way imaginable. The doctors march into Woodroof’s cubicle, wearing face masks, and casually inform him they have run some blood tests, he has AIDS, and he should put his affairs in order as he only has 30 days to live. Very little tact is shown, no care or support is offered, and Woodroof is simply told he is going to die.

Unsurprisingly, Woodroof greets the news with total disbelief; as far as he is concerned only queers and gays get AIDS and he is no “faggot”. He is convinced there has been a mix-up with the blood tests at the lab, and walks out of the hospital telling the doctors what they can do with their prognosis as nothing is going to kill Ron Woodroof in 30 days. Woodroof’s fight for life, and his contempt for the medical establishment, starts on day one.

In the mid-80s the only drug used to treat AIDS patients was AZT and it was still in trials. If you were lucky you were chosen to be part of the trials (a chance to actively participate in finding a “cure”), although you would not know whether you were receiving AZT or a placebo. AZT was the only game in town, and whilst some patients benefitted from AZT, it was highly toxic and many patients simply could not tolerate the drug.

Woodroof is not on the AZT trials but manages to obtain supplies of AZT on the black market. But it becomes harder and harder to get hold of it, and Woodroof eventually suffers a bad reaction to the drug.

Following Woodroof’s AIDS diagnosis his old “friends” (drinking buddies) fall away and he is cast out of his home and his community by a notice to vacate. At a stroke, someone who is used to being very popular, the life and soul of any party, becomes ostracized and a total outcast.

Unable to get any more AZT, and driven out of his home, Woodroof heads to Mexico to try and source some more of the drug. There he meets a doctor who is able to offer alternative “unapproved” treatments and medications and Woodroof’s health improves. That is when Woodroof gets the idea that there is money to be made, and hope to be given, by importing these unapproved drugs into the US and selling them directly to his fellow AIDS sufferers.

The Dallas Buyers Club is born, where AIDS patients buy membership to the Club and, in exchange, they receive a supply of the unapproved drugs they need to give them a chance to live. The Dallas Buyers Club is not a charity – you only get the drugs if you can pay the membership fee which is $400 a month. Woodroof teams up with Rayon, a transgender woman he met at the hospital, as his business partner, because whilst Woodroof can supply the drugs, he needs Rayon and her contacts within the LGBT community to supply the Club members. Together, they make a successful team.

As the Dallas Buyers Club grows and flourishes, and as the members appear to stay alive for longer and remain in good health on their unapproved drugs, the authorities grow suspicious, and battles with the drug companies, the FDA and the medical establishment commence. AZT is big business for the drugs companies and the medical establishment and they are keen to protect the status quo and their vested interests. They try and ensure Woodroof’s access to alternative drugs is completely cut off.

I appreciated the change in Woodroof’s attitude towards the LGBT community over the course of the film. At the start of the film Woodroof is very homophobic but, as he builds and develops close bonds with the LGBT community over the course of the film, founded on their shared experience of AIDS, his attitudes change. The culmination of this change in Woodroof is brought out in the supermarket scene where Woodroof stands up for Rayon against one of his former friends and drinking buddies, demanding that his old friend show Rayon the respect she deserves. The film proved that it was perfectly possible for people, and their attitudes, to change over time.

The film is inspiring because it shows how resilient human beings are in the face of extreme adversity. Woodroof was not prepared to accept the death sentence handed down to him by his doctors. He took matters into his own hands and became an informed patient, knowing as much about his condition, and how to treat it, as his doctors. It shows how strong the desire to live is in some people and how hard they will fight to survive. Woodroof, originally given a mere 30 days to live, survived for 7 years before finally succumbing to AIDS.

One of the questions posed by the film is … who and what was Woodroof and what does he represent to you? Was he a hero and a good Samaritan, who managed to successfully prolong his own life and the lives of many fellow AIDS sufferers, by educating himself and others on alternative drugs for AIDS? Was he a businessman who saw a way to make a quick buck out of conning people, desperate for help, into buying drugs which were not clinically effective or proven? Was he no more than a drug dealer, buying and selling unapproved and unauthorized drugs with no known or proven clinical efficacy, at inflated prices for a profit? All of these are equally legitimate ways of looking at Woodroof and his activities.

Matthew McConaughey’s performance as Ron Woodroof is mind-blowing and if there is any justice in the world he should win the Oscar for Best Actor for his performance in this role. He truly embodies the personality and character of Woodroof – a self-assured, confident, cocky, redneck Texan, with a passion for life and a total disregard for authority. The physical transformation McConaughey has effected for the role is astounding – he is barely recognizable, appearing much older and thinner. For the film to work, Woodroof has to be a larger than life character, someone who can enthrall the audience, and someone who can win them over, capturing their hearts and their sympathy. McConaughey delivers all of this in the performance that he gives.

Leaving aside whether Jared Leto should have been cast in this role (which is a separate issue), Leto does deliver a very strong supporting performance as Rayon, a fellow AIDS sufferer and Woodroof’s business partner. Jennifer Garner, playing Dr Eve Saks, a doctor overseeing the treatment of both Woodroof and Rayon, also delivers a very strong performance that deserves recognition. Both Rayon and Dr Saks are fictional characters, based on an amalgam of people rather than on one particular individual.

Dallas Buyers Club has been nominated for six Oscars, including Best Picture, Best Original Screenplay, Best Actor (McConaughey) and Best Supporting Actor (Leto), and it deserves all of its nominations. Although it is only February, I can confidently say that Dallas Buyers Club will undoubtedly be one of the best films I will have the privilege of seeing and reviewing this year.

An informative and educational film, that is moving and powerful, gripping and thrilling, and concerned with matters of life and death. It is an important story which I did not know and that deserves to be told. A rare film that enriches the mind, body and soul, and will definitely make my list of best films of 2014.

Dallas Buyers Club is currently out in cinemas across the UK.