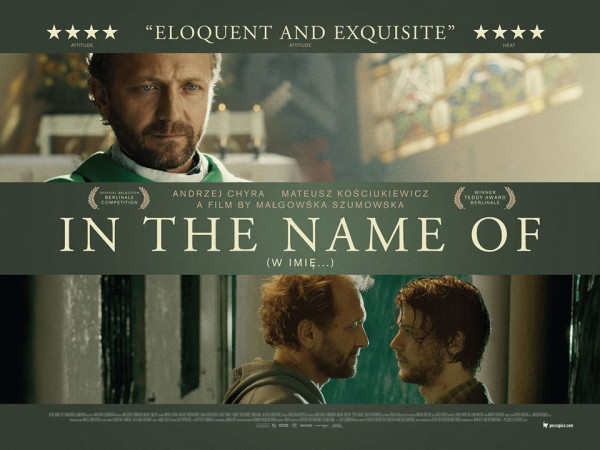 This feature was first published in Vada Magazine here:
http://vadamagazine.com/07/02/2014/vadafilm/name-review

In The Name Of is a Polish film which explores the human need for love and a Catholic priest's own personal battle with sexual desire.

In The Name Of – Review

In The Name Of is an ambitious Polish film looking at faith, Catholicism and sexuality. It explores the very real human need/desire for love and a Catholic priest’s own personal battle with sexual desire.

The film centres on Father Adam (Andrzej Chyra), a Catholic priest who has been transferred to a remote rural village, where he runs a reform centre for young men who are young offenders. His mission is to help them turn their lives around and show them a better path.

Father Adam is a good person, trying to do a good job, but he’s haunted by his own demons and has his own cross to bear. He runs regularly, seeing it both as a penance and as a form of prayer. Lucasz (Mateusz Kosciukiewicz), nicknamed “Humpty”, is a new arrival at the reform centre with a deeply troubled past. Over a period of time, Father Adam and Lucasz grow close.

The film is very much about the human being inside the priest’s cassock. Priests are only human, and are flawed and fallible like the rest of us. They are tempted like all human beings, and struggle just as much as everyone else to follow the right path and do the right thing.

Many priests crave love, tenderness and companionship like other human beings, but the celibacy required of a Catholic priest means that these things are denied. This can lead to a great deal of inner conflict, turmoil and suffering, as is the case with Father Adam. Catholic priests are required to be celibate and so this is very much the story of a Catholic priest’s own personal battle with sexual desire.

The film hints at how difficult issues and problems within the Catholic Church lie hidden or are swept under the carpet rather than being dealt with head-on. Transferring a priest is the easy option but it merely stores up more trouble for the future.

The themes tackled by the film are interesting ones, but I felt it was let down by weak characterisation. You hear that Father Adam has “a bright flame of faith and a gift to do amazing things” but you see little evidence of either. The young men at the reform centre are not differentiated enough – you never see or hear their stories. They are not individuals, who you get to know and care about; they are just a group of young men.

The most powerful scene in the film by far is one in which Father Adam Skype’s his sister overseas. He opens his heart to her. He reveals his innermost thoughts and feelings; his desires; his doubts, his fears and his frustrations. Father Adam comes out to his sister, although she is not ready to listen or to take on board what he is telling her. This one scene gives you a real insight into the innermost reaches of Father Adam’s soul and I wish the film contained more scenes of similar sensitivity and depth.

Father Adam has a duty of care towards the young men in his reform centre because he is the responsible adult. The film does not seem to acknowledge, recognise or appreciate the special responsibility he bears, and I found this troubling and problematic. Additionally, the “surprise”/reveal ending did not ring true for me. It was unlikely, improbable and unbelievable.

Ultimately, I was left disappointed by this film. I felt the characterisation was weak – the young men were not portrayed as individuals, only as a group; and even Father Adam’s character was only sketched in. The film skimmed its subject matter superficially rather than exploring it in any real depth. A real shame because this is a complex and interesting topic that could have made for a fascinating film.

In The Name Of is a Polish film, directed by Malgoska Szumowska (who also co-wrote the film) and is released on DVD in the UK on Monday 10th February.