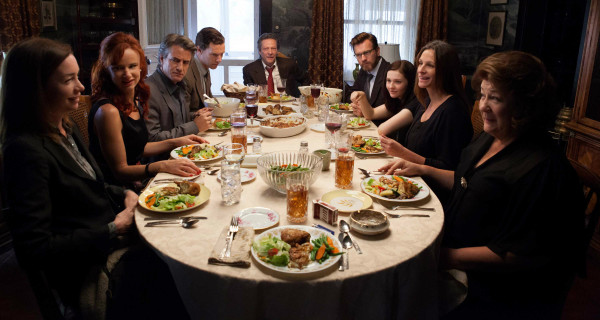 This feature was first published in Vada Magazine here:
http://vadamagazine.com/31/01/2014/vadafilm/august-osage-county-review

August: Osage County is a film with a stellar ensemble cast that looks at a family in crisis and unearths its dark secrets.

One of the reasons I LOVED this film was it focused on women, older and middle-aged women, real women with real "lived" experience, and told their stories - HERstory not HIStory!

For me, August: Osage County was THE best film I had seen in the past 12 months and, if it was up to me, I would award it the Oscar for Best Film.

August: Osage County is a mainstream Hollywood film, written by Tracy Letts, based on his own Pulitzer Prize-winning play of the same name. I have not seen or read the play but I was very excited about seeing the film because of its excellent ensemble cast, including Meryl Streep, Julia Roberts, Ewan McGregor, Juliette Lewis and Benedict Cumberbatch. The film more than lived up to my expectations and did not disappoint in the slightest.

What I loved about this film was it focused on the female characters and on telling their stories. Over the course of the film you get to know three generations of women in this family – the older sisters, Violet and Mattie Fae; Violet’s three middle-aged daughters, Barbara, Karen and Ivy; and Barbara’s teenage daughter, Jean. I really valued the fact that the film focused on older and middle-aged women, women with real lived experiences, and told their stories.

And what a bunch of women! All the women are strong-willed, independent, confident and … damaged. We, the audience, get to know, understand and appreciate their strengths and weaknesses, and why they think and behave in the way that they do. As all of the characters have light and shade – good and bad – within them, they felt very real to me. The film shows women in all their diversity and complexity, and shines a light on some of the darkness within. This is very rare in a mainstream Hollywood film and is to be commended. 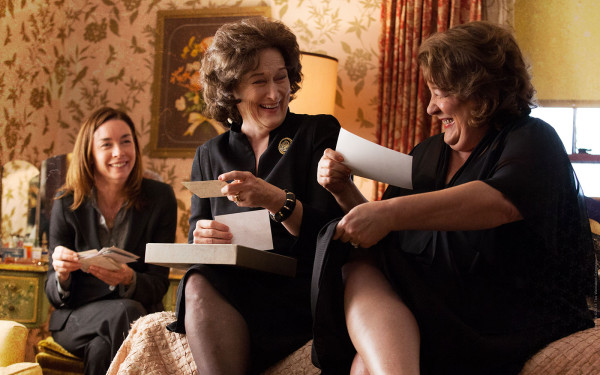 August: Osage County is a film that takes an in-depth look at one particular family, and all of its constituent elements, in a time of crisis. At the beginning of the film Beverly Weston, Violet’s husband, and the father of Barbara, Karen and Ivy, goes missing and the family comes together to support Violet. Beverly is subsequently found drowned and the film follows his funeral and its aftermath.

A key theme in the film is “secrets”, held by individual family members and kept hidden from the rest of family. These secrets are very important aspects of people’s lives and yet, for whatever reason, individual family members have felt unable to share their news with the rest of the family. Barbara has separated from her husband; Karen is engaged to be married; Ivy has battled with cancer and is seeing someone; and there is a big reveal towards the end of the film, a secret kept under lock and key by the older family members, which changes everything. It is sad but true that the people you most want to share your news with, your family, are often the most difficult to open up to. Families do have secrets, which often only emerge in times of crisis.

The inter-generational tensions felt very real too. Violet very passionately describes in her “truth-telling” dinner what poverty and hardships her generation endured and suffered as children. For Violet, her daughters have had it easy, and yet have squandered all the opportunities she and her husband worked so hard to provide. This feeling that the older generation made great sacrifices for their children who have failed to live up to those expectations, and wasted the life chances handed to them on a plate, is one that is commonly felt and expressed within families.

One of the most moving scenes is when Violet tells her three daughters a story from her childhood about a pair of cowboy boots that she had her heart set on. It is a story that tells you all you need to know about Violet’s mother and it explains a great deal about why Violet speaks and behaves in the way that she does. It is a story that will break your heart.

Violet, played by Meryl Streep, is the central character around which the film revolves. She is outspoken, strong-willed and independent, she has steel running through her veins, but we encounter her at a time of crisis, when she is in pain and suffering from cancer, and where she has, yet again, become a drug addict, addicted to, and dependent on, painkillers and prescription drugs. To cap it all off, her husband goes missing and is subsequently found drowned. Streep gives a very powerful performance, of a strong matriarch, who is disintegrating and falling apart, although she will not admit that to anyone, least of all her family. She wants and needs help and support but she is too proud to ask for it or accept it. The only path open to her is to struggle on, alone, and to try and manage on her own. I admired her for her resilience, her inner strength and her courage. She is a real fighter.

The film is titled August: Osage County and both the time and the place have an important role to play in the film. The time is August, it is stiflingly hot and the heat is referenced throughout the film. The heat reflects the oppressive pressure cooker atmosphere within the household, as tensions build and tempers fray. The place is Osage County and the film highlights the open plains and the empty spaces of Oklahoma which should represent freedom – of mind and spirit. Violet and Beverly’s house lies in the midst of the open plains, emphasizing how isolated the house is, and how lonely it can feel living there. Despite being surrounded by open plains, there is nowhere to run to and nowhere to hide – there is no escape.

Whilst the film is dark, complex and serious, it is threaded right the way through with humour. Violet has a very sharp tongue and she can be very cruel, but she also has the wittiest lines, and her sarcastic observations on her daughters, her family, and life in general, are very funny. This makes what could be a very dark film much more palatable.

The film’s soundtrack is key and music in general is used very effectively at strategic points throughout the film. I enjoyed the country music tracks and felt the music helped the audience understand and empathize with a character. A snatch of music can also convey the essence of a character in under a minute, for example Steve blaring out “Livin’ la Vida Loca” whilst racing along in his red sportscar.

Whilst it is Meryl Streep and Julia Roberts who have been nominated for the key awards, including the Oscars, as best actress and best supporting actress respectively, this is very much an ensemble piece and there are no weak links. The entire cast give very strong performances, but the female actors deserve a special mention because they all give remarkable and convincing performances in their respective roles. The ensemble cast were the reason I wanted to see the film and they are the reason I loved it.

In summary, a dark, intelligent, and thought-provoking drama, with an excellent ensemble cast giving very powerful performances. A meditation and a reflection on the diversity and complexity of women, relationships and families. One that made me hold a mirror up to myself, and my relationship with my own family, and examine the good and the bad interactions I have with them, and what lies beneath. A film that engaged my heart and my mind. Highly recommended.

August: Osage County is now playing in cinemas across the UK.