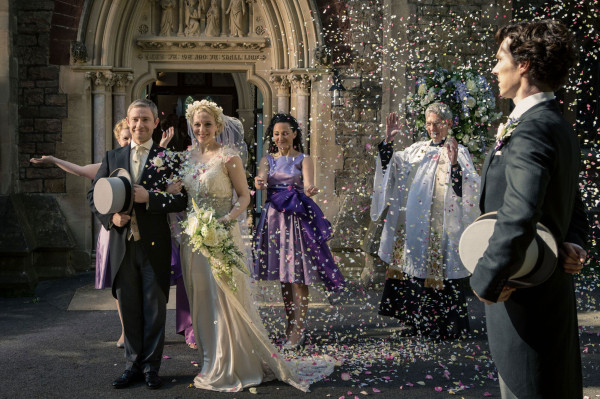 John is getting married, Sherlock is the Best Man, but will a murder cloud John’s big day?

My review of "The Sign of Three", the second episode in Sherlock Series 3, was first published on Vada Magazine here:
http://vadamagazine.com/08/01/2014/entertainment/sherlock-sign-three-review

“The Sign of Three”, episode 2 of Sherlock Series 3, was eagerly anticipated by Sherlock fans. This was the episode where John was marrying Mary, with Sherlock as Best Man, and we were all invited to the wedding to share in John’s big day. As this was Sherlock, we knew things were unlikely to go to plan, and murder, mystery and mayhem were likely to ensue. What a thrilling prospect! One of the underlying themes of the episode is the friendship between Sherlock and John, their work together, and whether this will change now that John is a married man with changed priorities.

This episode is the one episode in the whole of Sherlock where both Sherlock and John give the clearest indications of how deep their friendship runs and how much they mean to eachother. Weddings make everyone emotional and this wedding is no exception!

I loved the way Sherlock is so protective of John. This comes out beautifully in the scene where he meets David, one of Mary’s ex-boyfriends, and an usher, before the wedding and warns him off being too friendly with Mary, downgrading him from friend to “casual acquaintance” only permitted to see Mary three times a year and “always in John’s presence”!

John comes clean about his feelings for Sherlock when he asks him to be his Best Man. John describes Mary and Sherlock as “the two people that I love and care about most in the world”, and he asks Sherlock to be his Best Man because Sherlock is his best friend. This revelation takes Sherlock completely by surprise, “I never expected to be anybody’s best friend” he says during his Best Man’s speech.

The biggest shock to the system is Sherlock revealing what he truly thinks of John, describing him as the “bravest and kindest and wisest human being I have ever had the good fortune of knowing”. This neatly echoes both what John said about Sherlock in “The Empty Hearse” that Sherlock was “the best and the wisest man that I have ever known”, and what Dr Watson wrote about Holmes in the canon story “The Final Problem” that Holmes was “the best and the wisest man whom I have ever known”.

We saw more of Mary this episode and I liked what I saw! In the midst of the wedding planning, she packs Sherlock and John off on a case because she wants to show them (especially Sherlock) that she has no intention of breaking up their friendship and she is happy for them to continue fighting crime together.

One of the congratulatory wedding telegrams read out by Sherlock is from “CAM”. When Mary hears the name, she appears nervous, upset and shaken. My guess is that the telegram is from Charles Augustus Magnussen, the new Sherlock villain. This is our first inkling that the blackmailer (if the Sherlock writers stay true to the canon character Charles Augustus Milverton) may have a hold over Mary and she may have a skeleton in the closet. Intriguing!

When Sherlock tells John that Major Sholto is going to be murdered and runs off, John follows, telling Mary to stay where she is. However Mary’s instincts are to join them and she sets off in hot pursuit. She is someone who loves the thrill of the chase as much as John – good for her! Mary is the one who remembers Major Sholto’s room number; Sherlock having deleted that information from his brain. And we see a new dynamic in the scene outside Major Sholto’s door, because Mary speaks sense, Sherlock barks at John to “get your wife under control”, but John backs Mary “she’s right”. Sherlock is not used to someone else being right or John backing someone else over him –quite a shock to the system!

By the end of this episode we see a Mary who is confident enough not to be threatened by John and Sherlock’s friendship and partnership; who is intelligent, resourceful and independent; and who can stand her ground and hold her own, even against Sherlock. She is also someone who may have a dark secret. All in all, she is a great new addition to the Sherlock family!

There was a very subtle change in the way the mystery was solved in this episode. Mycroft had already suggested to Sherlock that, with John getting married, it was “the end of an era” (ie Sherlock and John’s partnership) and things would change. Mycroft expects to be seeing a lot more of Sherlock again “just like old times”. Mycroft’s prediction starts to come true. When Sherlock is puzzling through this mystery, whilst delivering the Best Man’s speech, thinking through who the victim will be and who the killer is, it is Mycroft who is there with him in his head, urging him on and prompting him, not John. This is the first episode where I have seen Sherlock and Mycroft working in partnership to solve a case (even though Mycroft is only present in Sherlock’s head!).

In my last review, I noted that every episode of Sherlock is packed with canonical references for Sherlockians to seek out and find. As before, I am going to cite a few examples and I have chosen the ones that gave me the greatest pleasure.

Holmes in the books is very proficient in the violin and this episode showcases Sherlock’s talent in that field. He composes a Waltz for John and Mary to dance to at the wedding and plays the piece at the wedding whilst they dance. It is his wedding gift to the happy couple. I also liked the short scene with Sherlock and John at Baker Street, Sherlock walking across the room with his mouth stuffed with cigarettes which he puts into a slipper. In the books, Holmes always stored his tobacco in his Persian slipper.

In “The Sign of the Four”, Jonathan Small is helped by a small native from the Andaman Islands called Tonga. It is Tonga who is the murderer, killing Bartholomew Sholto with a poisoned dart from a blowpipe. The case is cleverly referenced when Sherlock talks about “The Poison Giant” and we cut to a scene with Sherlock and John chasing a dwarf with a blowpipe across the rooftops of London.

Greg Lestrade’s solution to the mystery posed by Sherlock in “The Sign of Three” of the attempted murder of Private Bainbridge – a dwarf hiding in the air vent above the shower and shooting through the grating – is how the murder is committed in “The Sign of the Four”. Tonga is hiding in the attic and kills Bartholomew Sholto with a poisoned dart shot from his blowpipe. So Greg was right all along – he had just solved the wrong case!

One of my favourite passages in canon comes in “A Study in Scarlet” when Holmes explains to Dr Watson why you should not use up space in your brain storing useless information. “I consider that a man’s brain originally is like a little empty attic, and you have to stock it with such furniture as you choose. … Now the skilful workman is very careful indeed as to what he takes into his brain-attic. He will have nothing but the tools which may help him in doing his work, but of these he has a large assortment, and all in the most perfect order. … It is of the highest importance, therefore, not to have useless facts elbowing out the useful ones.” This is the reason that Sherlock has deleted Major Sholto’s room number from his brain – he thought that it was useless information. On this one occasion, however, he was wrong!

This episode was rich in comedy and humour and I loved these lighter moments. Highlights for me included Mycroft working out on a treadmill, Sherlock always getting Greg Lestrade’s first name wrong, Sherlock’s face when Molly mentions she is having “quite a lot of sex” with Tom, the stag night sequence, Sherlock calling Mrs Hudson “Hudders” when drunk, Sherlock and John playing the “Who am I?” party game, and a drunk Sherlock and John investigating a case which ends with Sherlock throwing up on the rug whilst admonishing the landlord not to “compromise the integrity” of the crime scene. Given Benedict Cumberbatch is a natural ginger, I also appreciated a throwaway remark from one of the young women dated by The Mayfly Man, “I like gingers” she says.

I loved the big reveal at the end of the episode explaining the title “The Sign of Three”. Sherlock last’s deduction in this episode is that Mary is pregnant and the evidence he presents appears conclusive. However, it would be very difficult for John to continue working with Sherlock on a regular basis if he became a father and, for that reason, I predict the baby will not survive. In the original stories, Mary Morstan died leaving John a widower whilst Holmes was away, so I am not sure whether Mary herself will survive the series.

The dancing has started; everyone has a dance partner (even the comics and sci-fi geek is dancing with the chief bridesmaid!); everyone except Sherlock. Sherlock leaves the wedding and strolls off into the night, alone. My heart really went out to him. Whilst John getting married may not have changed things between Sherlock and John, and the way they work together, a baby will change everything. Sherlock will probably be thinking that the glory days of them fighting crime together are over. Despite this, Sherlock is happy for John and Mary and this clearly shows that he really cares about John and has John’s best interests at heart.

I recalled Mrs Hudson’s conversation with Sherlock at the start of the episode where she talks about her best friend and chief bridesmaid, Margaret, who she barely saw after her wedding. “I remember she left early”, says Mr Hudson, “I mean who leaves a wedding early?”. Sherlock apparently!

I wanted to take this opportunity to make a recommendation. If you want to learn more about all of the cases mentioned in passing during this episode (including The Poison Giant, The Elephant in the Room and The Hollow Client), and if you want to get more out of the series in general, you can do no better than read John’s Blog. It is a great supplement to the series and is full of extra insights which will deepen your appreciation and understanding of Sherlock. Check it out!

Yet another great episode, which focuses on Sherlock and John, how much they mean to eachother, and why they make such a good team. And an intriguing lead-in to the third and final episode of Sherlock series 3 – what is Mary’s dark secret and what fate awaits her and her unborn child? Stay tuned!

Previously on Vada, I have previewed Sherlock Series 3 and reviewed The Empty Hearse.

My Sherlock spoiler-free preview of Series 3 giving you a tantalizing taste of what is in store is here:
http://mycroft-brolly.livejournal.com/418607.html
http://vadamagazine.com/06/12/2013/entertainment/sherlock-s3-preview