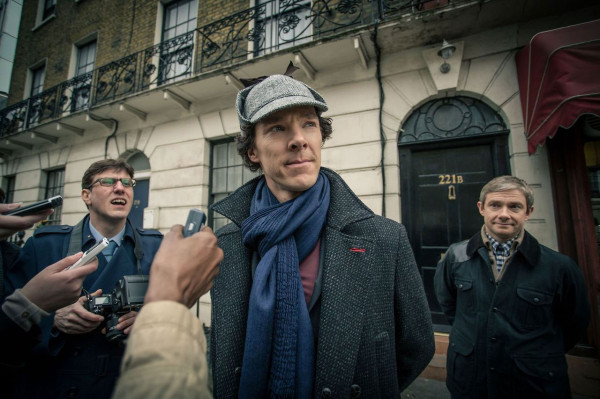 My review of "The Empty Hearse", the first episode in Sherlock Series 3, was first published on Vada Magazine here:
http://vadamagazine.com/04/01/2014/entertainment/sherlock-empty-hearse

Early in December I previewed Sherlock Series 3, and on New Year’s Day Sherlock returned to our TV screens after a two year hiatus. It was the best possible start to 2014 for me and my fellow Sherlockians.

“The Empty Hearse” contained not one, not two, but three “solutions” to how Sherlock survived The Fall – Anderson’s version which opens the episode, a fan’s version, and Sherlock’s real explanation. Ironically, I preferred the theoretical solutions to the real explanation! In Anderson’s version, I liked the Sherlock mask being grafted onto the dead Jim Moriarty’s face, Sherlock giving Molly a passionate kiss (even though this gave the game away that this was an imagined not a real solution), and the appearance of Derren Brown. But my favourite explanation was the fan version featuring Sherlock and Jim behaving like two naughty schoolboys, partners in crime, playing a trick on John, and ending in a gay kiss between Sherlock and Jim. 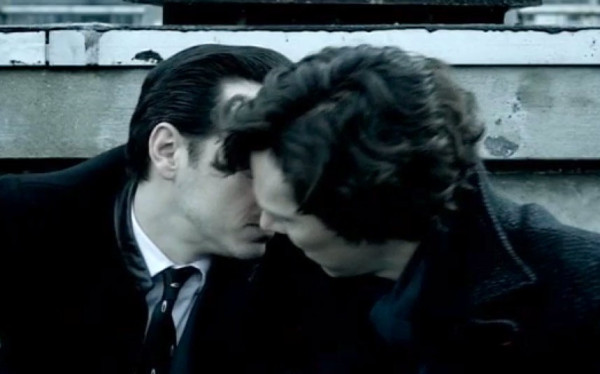 It was an absolute delight to see Andrew Scott reprising the role of Jim Moriarty and I loved the on-screen chemistry between Benedict Cumberbatch and Andrew Scott which came across so strongly in the scene. The theory was a perfect example of some of the most outlandish – but also the most fun – theories flooding the internet about how Sherlock survived The Fall in the two years Sherlock has been off the air. Next to these flights of fancy, Sherlock’s real explanation seemed very ordinary.

The beating heart of Sherlock, the TV series, is the relationship (both personal and professional) between Sherlock and John. Sherlock, having faked his own death, has been away from London for two years and has not been in touch with John during that time. As far as John is concerned, Sherlock is dead.

In Sherlock’s mind, he has no doubt that John will be overjoyed to see him return, just like in the original stories. Sherlock believes John has no life without him. Mycroft suggests that John may have moved on with his life and Sherlock tellingly retorts, “What life? I’ve been away”. Sherlock’s expectation is that John will be thrilled to see him return from the dead; his mind does not allow for any other possibility. He is in for a surprise!

In keeping with this incarnation, Sherlock does not adopt an elaborate disguise for his return, unlike in the original stories (of which more later). Sherlock is “hiding in plain sight” by becoming an anonymous French waiter – his only disguise is a bow tie, glasses and a moustache he has drawn on. As it turns out, Sherlock needn’t have bothered with a disguise as John is so focused on the marriage proposal he is about to make to Mary that he pays no attention to the waiter anyway. Sherlock’s grand entrance back into John’s life falls flat because John doesn’t even realize it is Sherlock, much to Sherlock’s disappointment and frustration. 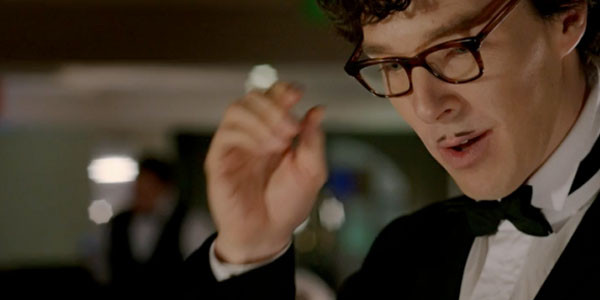 I predicted fireworks when Sherlock revealed to John that he had been alive all this time, and we – eventually! – got fireworks in the form of John physically assaulting Sherlock a number of times. John understandably feels angry, hurt and betrayed that Sherlock has not been able to trust him, his closest friend, with the knowledge that he faked his own death when so many other people knew, including Mycroft, Molly and several of Sherlock’s homeless network.

Ultimately what draws John back to Sherlock is their friendship, the fact they make an excellent team, and the sheer thrill of the chase. The episode nicely contrasts John’s normal mundane life as a family doctor with the adrenaline rush of working with Sherlock to uncover terrorist bombs and plots against London. Like most people, John would like some excitement and adventure in his life, and Sherlock provides this in spades.

The Holmes family has always intrigued me and I relish any insights into the family history of the Holmes brothers. One of my favourite scenes in this episode is the scene between Sherlock and Mycroft in the sitting room of 221B Baker St. At first it appears they are engaged in a battle of wits over a game of chess, “Your move” says Sherlock. They are in fact playing the board game “Operation” and Mycroft fails to remove the heart. “Can’t handle a broken heart. How very telling”, remarks Sherlock. It then emerges that during their childhood, Mycroft was the smart one, constantly reminding Sherlock, “Don’t be smart Sherlock, I’m the smart one”. Until they met other children, both the Holmes brothers thought Sherlock was an idiot. Just imagine!

The Holmes parents do not appear in any of the canon stories but, like most readers, I have always wondered what they would be like, having two such exceptional sons. “The Empty Hearse” shows us the Holmes parents and I was as surprised as John to find that they were, as John remarks, “just so ordinary”. “It’s a cross I have to bear”, retorts Sherlock. The short scene is perfectly played and depicts a classic parent-child relationship with the parents chattering on about domestic matters that hold no interest for Sherlock and Sherlock trying to terminate the visit as quickly as possible. It was a stroke of genius to have Sherlock’s parents played by Benedict Cumberbatch’s real-life parents, actors Timothy Carlton and Wanda Ventham.

I will doubtless have more to say about Mary, John’s fiancée, in future reviews; all I wanted to say about her in relation to this episode was that I liked her confidence – in herself and in their (John and Mary’s) relationship. When Sherlock turns up again in John’s life, in the middle of John’s marriage proposal to Mary, she is not jealous of the strong bond between Sherlock and John as others might be. Quite the reverse. “I like him” is Mary’s instant response to Sherlock and she encourages John to rekindle his friendship with Sherlock. Mary has John’s best interests at heart – she knows how much John has missed Sherlock and the vacuum Sherlock’s death has left in John’s life. This shows Mary’s love for John is genuine.

Like all Sherlockians, I love that each episode of Sherlock is packed with canonical references for us to seek out and find. This episode was no exception. I am going to cite a few of the obvious examples and the ones that gave me the greatest pleasure.

As I alluded to above, Holmes’s return in the canon story “The Empty House” is much more dramatic because he adopts a very elaborate disguise – that of an elderly bookseller. Watson literally bumps into the disguised Holmes at the scene of a crime and knocks down some of the books he is carrying including “The Origin of Tree Worship”. When the elderly bookseller calls round to Watson’s later, explaining he is a neighbour with a little bookshop on Church Street, one of the volumes he offers Watson to fill the gap in his bookshelves is “British Birds” (the feathered kind).

The scene is cleverly referenced when an elderly patient comes to see John in his surgery. The patient owns a shop on Church Street selling DVDs and magazines, and he has brought along some items that may interest John, including a Tree Worshippers DVD and a British Birds (the female kind) magazine.

In the canon story, Watson fails to recognize Holmes until he takes off the disguise of the elderly bookseller; in Sherlock, John wrongly assumes the old man is Sherlock in yet another of his disguises. This was a clever twist on the original story.

Colonel Sebastian Moran, Moriarty’s right-hand man, the villain of “The Empty House” becomes Lord Moran, the Minister for Overseas Development in “The Empty Hearse”, who will push the button to detonate the bomb and blow up the Houses of Parliament.

One of the mysteries in the original stories is that Holmes mentions “the giant rat of Sumatra, a story for which the world is not yet prepared” in “The Adventure of the Sussex Vampire”. The giant rat of Sumatra is never mentioned again which makes it all the more intriguing and it has entered Sherlockian folklore. The reference is incorporated into this episode – Sherlock describes Lord Moran as “the big rat” and the tube station (built but never used), where the missing tube carriage and the bomb are hidden, directly under the Houses of Parliament, is located in Sumatra Road.

I loved some of the lighter touches. Sherlock’s turn as a French waiter, complete with a French accent, and his frustration and disappointment when John fails to recognize him, were an absolute delight. And I loved our introduction to Molly’s new boyfriend, Tom. Tom walks into 221B Baker St, a younger version of Sherlock – with similar facial features, an identical coat, and a scarf tied in the same fashion. The resemblance is uncanny and everyone notices – except Molly. “I’ve moved on” asserts Molly confidently, totally oblivious to the fact that she is engaged to a Sherlock doppelganger! 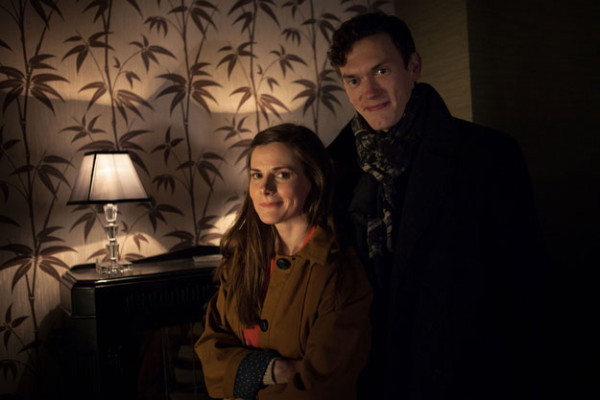 Right at the end of the episode, in the closing sequence, we get the briefest introduction to the new villain, Charles Augustus Magnussen, played by Lars Mikkelsen. We get a close-up of his eyes watching a bank of TV screens, all showing Sherlock rescuing John from the bonfire. Sherlock is under surveillance and being watched by someone – someone who wishes him harm? We shall see …

In summary, I would say this excellent episode far exceeded my expectations. As regards The Fall, I never really cared how Sherlock did it or why he did it – I am just pleased as punch to have Sherlock back in London and on our TV screens. Welcome back to London Sherlock – it feels like you’ve never been away!

The second episode of Sherlock, “The Sign of Three”, screened on Sunday 5 January on BBC1 at 8.30pm.

My Sherlock spoiler-free preview of Series 3 giving you a tantalizing taste of what is in store is here:
http://mycroft-brolly.livejournal.com/418607.html
http://vadamagazine.com/06/12/2013/entertainment/sherlock-s3-preview
Collapse