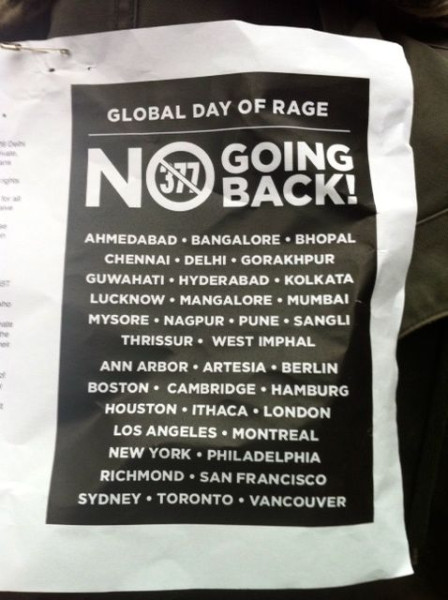 Over the last fortnight India took a huge step backwards on the road to LGBT and gay equality by recriminalising homosexual acts between consulting adults.

India's gay sex ban "worst event to happen in global gay rights"
In one fell swoop, the Supreme Court ruling on homosexuality has recriminalized the lives of 17.5% of the world's gay population.
http://www.gaystarnews.com/article/indias-gay-sex-ban-worst-event-happen-global-gay-rights111213

To protest against the recriminalisation of gay sex, worldwide protests took place last Sunday (15 December), including one in London which I went along to (both the photos above are from the London protest).

Read about the global fightback here:

India gay sex ban: The global fightback begins.
The controversial penal code 377 was reinstated in India last week and protestors worldwide came out in force to show their disapproval on Sunday.
http://www.gaystarnews.com/article/india-gay-sex-ban-global-fightback-begins181213

There is a further protest planned in London for Saturday 11 Jan 2014 from 2pm to 5pm and I will attending. The hashtags to use for the protest are #LGBTIndiaProtest and #repeal377 and the event details are here:
http://on.fb.me/1cmdbn8

As part of the global day of rage to protest India's gay sex ban, and to raise awareness about the Supreme Court of India's decision to ban gay sex, Kanwar Anit Singh Saini took the photo below showing a gay Sikh kiss and posted it onto his "Sikh knowledge" Facebook page. Facebook removed the image because it "violates our terms and policies" and Saini's profile was suspended for 12 hours. Facebook has now reinstated the photo but I am sharing it to raise awareness and because Facebook was wrong to remove it in the first place. 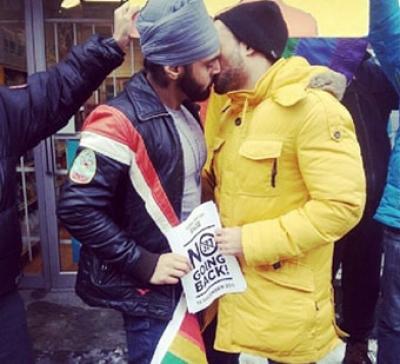