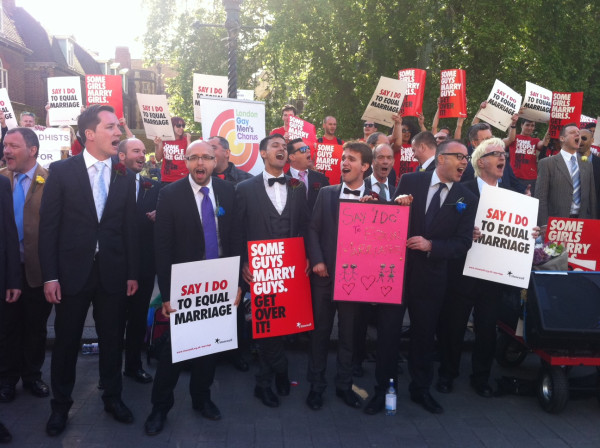 Vada Magazine has an interactive Advent Calendar and Vada asked each of its contributors for a special Christmas feature. For my Vada Advent feature, I chose to write about my personal highlight of 2013: Equal Marriage. The passing of the Equal Marriage legislation for England and Wales was a defining moment in the fight for LGBT equality and a victory for love and equality.

My Vada Advent feature was published on 3 December so my special Christmas feature can be found behind Day 3 of Vada's Advent Calendar. The Vada Magazine interactive Advent Calendar is here:
http://vadamagazine.com/05/12/2013/vada-that/advent-calendar

This feature was first published in Vada Magazine here:
http://vadamagazine.com/03/12/2013/vada-that/advent-3

As my Advent feature, I decided to write about my highlight of 2013 – the passing of the Equal Marriage legislation for England and Wales, a defining moment in the fight for LGBT equality, and a victory for love and equality.

This year, as the Marriage (Same Sex Couples) Bill for England and Wales made its way through Parliament and became law, I was in a unique position. For the first few months of the year I was a volunteer with the Peter Tatchell Foundation, and Equal Marriage was one of their key campaigns at that time. In May and June, as the Bill progressed through Parliament, I was an intern at Gay Star News reporting on the Equal Marriage story as it happened. And as an individual, I attended most of the Equal Marriage rallies because I wanted to show my support for Equal Marriage. I felt very strongly that it was the right thing to do.

Equal Marriage is important to me because I have always been passionate about Equality and Diversity, and I spent a significant chunk of my Civil Service career working on Equality issues. Equal Marriage is, first and foremost, an issue of equality. In a democratic society, everyone (regardless of ethnicity, sexuality, gender, age, disability, religion and belief) should be equal under the law and have equal rights under the law.

Banning LGBT people from marriage devalues their love and makes them second class citizens. Everyone, LGBT and straight, should have the right to marry the person whom they love in a civil and/or a religious ceremony. No religious organization should be forced to do so but there are a number of religious organizations who wish to be inclusive and to conduct same sex marriage ceremonies. For many couples, celebrating their love in front of friends and family, and having that love recognized and acknowledged, is an important milestone and shows they are making a long-term and lasting commitment to their partner.

There are two key events that remain fresh in my memory and will stay with me for a long time to come. The events were Equal Marriage rallies that took place outside the Houses of Parliament on consecutive days as the House of Lords debated and voted on the Marriage (Same Sex Couples) Bill.

These rallies outside Parliament were important because Equal Marriage supporters, by providing a visible and vocal presence, were showing Parliamentarians how important Equal Marriage was to people and the strength of feeling on the issue. People cared deeply about this issue because it directly affected and impacted on their lives.

The first event was the Equal Marriage rally held on the evening of Monday 3rd June and featuring the London Gay Men’s Chorus. On that evening, Equal Marriage supporters far outnumbered its opponents – there were around 500 Equal Marriage supporters and only a very small handful of Equal Marriage opponents. The presence of the London Gay Men’s Chorus, dressed in morning suits, the traditional attire for weddings, and singing wedding songs like “Get me to the Church on time”, turned the rally into a Carnival, a feast of song and dance, and created a real celebratory party atmosphere. It was one of the most uplifting, inspiring and fun rallies I have ever attended. I left the rally happy, with a spring in my step and a song in my heart.

As soon as the news of the vote came through, the Equal Marriage supporters greeted the news by cheering loudly, waving their Rainbow flags proudly, blowing their whistles, and starting a conga-line dance. The vote was expected to be close but there had been a landslide in favour of Equal Marriage. I was elated and completely overwhelmed. The Lords vote restored my faith and belief in British Parliamentary Democracy.

The passing of the Equal Marriage legislation for England and Wales in 2013 was a victory for love and equality. It went some way towards restoring my faith in humanity by showing that right can, and will, win through in the end. I feel very privileged to have attended these Equal Marriage rallies and to have been present at a defining moment in the fight for LGBT equality and, more generally, British history. 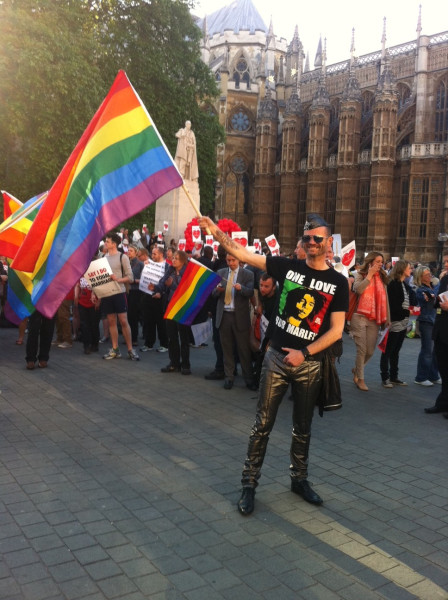